There are a variety of metrics to evaluate to have high confidence in quality. Unit test coverage gives us high confidence at source code level. For example using Angular CLI, a placeholder spec file is auto-generated for a given component. In contrast E2E tests can cover an interaction of components; whether these are state transitions -think of state machines-, feature use cases, application workflows or any combination of using multiple components at a time. This is where they provide the most value. Once we have a decent amount of unit test coverage, we cover our cases with ui-e2e tests, with green pipelines we can have high confidence in quality.

You can follow along with the working repo at https://github.com/muratkeremozcan/angular-playground.

Originally the repository was Siemens internal and used GitLab. It got migrated to Github and CircleCI, but the Gitlab files have been left-in for a reference. Technically, this repo can be dropped in at gitlab.com and it would work, granted the runner tags are modified.

By now there are a plethora of examples and resources on combined code coverage. We wanted to study a CI agnostic, real life example with a particular stack, without reliance on external services, and explain the why behind the decisions that are being made.

Jest can be replaced with Karma; all we need from unit tests is the default coverage folder to be generated.

Baseline assumption: unit tests are able to generate a coverage folder when executed. This is the default folder that unit test frameworks use.

The sample bash commands can be used with any CI provider.

The npm packages that will be used in this guide are:

Cypress does not instrument the code for you out of the box. This is the first hurdle to overcome.

If your development framework is not Angular, Cypress docs guide you towards nyc or babel-plugin-istanbul.

To instrument the code using Angular, things are not very straightforward. Check out Cory Rylan's and Jonas Bandi's blog posts.

Thankfully there is a way to extend Angular CLI's build process to instrument the code, with a bit of reliance on webpack. We need to install a few packages and configure them.

Our code has been instrumented. Now we want to execute one or many e2e tests and collect the generated coverage.

Note: to collect coverage from e2e tests, your application must be served locally and tests be running against localhost as opposed to a live url.

At this point, when executing e2e tests we should see additional before and after blocks.

Now we have to extract certain files from coverage & coverage-e2e folders and combine them into a single report.

Note the examples are with yarn. For npm, you can replace yarn with npm run or npx

We wrap up by combining the 3 scripts. Here is the full list with some additional utilities to clean up coverage folders and evaluate combined coverage. We will elaborate on coverage:check script in the next section

The local workflow is as such:

We are confident in the newly acquired knowledge on local machine combined coverage. How do we use them in CI in a stateless, lightweight fashion that is not intrusive and supports parallel e2e jobs?

Here is the full GitLab yml. The bash should be CI agnostic.

At this point We have our e2e job coverage collection folder as an artifact. It will be available in subsequent stages. All we need is a new stage to do the chore of combining the coverage and evaluating it.

In the figure we have unit, e2e and combined coverage.

In this new application, with ~70 tests, the unit test coverage is pretty high at 93%. We have 5 e2e tests in this suite, and the coverage they provide is pretty significant at 84%. Mind that the e2e coverage also factors in multiple internal 3rd party modules that is not a part of the source code, but a part of the application.

The combined coverage is at 96%. Using this as a guide we can visualize where the gaps are and supplement them using either e2e or unit tests.

With Jest, the time to execute the 70 unit tests locally is under 50 seconds. With Cypress, the time to execute the e2e tests locally is under 45 seconds. Of note is Jest being parallelized in CI or local environments, and Cypress having parallelization capability in CI. The lines of code comparison between unit and e2e is 7:1 ; there are 7 times as much loc in unit tests compared to e2e.

The main value of e2e tests is not source-code coverage. Like we stated in the beginning they give us value for an interaction of components, state transitions, feature use cases, application workflows or any combination of using multiple components at a time. Albeit, if they also provide source-code coverage, they can help in filling the gaps in source code coverage and guide us towards measurable progress in order to have higher confidence in quality. 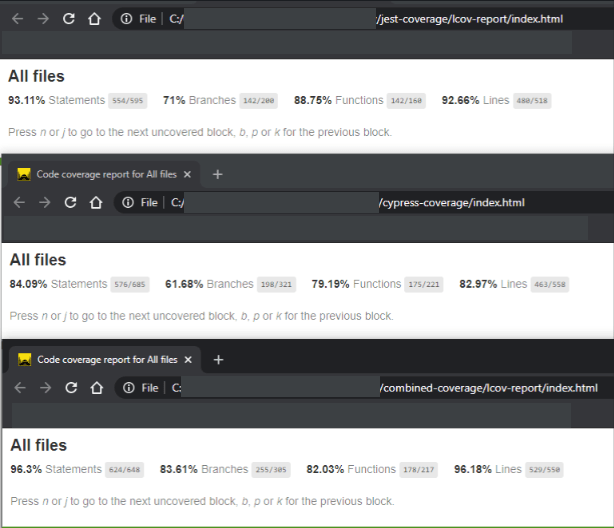 We were able to follow Cypress guide to instrument our Node API and combine coverage when both the UI and the API are being run locally. In our world, these are in different repositories. This can work in CI if the two are in the same repository. We consulted Gleb from Cypress on a recommendation. The verdict is that "If the server is on another machine and not controlled by you during E2E tests, then I do not see how we can instrument it "on the fly" or get code coverage" . In the future we plan to investigate codecov service on this matter.

A opic that builds from this is html/template coverage to ensure our e2e and component tests also give confidence on our html. At the moment We are unaware of tooling to address this challenge.

Another topic we want to build upon is mutation analysis. If mutation analysis can create multiple mutants (artificial versions of our source code with bugs) and execute unit tests against it to evaluate the quality of our unit tests, we think it may be possible to do the same with e2e tests. We will be in touch with Stryker and Cypress friends on this!

Building an Apache ECharts Dashboard with Angular and Cube

Use Angular directives to extend components that you don't own