GitHub Advanced Security now supports the ability to analyze your code for vulnerabilities from third-party CI pipelines, while previously, instead, this capability was available exclusively with GitHub Actions.

In this post (and video) I will show you how to use Code Scanning to scan a GitHub Repository from an Azure DevOps pipeline using the YAML editor.

Alright, as I've mentioned before, rather than leveraging the native GitHub Actions workflow with the standard “Set Up Workflow” experience, today we are going to use an Azure DevOps Pipeline to scan the Code we have in our GitHub repo.

Let's take a look at the steps we would need to perform to integrate GitHub Advanced Security for Code Scanning with Azure DevOps: 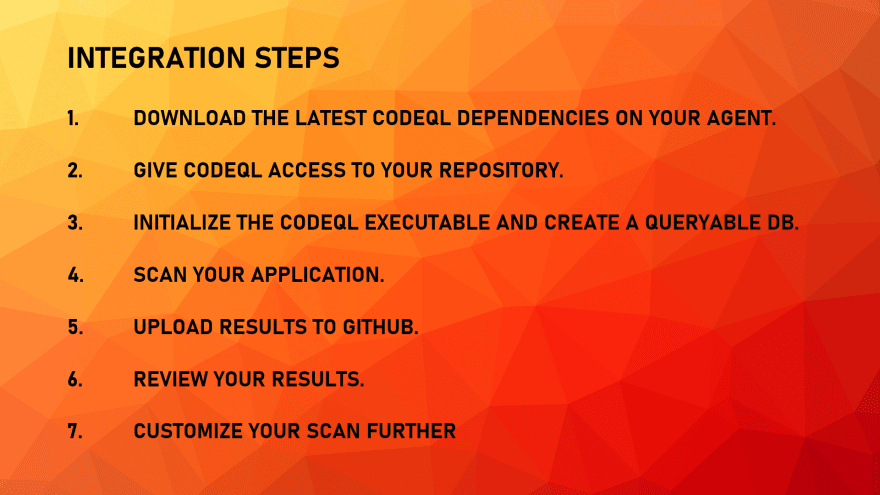 Since the Azure Pipelines Agent I am using is ephemeral, because I'm using the Hosted Agents, I'll have to install the CodeQL package on each pipeline execution. If you are using a self-hosted agent instead consider pre-installing the package to save time and compute resources.

(Link to the video: https://youtu.be/ZgR90vWpBQw)

First thing we have to do, as we have seen in the list of steps, is to Download the latest CodeQL dependencies on my agent.

Since this Pipeline runs on Linux, using wget and targeting the latest Linux release I can download all necessary files to my directory. I also change permissions for the downloaded file before I run it.

Next, we need to give that pipeline full access to our repo. To do so, we need to create a GitHub Personal Access Token. (see how).

For private repositories the token must have the whole repo scope. For public repos, instead, the token needs only the public_repo and repo:security_events scopes.

Then we need to save the PAT as a variable in the Pipeline. Remember to set it as a secret. For security sake, I'd recommend you using Azure KeyVault, save the PAT there and reference it into Azure Pipelines.

Now that we have the GitHub Personal Access Token saved in Azure Pipelines, we can initialize CodeQL.

Let's initialize the CodeQL Executable and create a CodeQL database for the language detected.

Once again we need to add a script step to our workflow:

Replace the YOUR_REPO_NAME placeholder with the whole name of the repo you want to scan, for example "n3wt0n/myrepo"

Also, the $GITHUB_PAT is the name of the variable where I've saved the PAT.

If you want to analyze a compiled language like .Net, Java and so on, remember to execute the build AFTER the CodeQL Init step but BEFORE the Analyze step.

In fact the init step will create a script for you that you have to execute before building your code in order for CodeQL to be able to monitor the build as well.

Finally, I want to populate the CodeQL runner databases, analyze them, and upload the results to GitHub.

Once again, replace the YOUR_REPO_NAME placeholder with the whole name of the repo you want to scan.

Here we also have 2 more parameters:

In my case I retrieve both parameters from variables, which is an approach I would recommend.

And that is basically it.

You can now run the Pipelines and, if successful, you should be able to navigate back to your GitHub repository security tab under code scanning to view the results of your scan.

Check the video for the full explanation and demo

Let me know in the comment section below what you think about this experience. For me, it would of course be even better if we could have native Azure Pipelines tasks instead of having to write shell scripts, but for the time being this work pretty well as well.

Publish an npm to GitHub packages

Customise GitHub Mobile to work better for you: Shortcuts and more