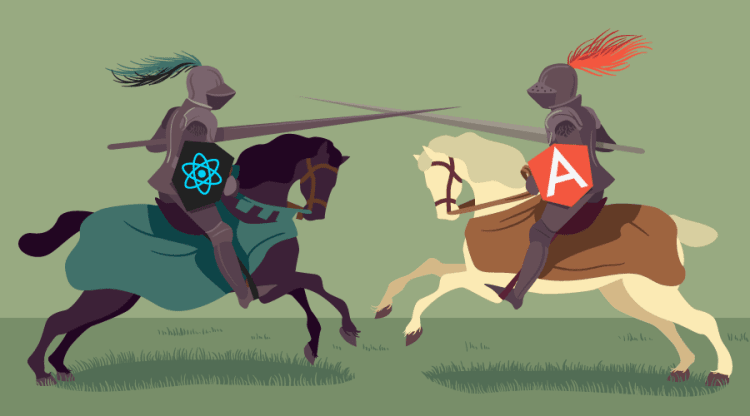 In this post we are going to compare React and Angular and try to find out which one should you use in 2020 in terms of performance, rendering, state management, jobs and many more. React vs Angular comparison is something that all developers want to see.

React is a simple JavaScript based UI library which is managed by the Facebook and community of developers. React was first introduced in the 2013.

On the other hand Angular is an Open source framework for web and mobile development. Unlike React, It is based on the TypeScript and managed by Google Team. Angular was introduced in 2010.

React is mainly used for web development and for the mobile development we need to use additional framework i.e React-Native.

On other hand Angular is also mainly used for web development and for the mobile development it needs an additional framework i.e Native-Script.

If we want to use some extra functionality for example Routing we need to use some additional packages for that i.e React Router in case of React.

But in case of Angular most of the required functionality comes out of the box from Angular.

React is super easy to learn because you only need to learn few basic concepts in React i.e state, props, component, hooks. Its related with the JavaScript so you also not need to worry if you have learned JS already.

With the Angular the learning efforts put by a new developer is definitely gonna more according to most of the developers experience because of there huge framework, TypeScript and Component Managment.

React’s performance is greatly improved with the introduction of the virtual DOM. Since all virtual DOM trees are lightweight and built on server, the load on browser is reduced.

Performance of an Angular app is most of the times is pretty less with comparison to React. But with the latest updates in Angular the performance is started increasing but it’s still hard to surpass React.

Above image is taken on 10–04–2020. As you can see the market share of jobs is almost similar for both Angular and React. But Angular is old so there is chances of Angular Jobs are little bit high. But i will personally prefer to use React.

I hope you have likes the comparison of React vs Angular.

Narender Saini
I am Senior Reactjs developer with 4 year of experience. Apart from freelancing work I am a mentor teaching 100's of students around the globe. I love to share knowledge regarding Reactjs.
How to add less and svg support to Nextjs
#react #html
How to make wiggly div in React
#react #javascript #css
Generate pdf from dom with multiple pages and without cutting
#react

Once suspended, narendersaini32 will not be able to comment or publish posts until their suspension is removed.

Once unsuspended, narendersaini32 will be able to comment and publish posts again.

Once unpublished, all posts by narendersaini32 will become hidden and only accessible to themselves.

If narendersaini32 is not suspended, they can still re-publish their posts from their dashboard.

Once unpublished, this post will become invisible to the public and only accessible to Narender Saini.

Thanks for keeping DEV Community 👩‍💻👨‍💻 safe. Here is what you can do to flag narendersaini32:

Unflagging narendersaini32 will restore default visibility to their posts.