We are all aware of Machine Learning tools and cloud services that work via the browser and give us an interface we can use to perform our day-to-day data analysis, model training, and evaluation, and other tasks to various degrees of efficiencies.

But what would you do if you want to do these tasks on or from your local machine or infrastructure available in your organisation? And, if these resources available do not meet the pre-requisites to do decent end-to-end Data Science or Machine Learning tasks. That’s when access to a cloud-provider agnostic deep learning management environments like Valohai can help. And to add to this, we will be using the free-tier that is accessible to one and all.

We will be performing the task of building a Java app, and then training and evaluating an NLP model using it, and we will do all of it from the command-line interface with less interaction with the available web interface — basically it will be an end-to-end process all the way to training, saving and evaluation of the NLP model. And we won’t need to worry much about setting up any environments, configuring or managing it.

We will learn to do a bunch of things in this post covering various levels of abstractions (in no particular order):

What do we need and how?

Here’s what we need to be able to get started:

The how part of this task is not hard once we have our goals and requirements clear, we will expand on this in the following sections.

NLP for Java, DL4J and Valohai

We have all of the code and instructions needed to get started with this post, captured for you on github. Below are the steps you go through to get acquainted with the project:

To quickly get started we need to do just these:

Now you’re ready to start using the power of performing Machine Learning tasks from the command-line.

See Advanced installation and setup section in the README to find out what we need to install and configure on your system to run the app and experiments on your local machine or inside a Docker container — this is not necessary for the purpose of this post at the moment but you can try it out at a later time.

You will have noticed we have a valohai.yaml ****in the git repo and our valohai.yaml the file contains a number of steps that you can use, we have enlisted them by their names, which we will use when running our steps:

Assuming you are all set up we will start by building the Java app on the Valohai platform from the command prompt, which is as simple as running one of the two commands:

And you will be prompted with the execution counter, which is nothing by a number:

Note: use --adhoc only if you have not setup your Valohai project with a git repo or have unsaved commits and want to experiment before being sure of the configuration.

You can watch your execution by:

### the parameter 1 is the counter returned by the vh exec run build-cpu-gpu-uberjar operation above, it is the index to refer to that execution run

and you can see either we are waiting for an instance to be allocated or console messages move past the screen when the execution has kicked off. You can see the same via the web interface as well. Note: instances are available based on how popular they are and also how much quota you have left on them, if they have been used recently they are more likely to be available next.

Once the step is completed, you can see it results in a few artifacts, called outputs in the Valohai terminology, we can see them by:

### Run vh outputs --help to find out more about this command

We will need the URLs that look like datum://[….some sha like notation…] for our next steps. You can see we have a log file that has captured the GPU related information about the running instance, you can download this file by:

### Run vh outputs --help to find out more about this command

We will use the built artifacts namely the uberjars for the CPU and GPU backends to run our training process:

### Note these datum:// link will vary in your case
### Run vh exec run train-cpu-linux --help to get more details on its usage

Note: take a look at the Inputs with Valohai CLI docs to see how to write commands like the above.

We can watch the process if we like but it can be lengthy so we can switch to another task. 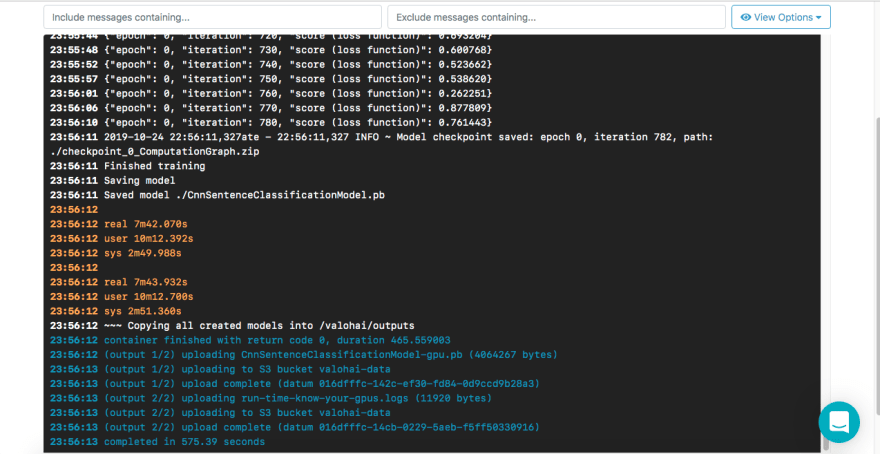 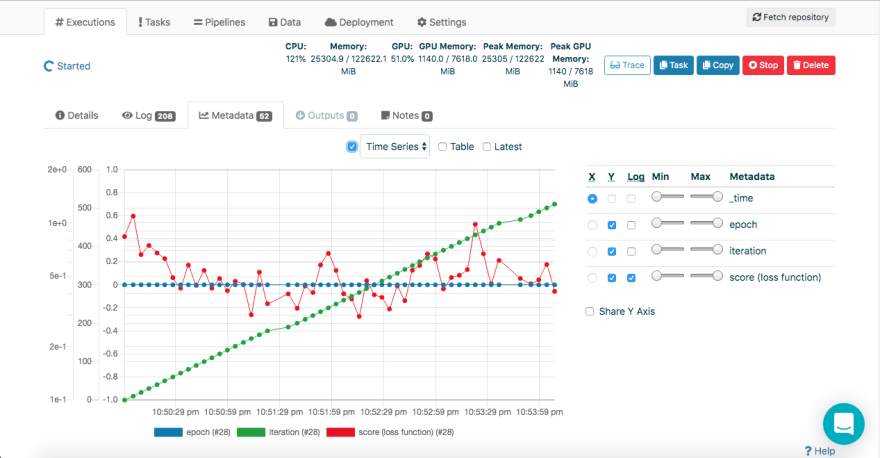 The above execution runs finish with saving the model into the ${VH_OUTPUTS} folder to enable it to be archived by Valohai. The model names get suffix to their names, to keep a track of how they were produced.

At any point during our building, training or evaluation steps, we can stop an ongoing execution (queued or running) by just doing this:

Downloading the saved model post successful training
We can query the outputs of execution by its counter number and download it using:

Evaluating the saved NLP model from a previous training execution

### Note these datum:// link will vary in your case
### Run vh exec run train-cpu-linux --help to get more details on its usage 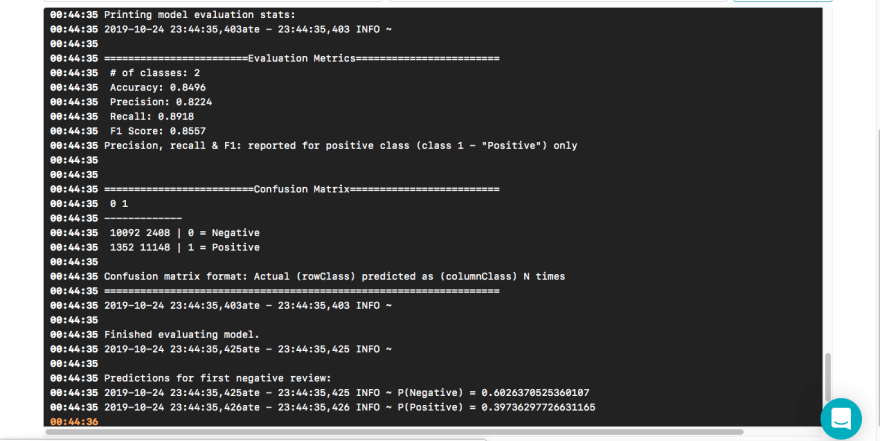 Note: the source code contains ML and NLP-related explanations at various stages in the form of inline comments.

Capturing the environment information about Nvidia’s GPU and CUDA drivers

This step is unrelated to the whole process of building and running a Java app on the cloud and controlling and viewing it remotely using the client tool, although it is useful to be able to know on what kind of system we ran our training on, especially for the GPU aspect of the training:

Keeping track of your experiments

Comparing the CPU and GPU based processes

We could have discussed comparisons between the CPU and GPU based processes in terms of these:

But we won’t cover these topics in this post, although you have access to the metrics you need for it, in case you wish to investigate further.

Please also have a look at the README.md file for further details on their usages and other additional information that we haven’t mentioned in this post here.

If we have noticed all the above tasks actually was orchestrating the tasks via a few tools at different levels of abstractions:

You are basically orchestrating your tasks from a single point making use of the tools and technologies available to do various Data and Machine Learning tasks. 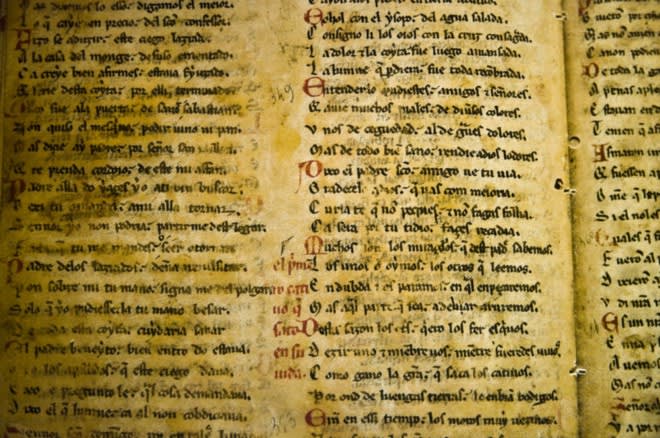 We have seen that NLP is a resource-consuming task and having the right methods and tools in hands certainly helps. Once again the DeepLearning4J library from Skymind and the Valohai platform have come to our service. Thanks to the creators of both platform. In addition, we can see the below benefits (and more) this post highlights.

We gain a bunch of things by doing the way we did the things above:

As a software engineer, ML engineer, data scientist, I felt very productive and my time and resources were effectively used while doing all of the above, and above all I can share it with others and everyone can just reuse all of this work directly - just clone the repo and off you go.

What we didn’t cover and is potentially a great topic to talk about, is the Valohai Pipelines in some future post!

Mani Sarkar is a passionate developer mainly in the Java/JVM space, currently strengthening teams and helping them accelerate when working with small teams and startups, as a freelance software engineer/data/ml engineer, more….

Once suspended, neomatrix369 will not be able to comment or publish posts until their suspension is removed.

Once unsuspended, neomatrix369 will be able to comment and publish posts again.

Once unpublished, all posts by neomatrix369 will become hidden and only accessible to themselves.

If neomatrix369 is not suspended, they can still re-publish their posts from their dashboard.

Once unpublished, this post will become invisible to the public and only accessible to mani.

Thanks for keeping DEV Community 👩‍💻👨‍💻 safe. Here is what you can do to flag neomatrix369:

Unflagging neomatrix369 will restore default visibility to their posts.