If you are familiar with low-level programming languages, like C or C++ or ASM, you might recall how memory management is done there. Basically, your application code has to estimate how much memory it will require for a data structure, ask the OS to allocate that memory as a contiguous memory block, access "cells" of that block separately (prepare/read/write) and, when no longer needed, release (free) that memory block explicitly. If you forget to release that memory block, you have a memory leak, which will eventually consume all the RAM you have.

In JVM life is a lot easier. Writing Java code you only have to worry about WHATs.

The JVM takes care of all of the HOWs (except for arrays - you still need to know how many items (not bytes though) they are to contain). It will estimate how many bytes you require and allocate those memory blocks for you. Will it allocate contiguous memory blocks? You don't know. Will it allocate memory in CopyOnWrite fashion? You don't know. And you don't need to worry about those details. Worry about WHAT will you do in your code next instead.

JVM has its own understanding of what the memory layout should look like. JVM divides all the memory it requires into pools. Note the highlighted "requires". It does not take up all the memory or most of the memory. It only consumes the memory it requires. And demands for each pool are different. Some are accessed more often, others - less often. Some change their contents completely several times per second, others - keep the same content until the application exits. Some contain gigabytes of memory, while others only a few megabytes.

At runtime, your code will ask the JVM to access all those pools for different reasons: calling a method (function), creating a new object, running the same algorithm over and over, some pools' saturation reached 100%, and so on. It's a somewhat complex system, doing its best to keep your code comfortable, not worrying about HOW (or WHEN) to get or release memory.

Memory pools are divided into 2 groups: Heap and non-Heap.

Consider the image below. It displays the principal layout of JVM memory pools. 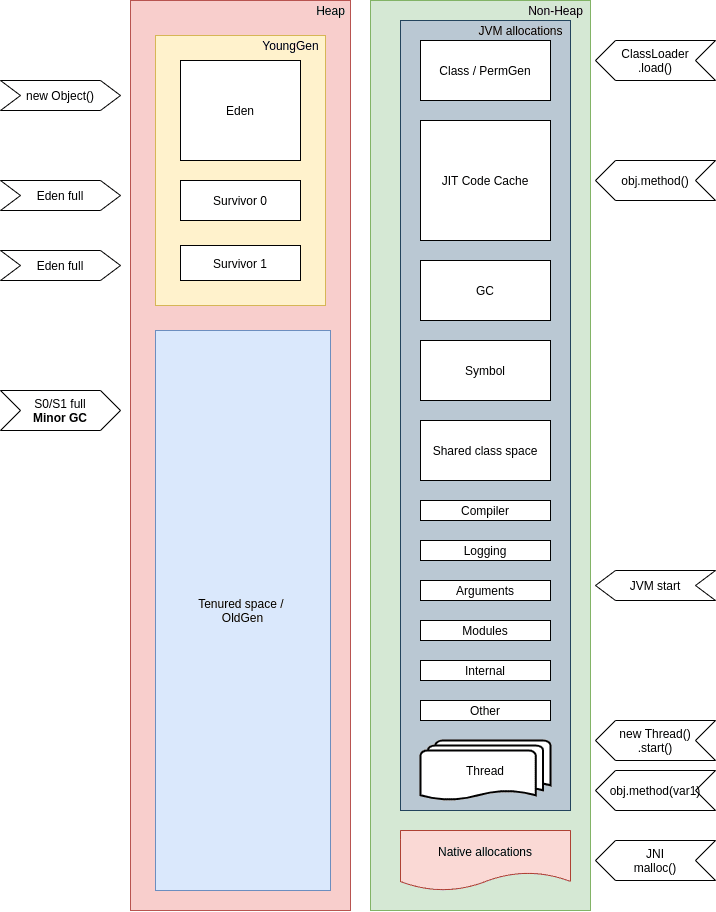 Labels hint in what cases data is allocated in each pool.

Heap is where your data structures (objects) are stored in. It is usually the largest portion of the JVM memory. Heap itself is divided into 2 main sections:

Eden is where objects are initially created. They stay in Eden for some time - for as long as there is room in this pool - and then the decision is made to either keep them or discard them releasing their memory. If the object is discarded - poof - the memory is no longer allocated and it's freed (in a way). If, however, the object is still used in your java code, it will be tagged with the "survivor" label and moved over (promoted) to the next memory pool - Survivors.

There are 2 survivor regions: s0 and s1. One of them is usually empty, while another one is being filled up, and when it fills up, they switch who is empty and who is not. Suppose objects from Eden were promoted to S1. All the other objects that survive Eden will come to stay at S1 for as long as there is any room in S1 pool. When S1 fills up, an inspector comes and checks each and every object in the S1, labelling objects that are no longer required in your java code. All the objects that got tagged are immediately released. The remaining objects get a medal for surviving the S1 and are moved over to the S0 region. In the meantime, all the objects that survive Eden are now promoted to S0 too. When S0 becomes full, the same inspection takes place, and then survivors are moved to S1 with one more medal. When a survivor gets enough medals, it's ranked as a long-living survivor and it is promoted to the ultimate memory pool, where only long-living objects are stored: the OldGen.

OldGen is usually the largest pool in the Heap. It contains long-living objects, veterans, if you will, that have been serving for a long time. They are so-called mature objects. As more and more objects mature, the OldGen will become more and more populated.

This is the mysterious part of the JVM memory. It's difficult to monitor it, it's small and people usually don't even know it exists, not to mention knowing what it's used for.

PermGen (Permanent Generation) is a region that was used until java8. It was renamed as Metaspace since java8 and got its limits lifted. PermGen stores classes' metadata (hence the metaspace). Not the Class<?>.class instances (they are stored in Heap, along with other instances), but just the metadata. Class metadata describes what's the class called, what's its memory layout, what methods it's got, static fields and their values. Everything static is stored in PermGen/Metaspace. When a class loader is created, it gets a memory region allocated in PermGen, for that classloader's classes' metadata. Each classloader has its own region, that's why classloaders do not share classes.
PermGen is an area that is fixed in size. You have to specifically tell the JVM (unless you are satisfied with the defaults) in advance how large PermGen you would want, and, once reached the limit, an OutOfMemoryException is thrown. Also, it was permanent - classes, once loaded in, could not be unloaded. This became a problem when more and more applications, libraries and frameworks began to rely on bytecode manipulation. Since Java8 this region was renamed as Metaspace and the limit was lifted. Metaspace can grow as large as it likes (or as long as there is memory on the host platform). This growth can be limited with JVM parameters.

As the JVM runs, it keeps on executing the same parts of the code over and over again - some parts of the code are hotter than others (HotSpots). Over time, JVM notes down the sets of instructions that keep on recurring and are a good fit for optimization. These sets of instructions might be compiled into native machine code, and native code no longer runs on the bytecode interpreter - it now runs directly on the CPU. That is a great performance boost, improving the performance of those methods at magnitudes of 10s or 100s or, in some cases, even more. The compilation is done by the JIT (Just-in-Time) compiler, and the compiled machine code is stored in the JIT code cache region.

This is a tiny region that the Garbage Collector uses for its own needs.

This space contains field names, method signatures, cached numeric values and interned (cached) Strings. Numeric compile-time literals (5, 50L, 3.14D, etc.) are cached and reused by the JVM in order to preserve memory (literals are immutable, remember? They are static final). A similar thing happens with Strings too. Moreover, Strings can be interned manually, at runtime: if the String.intern() method is called, it will be cached too. Next time a string with the same contents is referenced, the interned String instance will be used instead of creating a new String object. If this region starts growing too large, it might mean that your java code is interning too many different strings.

This is a small memory region that stores .jsa files - java classes' data files, prepared for fast loading. This region is used to speed up JVM startup, particularly the part of the startup where system libraries are loaded. It doesn't have much of an impact during runtime.

This region is used by the JIT Compiler. It's a working area for the compiler - it does not store the compiled machine code.

Unfortunately, Java docs are not very wordy when it comes to this region. They only say that this region is used for logging. We can only assume it's used actively during runtime, but it's unclear what problems can occur when this region is overutilized.

This is also a tiny region, that stores command-line arguments of the java.exe command. This memory does not play any significant role at runtime, as it's mainly populated during boot-time.

Quoting the Java docs: "Memory that does not fit the previous categories, such as the memory used by the command line parser, JVMTI, properties, and so on"

Quoting the java docs: "Memory not covered by another category"

This region can potentially cause problems, especially in heavy-duty applications. This area contains threads' meta info. Whenever a thread calls a method, JVM pushes the called method's signature (stack frame) to that thread's Stack, located in the Thread (JVM Stack) area. References to all the passed method parameters are also pushed along. The more threads you have and the deeper the stacks these threads have the more memory will they require in this region. Stack size can be limited per thread with JVM parameters, but there is no way to limit the number of threads. This effectively means, that uncontrolled proliferation of threads might exhaust your system memory (it's off-heap, remember?).

This is a tiny region used by the java's NativeMemoryTracking mechanism, for its internal needs. NMT is a feature you want to be enabled if you have memory usage concerns. It's a feature of the JVM that allows us to see what is actually happening off-heap, as there are no other ways to reliably observe off-heap memory usage. However, enabling NMT adds ~10% performance penalty, so that is not something you might want to use in a live production system on daily basis.

If off-heap is a memory that is not stored in Heap regions (and not restricted by Heap limits), the Native Allocations region can be seen as off-off-heap. It is a part of the memory that the JVM does not manage at all. At all. There are very few ways to reach this memory from your Java code (DirectByteBuffer or ByteBuffer.allocateDirect()). This part of memory is extensively utilized when developing hybrid Java applications, using JNI - java applications, that are also using components written in C/C++. This is often the case in high-throughput java applications and Android development, where some components are developed in native code to boost performance.

Most of the regions are uncapped, meaning they can grow without any limits. Usually, it's not a problem, as most of those regions are used by internal JVM mechanisms and the memory is very unlikely to leak. However, the Native Memory pool, used by JNI and JNA as well as direct buffers in the Java code, are more likely to cause memory leaks here.

Heap is rather easy to monitor. Heap usage is tracked closely by default, you just need tools to access that information. See here for more info.

It's difficult to monitor off-heap memory. It's advised to monitor this 'dark side of the JVM' only when required, i.e. when there are memory-related problems you are trying to debug. That is, because the method, that gives you the best visibility of off-heap memory, NMT, adds 2 words to each malloc(), which approx ends up in 5-10% overall performance penalty.

Java for beginners: Installation of Java

Once suspended, netikras will not be able to comment or publish posts until their suspension is removed.

Once unsuspended, netikras will be able to comment and publish posts again.