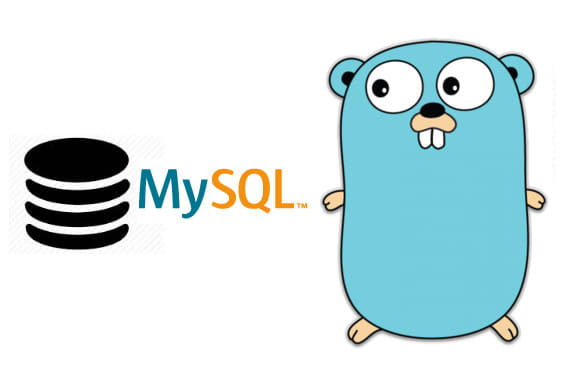 How To Get Results Using Golang with MySQL Database

Using the standard Go SQL driver package, you can easily communicate with databases, including MySQL, MongoDB or any of the other databases within the list of Golang database drivers.

The SQL standard package provides a generic interface that exposes many common methods and interfaces that you can use to access and work with databases.

For example, if you need to connect to MySQL then you would use the generic SQL package that exists in the Golang standard library and also a MySQL specific package which makes use of the standard library package methods and interfaces.

Basically, what it does is execute the Register function code before anything else in the package, inside the init() function, another function from the SQL package called sql.Register(), which takes two arguments. The first argument is a string representing the type of driver that you would like to use, in this case "mysql" and the second argument is an object which represents the actual driver which interacts with the database and handles the particular database functionality.

The SQL package is the standard database SQL package which exists in the Go standard library. Because the init() function gets executed before anything else, you know for sure that whenever you include package MySQL in your code, this code will get executed right away.

On of the first functions to use when working with databases, is sql.Open(), which is used to obtain a database object, the database object is what you use to execute queries and commands against your database. The first argument to sql.Open() is the database driver you're trying to load. In this case the name of the driver is "mysql", the second argument is a connection string we would use to connect to the database.

The sql.Open() function will return a handler to our database connection which you can then use to issue queries and commands to your database.

The sql.Open() function will also return an error object, which would be nil, if no errors were observed.

On the MySQL driver Github page, you can find a full description of the connection strings which you can use as an argument to the sql.Open() function.

Now you are ready to have fun with Golang and MySQL.

To read data with the standard database SQL package, you would use the Query() method, to retrieve a result set of multiple rows, whereas if you need to only retrieve a single row from your query, you would use use a QueryRow() method.

The Query() method returns a pointer to an object type called Rows, which is basically a struct that supports some useful methods, the Rows object type can be used to scan and iterate over the data returned from your query.

For this basic example, in your code, you would create a struct, which would hold the data returned from your query.

You would start by calling sql.Open() with the appropriate parameters, to get the database handler.

Use defer db.Close(), in order to be sure your database connection gets closed.

When calling sql.Open(), there is also an option to include the parseTime=true parameter, which enables translating date and date/time fields from your database to the Golang time object type. Using the parseTime=true parameter changes the output type of DATE and DATETIME values to time.Time instead of []byte / string.
In essence, you would be telling the MySQL driver that you would like to convert any MySQL date or date/time fields to the Golang time object by appending parseTime equals true as a property to your connection string.

Now you can create a function to retrieve product information and scan the results into your Product struct.

QueryRow() executes a query that is expected to return at most one row. QueryRow() always returns a non-nil value. Errors are deferred until Row's Scan method is called.

In the SQL statement above, the "?" is used in a parameterized query to replace the ProductCode variable.

Next, all that's left to do, for this simple example, is to print out the results of our query:

Our getProduct() function takes a string, productCode and returns an error, which would be nil, when there is no error.

When you call getProduct("g43") for example, the database query is executed, looking for productCode = to "g43" and returns the results ...

Hopefully this simple example is enough to help you understand how to use databases with Golang.

‌Introduction To GraphQL Server With Golang

Trending on DEV
Scrape Everything! Building Web scrapers with Python and Go
#python #webscraping #go #github
What does you do, when you need a desktop version of your existing SPA web app? 💡
#go #svelte #node #tutorial
What Do You Find Difficult about SQL and Databases?
#discuss #sql #database
🚀 Visualizing memory management in Golang
#go #garbagecollection #programming #computerscience
🔥 Battle for the Bundling time: esbuild — a JavaScript bundler and minifier written on Golang
#go #node #javascript #news
Introduction to gRPC: why, what, how?
#grpc #beginners #go #java
Big Data from the Ground up
#database #beginners #sql #architecture