This article originally published at jarednielsen.com.

This article is part of a series on Big O notation. If you’re just joining us, you may want to read the previous article, Big O Recursive Space Complexity, or start at the beginning with What is Big O Notation?.

What Problem(s) Does Dynamic Programming Solve?

There are two criteria for a dynamic programming approach to problem solving:

What is optimal substructure?

The solution to a larger problem can be found by combining the returned values of its smaller problems.

Like recursion and proof by induction, we recognize a pattern and apply the same approach to solving the parts as we would the whole.

What are overlapping subproblems?

The solution to a larger problem recognizes redundancy in the smaller problems and caches those solutions for later recall rather than repeatedly solving the same problem, making the algorithm much more efficient.

Both of these concepts will click when we refactor our naive sum of Fibonacci sequence algorithm.

☝️ This might sound a lot like divide and conquer, but divide and conquer algorithms, such as merge sort and quick sort, don’t solve overlapping subproblems. They continually divide a problem into smaller, yet new, problems, then recombine the smaller solutions into a solution to the larger problem.

There are two approaches for implementing a dynamic programming solution:

The top-down approach is generally recursive (but less efficient) and more intuitive to implement as it is often a matter of recognizing the pattern in an algorithm and refactoring it as a dynamic programming solution.

We refer to top-down solutions as memoization and bottom-up as tabulation.

We’ll look at the reason for these terms below.

But first, a quick refresher.

We’ll revisit our naive recursive sum of Fibonacci sequence for this tutorial. If you’re just joining us, you may want to first read Big O Recursive Time Complexity.

The sum of the Fibonacci sequence is a contrived example, but it is useful (and concise) in illustrating the difference between memoization and tabulation and how to refactor a recursive function for improved time and space complexity.

Here’s our naive implementation of the sum of the Fibonacci sequence.

Why is it naive?

Because the runtime is really bad.

Take a look at this diagram of our recursive call branches. 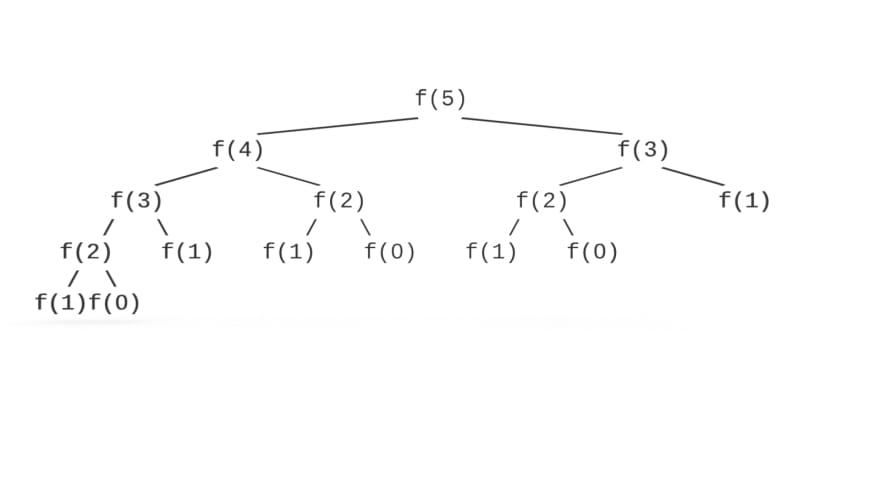 Why is this algorithm inefficient?

We solve the same problems repeatedly in our branches. 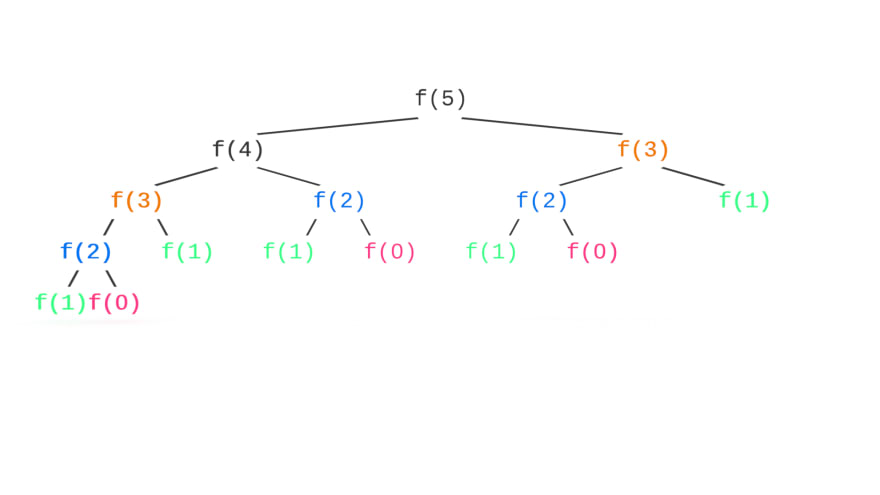 The answer to all of the above is: too many!

Memoization is the top-down approach to solving a problem with dynamic programming.

It’s called memoization because we will create a memo, or a “note to self”, for the values returned from solving each problem.

Then, when we encounter the same problem again, we simply check the memo, and, rather than solving the problem a second (or third or fourth) time, we retrieve the solution from our memo.

Where have we seen this, or something like it, before?

We now pass our function a memo argument and initialize it as an array.

Each time we recursively call fibDown(), we pass it the memo array.

If the value of memo[n] is undefined, meaning there’s no value stored in that index yet, we assign that value the returned values of fibDown(n - 1, memo) + fibDown(n - 2, memo).

Because we don't solve the overlapping subproblems.

This is a big improvement over the naive implementation.

With bottom-up, or tabulation, we start with the smallest problems and use the returned values to calculate larger values.

We can think of it as entering values in a table, or spreadsheet, and then applying a formula to those values.

Where have we seen this, or something like it, before?

This solution is very similar to a swap algorithm.

We declare three local variables, x, y and tmp and then juggle the values.

What is the Big O of fibottomUp()?

Like memoization above, the time complexity is also O(n).

We are using a for loop to iterate over the value of n.

But the space complexity is O(1).

We are only pushing one call to the stack.

Which is better? Memoizaiton or tabulation?

If we don’t need to solve all the problems and are just looking for the optimal solution, memoization is better.

If we do need to solve all the problems, that means we are going to make a lot of recursive calls, and tabulation is better.

The caveat is that memoization is generally more intuitive to implement especially when we don’t know the solution to subproblems, whereas tabulation requires us to know the solutions, or bottom, in advance, in order to build our way up.

In this tutorial, you learned the fundamentals of the two approaches to dynamic programming: memoization and tabulation. Stay tuned for the next articles in this series: Big O factorial time complexity and NP-complete problems.

Want to stay in the loop? I write a weekly newsletter about programming, problem solving and lifelong learning. Sign up for The Solution