Recently I have been asked to write a debounce function on a whiteboard. Even though I have used debounce quite often, this task made me feel confused. I had the necessary components in my mind but trouble putting them together quickly.

In this blog post, I will decompose my debounce implementation into components and try to explain them one-by-one. It can be useful for everyone who uses Javascript but can't call themselves advanced.

What is the debounce?

Here is an explanation of the debounce in simple words:

A debounce function is a rate limiter. It allows you to call a function as many times as you want knowing that it will only fire once after a given delay. You
use them when you’re waiting for some event that may happen repeatedly, but you only care about the final state.

And here is a simple visual demo:

Let's break it down

Here’s an example function we will debounce:

The debounce function must have two important pieces of functionality:

Let's start with writing a delay function that will provide a convenient wrapper for delaying any function:

For creating a working debounce, our current implementation of the delay function must maintain control over the timeout across callback calls:

Here we have added the timeoutId variable inside of the debounce function. On every invocation of the callLater that returns from debounce, the last timeout will be cleared and a new ID will be assigned to timeoutId from the setTimeout call.

For persisting the state of the timeout, we use the scope of the debounce function which will be accessible inside the return function via a closure. In my opinion, closures are one of the easiest and hardest concepts to understand in JS.

A visual scheme of our code: 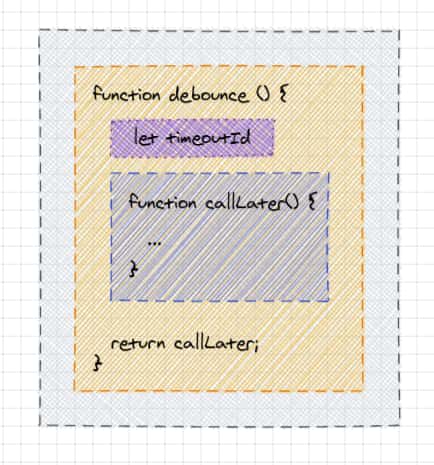 On the image above you can see timeoutId variable highlighted in purple and three scopes:

A closure is the combination of a function and its lexical environment (variables in outer scopes). Closures are created at the function creation time. In the case of the callLater function, it has the access to any variables located inside debounce (outer function's) and global scopes.

Let's take a closer look at how we use debounce:

The debounce is called only once and creates a single timeoutId variable inside and exposes a function that can see and modify that variable.

A visual scheme of how debounce implementation maps to the usage: 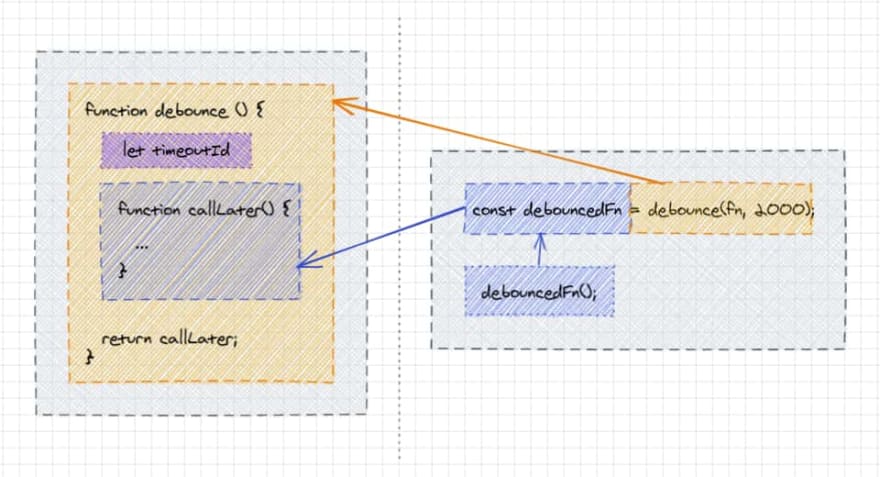 Also, it's important to understand that every debounce function invocation creates a new function instance with its own timeoutId. For example:

debouncedLogCurrentTime and debouncedLogSomething will spawn independent debounce function instances with their own timeoutId variables.

However, I would like to make a few improvements, explain what problem they solve, and how it works.

Providing original this and arguments

Due to the dynamic nature of how this works in JavaScript, it would be good to make sure that normal function invocation and debounced invocation will have the same this reference and arguments:

It has three changes:

The callLater function has no other usages except the one with return. It can be easily turned into an anonymous function that gets returned inline:

Note that we can't use an arrow anonymous function because it has neither access to the arguments object nor this bindings.

Functions are the core of JavaScript and are not as easy as they appear. This practical example with debounce makes use of many concepts in just 11 lines of code: higher-order function, callbacks, decorator, scope, closure, lexical environment, arguments, this binding, alternative invocation with apply, and types of functions. Identifying these components in code that you use every day can help to write better code.

I hated React JS, but nowadays I can’t live without it…

Upload Files to S3 Object Storage (or MinIo) with Express.js