This is a follow up to my last article on Hodloo. While last time I explained how to receive Hodloo alerts for USDT pairs, this time I'm showing you how to send the signals to 3Commas and trade hands-free - so you can get rich relaxing on the beach (see the cover image). Just joking, we all know it doesn't work that way, but it is a step in the direction.

Let's recap what we have when following the other article. We have a Python script running 24/7 on a VPS that parses messages from the official Hodloo API and sends USDT pairs to a Discord channel.

Now, instead of sending alerts to a Discord channel, we want to send them to a bot which does the buying/selling.

Why combining Hodloo with a bot? Why not trade manually?
I'm not doing this full-time. I have a day to day job. Also, the crypto market is running 24/7 and it happened too often in the past that a drop occured while I was asleep or not in front of my computer. By using a bot, I'm participating in the drop immidiatly.

In addition, I suck at trading. I'm FOMOing in all the time with too much size and then carry red bags for months. The bot keeps me away from the trading terminal.

Why 3Commas?
I find it intuitive and easy to work with. I'm using the bot mainly to get in a trade and then taking care of the rest manually. That means I often switch the bot's deal to a smart trade to get out when I want and not at a fixed percentage.

Why do you not use the built-in QFL algos in 3Commas
Because they suck - period. Hodloo bases are way better respected. And I need well-respected bases. I just can't take losses mentally and because of silly tax rules in my country.

Can I run this on my Windows/macOS machine?
Yes. Python is cross-platform. Remember that you need to let the machine running all the time. I don't want that hence I'm using a Linux VPS.

Why is this so complex and why can't I use a public service for this?
It's not available, unfortunately.

Head over to 3Commas and create two multi-pair bots. One for the 5% alerts and one for the 10% alerts. You choose the pairs you want to trade in the bot settings. While the script will send all Hodloo alerts to 3Commas, 3Commas will only create deals for the pairs you've selected in the bots. 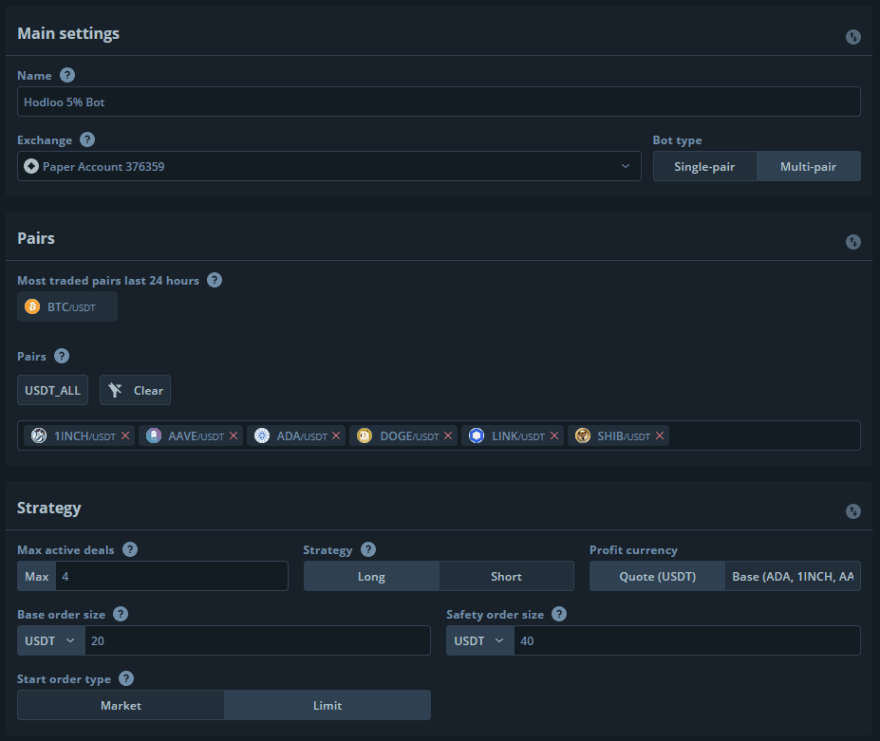 You can see that I've chosen six pairs for the bot but max deals is set to four. The bot will start a deal for the first Hodloo alert it receives to a maximum of four deals. Hence not all pairs you've configured will get a deal. First-come first-serve so to say.

Your safety order should be double the size of your base order.

Set the deal start condition to manually as the bot receives the signal through the Python script.

I wrote above that I like to get out of a trade manually. But, you have to set the take profit value to something and if it bounces to a 30% profit while I'm asleep - I'm okay with that ;-)

Now the juicy part - the buy layers. The above settings make sure that you get in with a small size and double-down when it goes south.

Save and start the bot. On the following page scroll down to the bottom and write down the bot ID. You need that later.

Panic sells are a new Hodloo signal which is not availalbe via the Telegram alerts, but only with the new API. It detects a higher than normal sell off which is often where it bounces. If you have access to the new API, the panic sells are the green arrows in the charts. 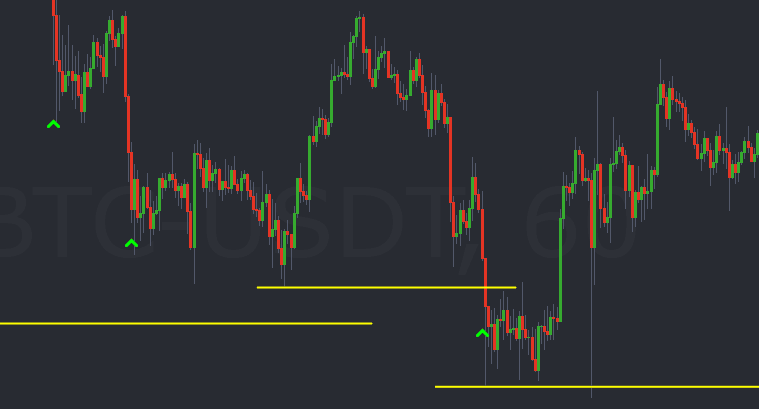 I'm currently testing these myself and do not have a best-practice bot setting for you, you have to find it out yourself. So, create a bot and write down the bot ID.

Saw the variables TC_EXCLUDE_LEVERAGED_TOKENS and TC_DENYLIST? By using these you don't need to click 1,000 times in 3Commas to build a blacklist. I prefer the term denylist btw, it's 2021 after all...

Run the script to see if everything is running as expected: python3 /opt/nobbi/hodloo/hodloo-to-3commas.py

Running the script like above will work but is not very handy because as soon as you close the terminal or the session, the script stops. So we need a way to run the script in the background and also after a server reboot. Check the next chapter on how to achieve this.

Running the Script in Background

We need a way to run the script in the background and also after a server reboot. There are multiple ways to achieve that and the easiest method for Ubuntu I found is using the tool supervisor.

Checking the status of supervisor:

Create an entry for the hodloo-to-3commas.py script. The following example uses vi.

Contents of the file (change the paths accordingly):

To check whether your python script is running use the following:

The new variable HODLOO_MIN_VOLUME allows to filter coins based on a certain amount of volume. If the volume is below the variable's threshold, the coin will be ignored. See the variable description for an example.

Until now the script required one config file named config.py. It now supports passing the name of the config file as a parameter, which allows running multiple instances of the script with different config files. Examples below.

Deta is a really good alternative to Heroku!!

Once suspended, nobbi will not be able to comment or publish posts until their suspension is removed.

Once unsuspended, nobbi will be able to comment and publish posts again.

Once unpublished, all posts by nobbi will become hidden and only accessible to themselves.

If nobbi is not suspended, they can still re-publish their posts from their dashboard.

Once unpublished, this post will become invisible to the public and only accessible to Nobbi's Crypto.

Thanks for keeping DEV Community 👩‍💻👨‍💻 safe. Here is what you can do to flag nobbi:

Unflagging nobbi will restore default visibility to their posts.