⚡ TL;DR: Arrays are fast and compact. Linked lists are not as compact, but adding or removing elements from them can be more efficient!

You probably already know how to use arrays and are familiar with methods like push, pop, etc. The purpose of this issue is to give you an understanding of arrays as a data structure and how they differ from lists.

**Why would you care?* For those who are preparing for a technical interview or would like to deepen your knowledge of computer science, this is the article for you.*

Arrays and lists are easy to mix up, so let’s try to make sense of what the differences are and how they work! ⚙️

You can think of memory as a bookshelf:

Now imagine you got the first four volumes of Game of Thrones 🐉:

This is your array. Now you wouldn’t want to store these volumes separately: if you find volume 1 you want to be able to find volume 2 easily. So you’ll find a place were you can put the four of them together. Luckily, our top shelf has room for exactly four volumes:

You found a spot for these, great. But, surprise! A friend comes over and gives you volume 5 📕

You run to your bookshelf, only to realize, you don’t have any room left next to volume 4 🙁

Reorganizing the bookshelf to make more room near volume 4 would work, but that seems like a lot of effort…

Instead, we’re going to move the first four volumes to a larger empty space. Now we can add the fifth volume!

Phew, that wasn’t easy! 🥵 These volumes are heavy, and you don’t want to go through the hassle of moving all of them every time you don’t have enough room for a new one.

We’ll need a little bit of setup before getting into this. We are going to assign a letter to each shelf, and a number to each column of book:

Now, each location on our bookshelf has a set of coordinates. For example, the third book of the top shelf is at position A2.

Instead of storing our volumes next to each other, we are going to put the first volume anywhere in the bookshelf: 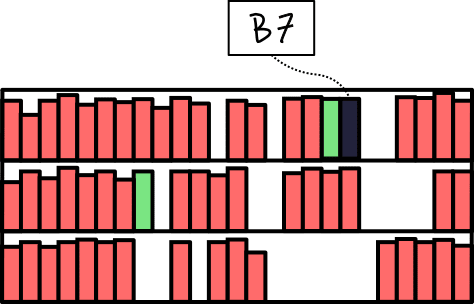 We can do this until we reach the fourth volume, where the note will be empty since we don’t have our fifth volume yet: 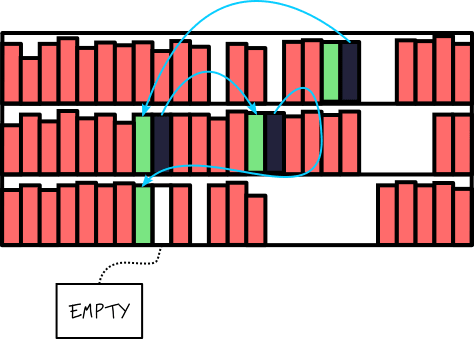 We just made a singly linked list: we have a single note next to each book that tells us where to find the next one.

Now you might be thinking, this is great, but why do I have to waste so much space storing those notes?

And you would be right: linked lists take up more space than arrays²! You give up some space, but you don’t have to worry about moving things around to add a volume to your series. As long as you have space for a book and a note, everything’s fine! Removing a volume in the middle is also a lot simpler: if you want to remove volume 2, just change the note after volume 1 with the coordinates of volume 3.

Key takeaway: trade-offs. When discussing the differences between arrays and lists, it is important to understand when and why to use one or the other — knowing this will make you stand out during any technical interview! ✨

[2]: Technically this might not always be true, because of the way programming languages handles memory allocation for arrays. You can read more about this here.

💡 Tip of the week

You can use git switch - to switch back to your previous branch:

🔗 What else is going on in tech?

PS: We would love to know how you felt about this article, did you find it helpful, and are there topics you’d love to see covered? Tag @nspiredTech on Twitter if there’s anything you want to share :-)

Byte Sized
With a combined 10+ years of technical experience we are sharing our knowledge and insight on Algorithms, interviewing tips, resume help and more! Reach out for help with your next interview!
The Inspector 🔎: A better way to test your code
#actionshackathon21 #javascript #opensource #productivity
Reduce Vs For-Loop
#javascript #reduce #programming #webdev
let and const vs var scoping
#javascript #tutorial #codenewbie

Once suspended, nspired will not be able to comment or publish posts until their suspension is removed.

Once unsuspended, nspired will be able to comment and publish posts again.

Once unpublished, all posts by nspired will become hidden and only accessible to themselves.

If nspired is not suspended, they can still re-publish their posts from their dashboard.

Once unpublished, this post will become invisible to the public and only accessible to Byte Sized.

Thanks for keeping DEV Community safe. Here is what you can do to flag nspired:

Unflagging nspired will restore default visibility to their posts.