Well, you have to store somewhere.

Traditionally, a programming runtime processes functionalities, and as a result, it sends SQL statements to RDBMS. Even tough, there are alternative options arising in recent market such as NoSQL, Data Grid, in-memory database etc., they are still part of the same architecture of; programming runtime and persistence unit has to be separated.

Nucleoid is a declarative programming runtime with gathering both of processing and storing into the same runtime, so, it doesn’t require external database.

Nucleoid doesn’t require code files to compile, instead it receives ES6 (JavaScript) statements as declarative statements like databases receive SQL statements. Each > is an entry into the system.

Variables in Declarative Programming | by Can Mingir | Nucleoid | Medium


First of, it runs the statement(s) in the state, which is the exact same as all JavaScript engines do, assigning a variable to value of 1.

Before closing the transaction, if the variable is part of other assignment, it runs dependents based on the graph, where all dependent information is held. 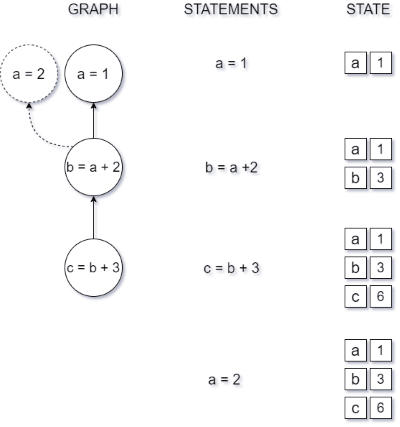 Since a is adjacent to b in the graph, the runtime reruns b = a + 2 , and updates b to 4 in the state along with a is being 2 in the state, and the same flow for c. If there is no logical conflict like circular dependency, it stores each statement as received on the disk as finalizing the transaction.

This algorithm parts from traditional way of storing and caching because databases usually cache data as it stores in the similar structure, but in this case, memory holds value of the variable, and disk stores statements as cumulative representation. This algorithm is also commonly used in event sourcing/CQRS, as event being received, the algorithm stores the event, and updates its result.

Since the state is already in memory, processing becomes faster because traditional programming runtime requires retrieving data regardless from database or cache server. Also, as mentioned, Nucleoid appends statements as received, and appending data on the file is the fastest disk operation. In addition, since there is no network communication required, it cuts that from the equation. For a trade off, it requires just-in-time compiling and computing on dependency graph as well as increases space complexity of storage on the hard drive.

Hello World with Nucleoid. Nucleoid is a runtime environment that… | by Can Mingir | Nucleoid | Medium

Relationships of objects are defined similar to database’s relationships, but it requires to define in declarative syntax.

One-to-one’s defined as referring object’s property to another object instance.

Bidirectional relationships requires additional declaration in order to keep both side synced, so not recommended unless absolutely required, associative entity may be used as alternative.

Still all the declarations are applicable to the property:

One-to-Many is defined in two ways:

Property as in Many’s side

It is a property created, which refers to other instance:

Many-to-Many is relatively straightforward as only possible with associative entity without carrying any additional constraint.

Queries is done with functional programming.

The runtime stores each instance into its class list like driver1 = new Driver() will be part of Drivers. 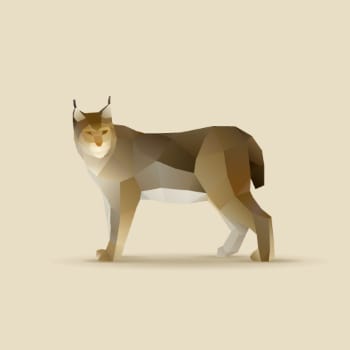 Thanks to declarative programming, we have a brand-new approach to data and logic. As we are still discovering what we can do with this powerful programming model, please join us with any types of contribution!

Once suspended, nucleoid will not be able to comment or publish posts until their suspension is removed.

Once unsuspended, nucleoid will be able to comment and publish posts again.

Once unpublished, all posts by nucleoid will become hidden and only accessible to themselves.

If nucleoid is not suspended, they can still re-publish their posts from their dashboard.

Once unpublished, this post will become invisible to the public and only accessible to Can Mingir.

Thanks for keeping DEV Community 👩‍💻👨‍💻 safe. Here is what you can do to flag nucleoid:

Unflagging nucleoid will restore default visibility to their posts.