Last month i started taking a course on python and i stumbled on a tutorial on object oriented programming from the python perspective, and through out this week and coming weeks i would be sharing what i have been able to learn.

The above code snippet shows how to create a class in python, the pass keyword under tells python to neglect the class, without this keyword, python would see the class as an empty one and return an error. A class is a blue print for creating instances and each unique employee that we create would be an instance of that class.

Imagine a situation we have 1000 employees to create, trying to set the variables each time we want to create an employee would mean having a-lot of code and errors. But python allows you to be able to create instances automatically and this we could do using its (init) method.

the init method after creation receives an instance automatically called (self), and we also pass in other attributes of the Employee class like name and pay. Next stop we would be looking at setting the instance.

with that done, when we create our employee, the instance would be passed in automatically, all we would bother ourselves with would be to provide the employee attributes.

on running this script (emp_1) would be passed into the (init) method as self.
Now suppose we want to print each users fullname, we could actually use the format function in python to concatenate strings to get the fullname, but this would require doing this every time we want to print an employees fullname, but to better enjoy the advantage of code re-use, we would be creating a method to help us generate each employees fullname.

That is it for class and instance of a class creation. Below is the full source code for the piece. 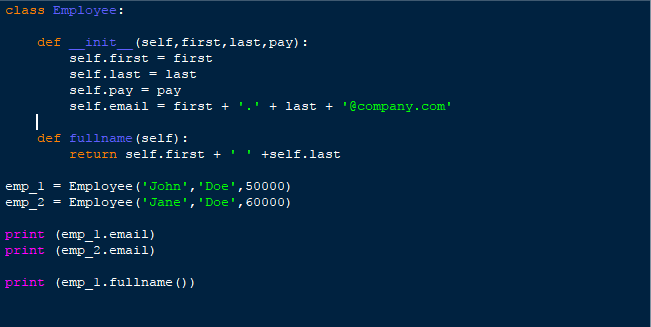 (Note)
while trying to print employees fullname, you could either do this--> (emp_1.fullname()) or you could try (Employee.fullname(emp_1)), they both mean the-same thing, in-fact the later is what happens in the background when you run the program.

Once suspended, ogwurujohnson will not be able to comment or publish posts until their suspension is removed.

Once unsuspended, ogwurujohnson will be able to comment and publish posts again.

Once unpublished, all posts by ogwurujohnson will become hidden and only accessible to themselves.

If ogwurujohnson is not suspended, they can still re-publish their posts from their dashboard.

Once unpublished, this post will become invisible to the public and only accessible to Johnson Ogwuru.

Thanks for keeping DEV Community 👩‍💻👨‍💻 safe. Here is what you can do to flag ogwurujohnson:

Unflagging ogwurujohnson will restore default visibility to their posts.