I was challenged to find a way to step through some code. Usually I’d just fire up my IDE and start debugging, but this case was a bit more complicated than that. You see, this code is Lua code, running inside a custom version of NGINX called Openresty, running inside a Docker container as part of a Docker Compose app. Oh, and I needed to step through it using IntelliJ IDEA.

Can’t be too hard, right?

How do other people do it?

I sat down and read a lot of material online and most of it boiled down to one of two things:

Neither one of those things were what I wanted to do, which got me thinking that, in order of likeliest to least:

After a few days of work, I found the way to do it and the following is an explanation of how you could do it yourself.

If you don’t really care about the journey and why these things actually work, you can jump over to Summing it all up and see the end result there.

Fire up IntelliJ IDEA and install the EmmyLua plugin for IntellIJ. Note that this is not the Lua plugin, which I couldn’t get to work in the latest version of the IDE.

To start debugging, you’ll have to create a new Debug configuration. Go to Run → Edit Configurations... and add a new Emmy Debugger config.

Set Connection to Tcp ( IDE connect debugger ), and Keep Host and Port as localhost and 9966.

The dialog is kind enough to generate a snippet of code you can copy and paste to your Lua code to bootstrap the debugger in its context. 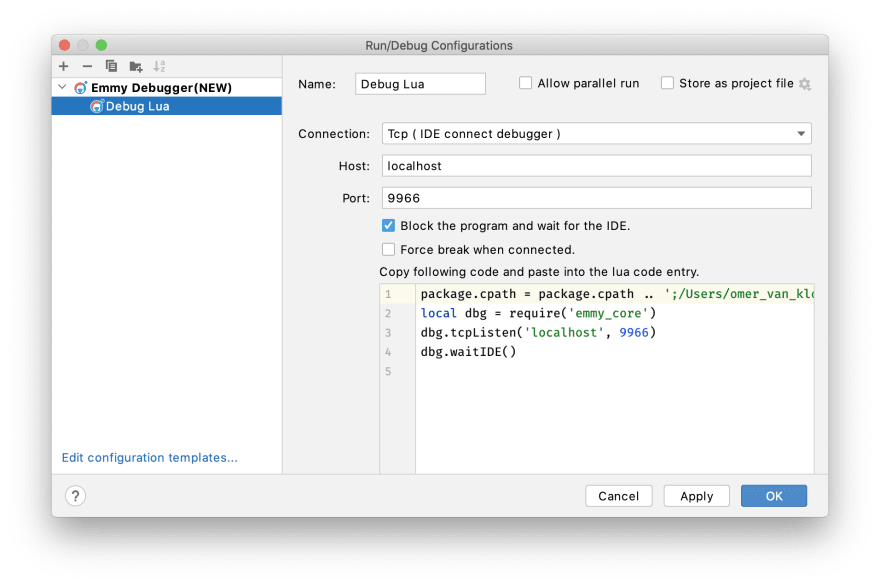 What IDE connect debugger means is that the code will start listening on port 9966 for incoming connections, then block until the IDE attaches to it when we run this Debug configuration.

Here’s the code I copied from that textbox verbatim:

We’ll have to add this code to the file we’re debugging so that it can wait for the IDE to attach, after which we’ll theoretically be able to step through it, right?

There are a few red flags here. Let’s break them down one by one:

While the port contention (#3) can be solved with either closing the port quickly (using dbg.stop()) or using a random port, the first two merit some more detail.

We’ll need a local binary inside the container to load, and it has to be the right one.

While Emmy releases Linux SO files for Emmy Core as part of their builds, they’re not necessarily compatible with whatever flavor of Linux your container will have. We’ll have to build it from source as part of building the image:

The above gets the latest released version of the source code (1.0.16 is the latest at the time this is written) and builds it according to the script in the repo’s .travis.yml file (lines 7-8). It then copies the SO file to the easily reachable /usr/local/emmy (lines 9-10) before removing the downloads (line 13).

Like me, you might not be able to build it because you have an older version of CMake than is required. In that case, add the correct one before compiling the Emmy Debugger SO:

Here we download the latest version of CMake 3 which is required to build Emmy Core (line 1), then build it from source (lines 5-7), remove the downloads (line 9) and update Ubuntu to use it instead of the default CMake (line 10).

Back to the code we used to bootstrap the debugger:

We told our code to bind to localhost on port 9966, but that doesn’t help us since we’re inside a Docker container. Let’s expose that port to the host computer so that it’s reachable.

In your docker-compose.yaml, add the following lines 3-4:

This exposes 9966 as a port local to the host machine. When the IDE opens a connection to it, that connection is proxied into the container.

After doing all of that, let’s give it a try! Let’s place a breakpoint after the dbg.waitIDE() line, start our Docker Compose app, then call the endpoint that includes the code to debug and, as it waits for us to connect, run the Debug Configuration.

That doesn’t work, though. The code waits for the debugger, the debugger successfully connects and then disconnects. Our breakpoint isn’t even hit!

The issue here is that when we place a breakpoint in the IDE in the file /Users/omer_van_kloeten/my_project/src/lua/something.lua, the debugger will never stop there, because that path doesn’t exist in the container. Instead, this file will be somewhere like /etc/nginx/lua/something.lua. How can we make that translation?

I scoured the documentation, but found no API that could do that. Begrudgingly, I started trudging through the debugger’s source code and eventually found a public API hook, with only a single line example. Was this the right API? I read through the sources and tried it and it just worked!

Here it is - this code should be placed before loading the debugger:

The fixPath function gets a file’s path and ‘fixes’ it to look like the paths the IDE expects.

Looks like this will solve it. Let’s try again to place a breakpoint after the dbg.waitIDE() line, start our Docker Compose app, then call the endpoint that includes the code to debug and, as it waits for us to connect, run the Debug Configuration.

Works on my machine

This was exciting, but committing this kind of code would get me tarred and feathered. Let’s make sure this works on everyone’s machine. But how can we know, from inside a running container, where the host machine’s source code is located? Let’s use an environment variable.

Let’s make a couple changes to the code above:

This means we’ll need to get the value /Users/omer_van_kloeten/my_project/src into the variable.

We’ve added the environment variable in line 4, but didn’t give it a value. That means it will pick up the value from the host environment when it’s started.

Before we docker compose up our app, we’ll need to first export the environment variable:

Stepping through the code will now work on all of our colleagues’ computers!

Summing it all up

A word of warning

This guide covers only the first steps towards making robust debuggable code. You do not want to ship your code with debugger binaries listening on a port for connections.

This guide is far from comprehensive and doesn’t allude to being one-size-fits-all. I’d love to hear how you fixed issues with it in the comments. Come share your personal progress!

Here’s all of the changes we made to our code in easily copy-paste-able gist form:

This way of debugging means that the code waits for the debugger to connect to it, when it uses tcpListen. However, this is not that great because it waits for user interaction (starting the Debug Configuration). If we used tcpConnect, we would be able to start the debugger and have the process connect directly to it when it needs to, without user interaction. Unfortunately, I was unable to make that work within a reasonable timeframe when listening on 0.0.0.0 and attempting to connect to host.docker.internal from inside the Docker container. Perhaps you will.

A lot of the above included frequently changing Lua code and rebuilding the container, causing the feedback loop to be frustratingly long. If we can edit the files inside the container, that would make things much easier, right?

To do that, let’s attach our sources as a volume to the container in docker-compose.yaml:

In line 3 we’re effectively replacing the files that exist inside the container with a live link to our local ones.

However, Openresty has a Lua code cache which will cache the code once it’s been run. Thankfully, we can turn that off in our nginx.conf:

Unfortunately, this neat trick breaks the reproducibility of Docker images, so these patches to docker-compose.yaml and nginx.conf should never reach your CI server.

Note that you may also break your code if you turn off the Lua cache, due to its side effects.

Please remember that this guide only outlines bootstrapping the ability to step inside the code, and therefore should probably not be used as-is. It was a fun challenge to take up and I sincerely hope that this guide is some day useful to someone other than myself.

Omer van Kloeten is a Principal Software Engineer at Forter.

Omer van Kloeten
If you could start a company, what would it be?
#discuss #career #entrepreneur
Reasons NOT to...
#devrel #leadership #discuss
GitHub verdinho: Ter ou não ter?
#braziliandevs #github #opensource #discuss

Once suspended, omervk will not be able to comment or publish posts until their suspension is removed.

Once unsuspended, omervk will be able to comment and publish posts again.

Once unpublished, all posts by omervk will become hidden and only accessible to themselves.

If omervk is not suspended, they can still re-publish their posts from their dashboard.

Once unpublished, this post will become invisible to the public and only accessible to Omer van Kloeten.

Thanks for keeping DEV Community 👩‍💻👨‍💻 safe. Here is what you can do to flag omervk:

Unflagging omervk will restore default visibility to their posts.