I’ve always been interested in the animal icons that users are assigned when accessing a Google document anonymously, but only recently did I seriously start wondering:

How many are there?

Are they available via some sort of API or image server?

So, I began searching the internet. See the end for some related pages I found and stuff I used for reference.

I figured since these animals have been around for years and since Google is one of the biggest names on the internet, that it should be pretty easy to answer these questions...

But no! Nobody seems to know for sure how many there are. There are many lists of varying lengths out there, and it’s difficult to create a definitive one, as it seems animals have been both deleted and created since their introduction.

After many hours of searching, I still not found anything published by Google itself that lists the anonymous animals, though admittedly I haven’t asked anyone that works there directly.

However, I did look into the source for the anonymous icon image that appears in a doc webpage, and found this:

where lg (large) is the size of the image, though I’ve not checked whether other image sizes are available. So, all possible anonymous animal images are supposedly located at ssl.gstatic.com/docs/common/profile/, though I don’t know of an easy way to list all valid image files under that path.

Well – I thought – maybe I could just guess and check?

So, I compiled as complete a list of animal names as I could find and attempted to check if each existed, with code like so:

The results were promising, but comparing with other lists on the internet I saw that there were some I was missing, because some anonymous animals are actually fictional creatures (ex. unicorn, dragon, nyan cat, jackalope), have special names (ex. dumbo octopus, slow loris), or animals at all (ex. pumpkin)! In these cases, I just grabbed names that other people had shared previously and added them to my list.

Now, if you’d like to see what may be the most complete list of Google Anonymous Animals on the internet, check mine out at anonymousanimals.herokuapp.com! 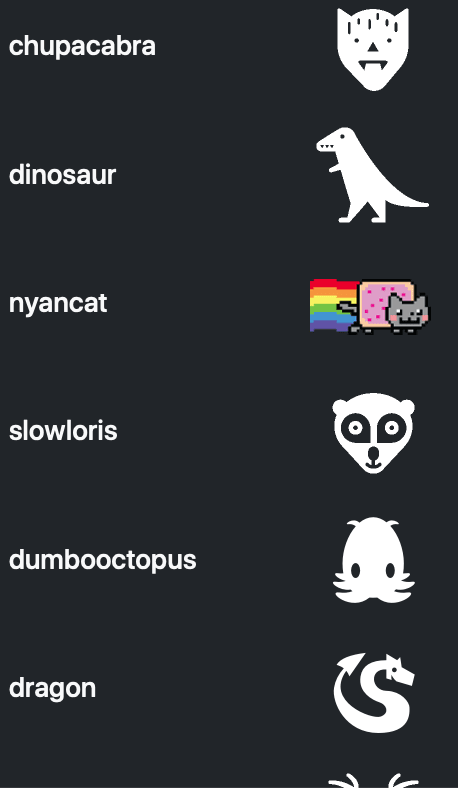 So far, any time an animal has a space in its name (ex. nyan cat, slow loris), the corresponding filename has no space (ex. nyancat_lg.png, slowloris_lg.png).

See zoo.json for my list of animal name candidates that are used to discover anonymous animal images on Google’s server.

Source code for my anonymous animals page is available at github.com/ogallagher/google_drive_anonymous_animals.

If you are aware of other anonymous animals that don’t appear in my list, let me know and I’ll add them!

The Chrome Dev Tool you are missing : FEAT Recorder

Once suspended, owengall will not be able to comment or publish posts until their suspension is removed.

Once unsuspended, owengall will be able to comment and publish posts again.

Once unpublished, all posts by owengall will become hidden and only accessible to themselves.

If owengall is not suspended, they can still re-publish their posts from their dashboard.

Once unpublished, this post will become invisible to the public and only accessible to Owen Gallagher.

Thanks for keeping DEV Community safe. Here is what you can do to flag owengall:

Unflagging owengall will restore default visibility to their posts.