There have been two things that have appeared in newer versions of JavaScript that I haven't understood: Symbols and Iterators.

When it comes to code I have to learn by doing, no amount of reading Mozilla Developer Network was going to help me understand Symbols.

So I finally decided to stop reading articles, crack open a JavaScript console, snap in to a Slim Jim, and figure out what Symbols are all about.

And now that I think I understand some basics, I want to share them with you.

JavaScript Symbols are a new primitive

If you read the entry on the Mozilla Developer Network it'll tell you right there at the beginning:

Symbol is a primitive data type

That's a big deal. The Symbol is right up there with String, Boolean, Number, undefined, and nobody's favorite, null.

Primitives are a bit like the protons and electrons; you mix and match them to make atoms (objects). Put enough of them together and you can make a Death Star (it's called NPM).

This is something that's easy to read on (digital) paper, but maybe hard to accept in practice: When you create a Symbol it is unique. Forever and for-always.

Not only is every symbol ever created unique, you can't even compare two symbols with the same "value".

Those are all fun type coercion games that we hope never come up in job interviews.

So Symbols don't give into our concatenation shenanigans.

So what are Symbols actually good for?

What good is an absolutely unique primitive that doesn't give into JavaScript's Weird Coercion Tricks®?

Let's suppose some sort of library that we're bringing into our codebase. We're making some dinosaurs, but maybe we don't have that bit about getting dinos to reproduce.

This seems fine, except ... it's easy to create a scenario where everyone dies:

Sometimes, when we add a feature on to an object, we want it just for that object. We don't want others to see what we've been doing and to use it themselves.

What if we created our own private way to help that megaTRex reproduce? One that no one else could know about?

Let's go back to our megaTRex and try again. But this time, we'll use a Symbol as the key for our object (this is called a symbol-keyed property):

In the Firefox console, you'll see something like this if you inspect the object:

You can see that it's there, but you're not going to find it in any of your typical approaches you might think of for finding properties on an object or its prototype.

None of these will reveal a property-keyed Symbol:

You'll have to use Object.getOwnPropertySymbols if you want to find the symbols living on an object. So it's not like Symbol-keyed property is invisible; it's just chilling on an island you weren't thinking of looking on.

But, looking is one thing. How do you access it?

It takes a symbol to know a symbol

You might be able to inspect an object and see that a symbol is a key on it. But you don't have any way to access it — unless you have the symbol you used to create it.

What this means is that we get a good fair amount of privacy and protection for our objects. The Symbol is a way to extend an object, maybe even an object you don't really "own" -- and do it in a safe way where you don't open up risks of abuse elsewhere in your runtime.

The only way this megaTRex is going to make a baby T-rex is if you have that exact Symbol:

This is especially practical in cases where we are importing from a library and exporting code to be used elsewhere:

We've safely extended our library and exported a product after that extension — without exporting the ability to access that function.

Going back to the fact that a Symbol is absolutely unique. This turns out to be handy for another reason: it prevents accidental overwrites.

Let's step away from uncited Michael Crichton fan-fiction for a minute and talk through a slightly more practical example: extending the console.

Let's suppose we're dealing with a particularly fickle library, and we need to do a lot of logging.

Maybe we want to have a nice formatted console.log, because we're developers and of course we'd want this.

Cool. Because we've used a Symbol for extending the console, we're safe from any browser ever adding console.log.pretty in the near or distant future.

This is a great way to extend globals in the browser!

As long as we've got access to that pretty variable, we can write console.log[pretty]('Hey there') and see all the delightful console messages we want.

Just, uh, remember that you need that exact symbol. Which means...

You may have noticed that I used let in my example above.
This is bad. Don't do that.

Now I have no easy way to get back my old "pretty" symbol.

I should've used const so my variable couldn't be reassigned. That was dumb.

How can I ever outshine other developers on my team without this precious symbol? Will I ever be able to get my long lost symbol back, so that I can make my logs pretty again?

Of course. I need to use getOwnPropertySymbols and quit being melodramatic:

Wen you create a Symbol, it doesn't need a 'descriptor'. You can make plain ol' ordinary undescriptive Symbols:

Much like cloning dinosaurs, this is probably a bad idea.

If you're using Symbol-keyed properties, and you need to use getOwnPropertySymbols, that descriptor is going to be the key to figuring out which is the prettiest log of them all:

I should add, by the way, that while you could use the same descriptor for every symbol-keyed property, that doesn't mean you should:

I think this is a Good Thing™.

The most common way to deep-clone objects in JavaScript is with JSON.parse(JSON.stringify()).

A Symbol-keyed property is a simple and terse way to put a property on an object that you don't want to be cloned.

Object.defineProperty might make sense when we need to define a lot of things about a property. But if we want an easy way to make sure the property and its value aren't cloned, Symbol seems the way to go.

Turns out, there's a slew of "built-in" symbols that exist. I won't list them all here, but there's a few that catch my eye as particularly interesting:

Create a String that iterates by word

for of is kinda awesome, but it only works on things that are iterable (more on what that means in another post.

Let's use Symbol.iterator and make a string iterable:

Ignore the * and the yield for right now. Those are things for iterators. Just dial in on the fact that we used a global Symbol key (Symbol.iterator) and we used it to make something that wasn't iterable ... iterable.

Look at what we can do with this fancy WordString now: 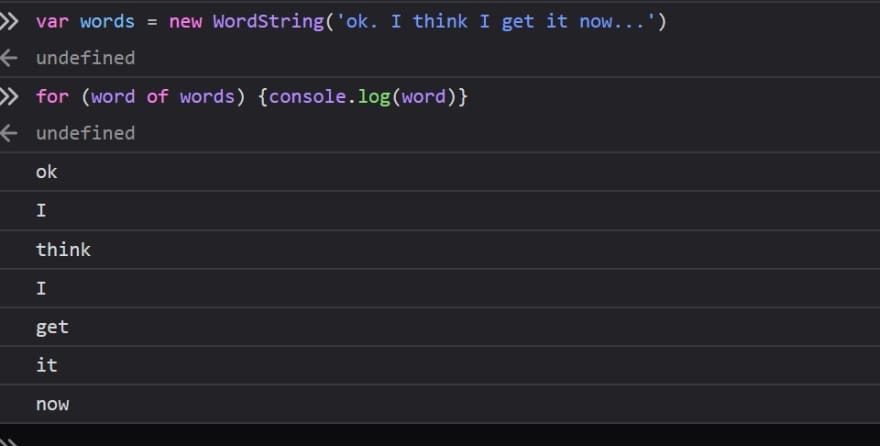 If you read my previous post on arrays you might recall that there's an implicit and explicit undefined. Maybe you're disappointed that arrays are liars sometimes.

Let's use Symbol.species to tell us that this is still an array. And then we'll throw a generator function on that array and define what for of will actually return:

Again, ignore the * and the yield. That's for another time.

The greater point is that Symbol has some built-in "keys" that we can add to an object to extend functionality.

Dev.to says this is a 9-minute read. That's like 2 cigarette breaks or one visit to the bathroom after a tryst with a holiday cheese plate.

I don't want to keep you much longer or someone will be looking for you... and, "I was reading an article about Frank's Jurassic Park-inspired JavaScript Symbol fan fiction," is not how you want to explain yourself. You're a professional.

Thanks to Isabela Moreira and Alex Klock for providing technical review of this.

Once suspended, paceaux will not be able to comment or publish posts until their suspension is removed.

Once unsuspended, paceaux will be able to comment and publish posts again.

Once unpublished, all posts by paceaux will become hidden and only accessible to themselves.

If paceaux is not suspended, they can still re-publish their posts from their dashboard.

Once unpublished, this post will become invisible to the public and only accessible to Paceaux.

Thanks for keeping DEV Community 👩‍💻👨‍💻 safe. Here is what you can do to flag paceaux:

Unflagging paceaux will restore default visibility to their posts.