Not in a mood for reading? Watch the video!

If you are planning to build a web or mobile app, and you are facing the problem of choosing between React.js vs Angular, in this article I will guide you through the differences, similarities, and some of the best use cases for both, to help you make a final decision.

However, some people say you cannot really compare React to Angular, as Angular is a full-stack MVC framework, while React is just a view library.

However, I think you can and even should compare them, as they are both ready to deliver great apps, and both are perfect technologies to support the most demanding digital business objectives.

We will also go over the benefits of React.js and Angular, a few pros and cons, and we will also make a classic head-to-head comparison.

React.js is an open-source JavaScript library for building performant and visually attractive user interfaces. It combines development simplicity (thanks to small pieces of code called “components”) and a strong focus on user experience. React is the View layer of the MVC model, which gives you almost total freedom of choosing Model and Controller libraries.

Pros and cons of React.js

Now, let’s take a look at some advantages of React from a business perspective and its cons.

If you want to find out more, we prepared a detailed summary of React JS pros and cons, which you can read here.

Facebook isn’t the only company taking advantage of React and its possibilities. There are a few more well-known brands, such as:

However, it doesn’t mean that React is the right choice only for big brands – it’s on the contrary. You can use as little (or as much) of React as you need at the moment. For example, adding React to your website is literally a matter of one minute.

Angular is an open-source framework created by Google for building web applications. While React is based on JavaScript, Angular is based on TypeScript. And unlike React, Angular is a full-fledged MVC framework so once you learn it well, you won’t need other solutions.

Angular is a result of rewriting AngularJS, which was the first version of Angular.

Pros and cons of Angular

You already have learned about React.js pros and cons, so it’s time to find out why it’s a great idea to choose Angular (or not).

As I've mentioned at the beginning, some people say it's not really a good way to compare React to Angular, as they are both slightly different things.

But does it really matter if both are able to build great apps?

It seems like Angular is a better option, as it's a full stack MVC framework that doesn't require any additional libraries to be complete.

On the other hand, React indeed requires other libraries, but it really depends on your project objectives if that's a benefit or disadvantage. Being an independent view library, React gives you almost unlimited possibilities if it comes to building user experience, and what's more, you can also be quite flexible to choose with which libraries you want to work.

React is using a virtual DOM, which means it doesn’t have to update all the HTML. He is just looking for the differences between the current and the old HTML and updating it accordingly.

Angular is using real DOM, which means it is going through the entire structure of HTML to find what there is to be changed and “mutate” the tree to apply changes.

According to official React’s website, “Concurrent Mode is a set of new features that help React apps stay responsive and adjust to the user’s device capabilities and network speed”.

However, they are still experimental and not a part of stable React release. Developers can try them in an experimental build.

A while ago (with v16 version) React changed its engine elevating the speed from “just fast” to “blazingly fast”.

More than that, React Fiber enables the priority-based update system, so you can fine-tune your renderings to make sure the most critical updates are done first. Also, you can pause and start your work at will.

As some kind of response to React Fiber, Ivy is a complete rewrite of the compiler so Angular developers can:

One way data binding, on the other hand, renders the change in the interface model only after the model state is updated first. And whenever you change the UI element, the model state stays the same with no changes.

So, in the case of data binding, it seems like a draw because one-way data binding is preferred.

Choosing React allows you to use React Native to build truly native and cross-platform mobile applications. While RN uses a bit different syntax than React does, it’s relatively easy to learn it if you are already familiar with React. With React Native, you can create components and bind them in Objective-C, Java or Swift code.

Angular, on the other hand, uses NativeScript, which is a framework for building native iOS and Android apps with the use of JavaScript and Angular.

When it comes to the performance of both applications, if they are well-written, the difference will be hard to notice.

Since React is a lightweight UI library, it’s much easier to learn than Angular. A list of things you have to absorb is quite short: JSX, a router library and state management library. Also, it’s necessary to have knowledge of writing components, managing internal state and using props.

Angular is not a library – it’s a fully-fledged MVC framework. Because of that, a list of things to learn is much longer than in the case of React.js:

And that’s just a start.

The popularity of any particular programming language or web technology can be a great source of information and insights. Looking at these stats will help you with gathering answers to questions like:

To determine the popularity of React and Angular, I checked sites like Github, Google Trends, Stack Overflow Trends, and Annual Survey. 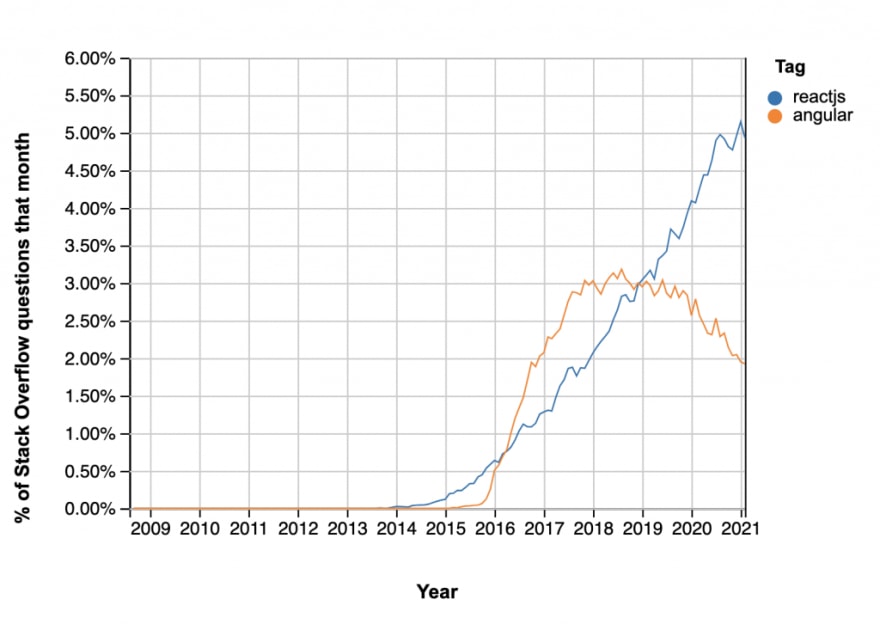 Most Loved Web Frameworks according to Stack Overflow 2020 Survey 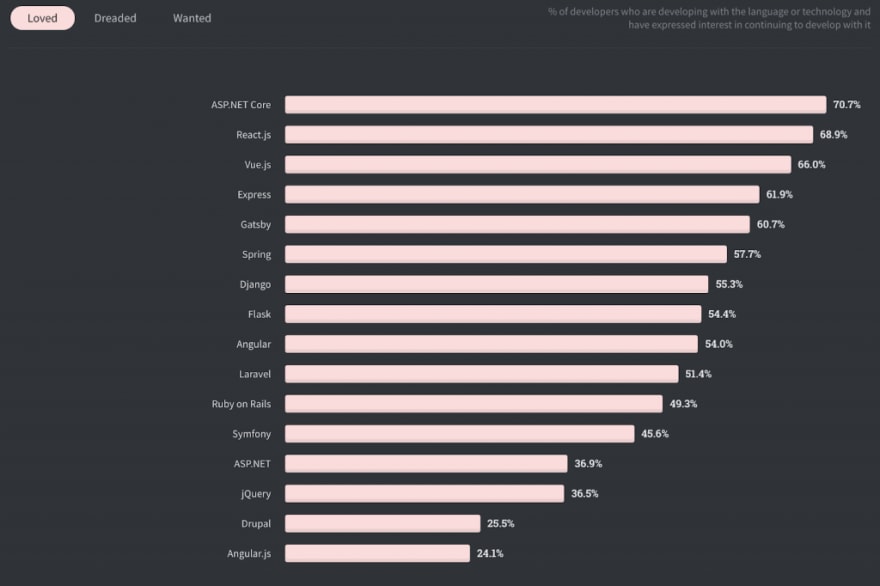 Since 2019, React.js lost its first place to ASP.NET Core, but it’s still at the top. Angular, on the other hand, stayed in the middle. 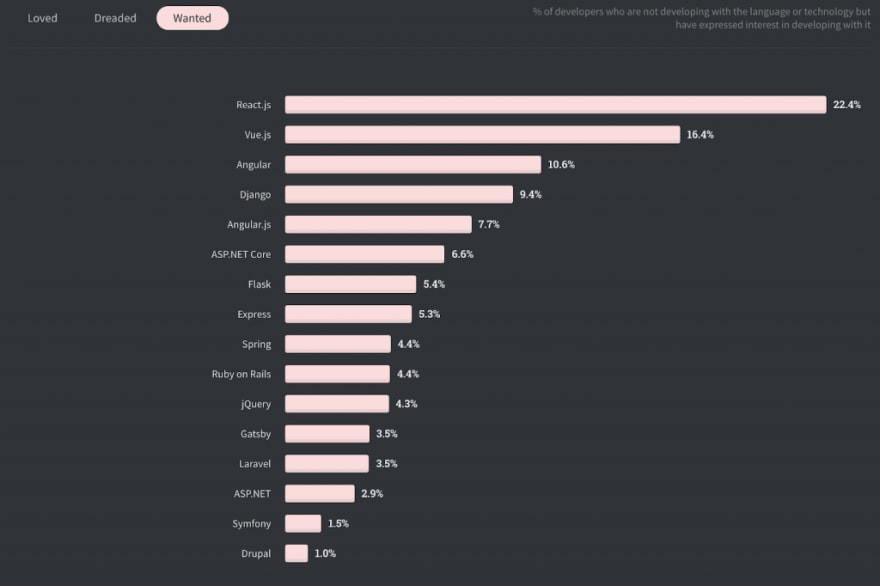 React vs Angular on GitHub 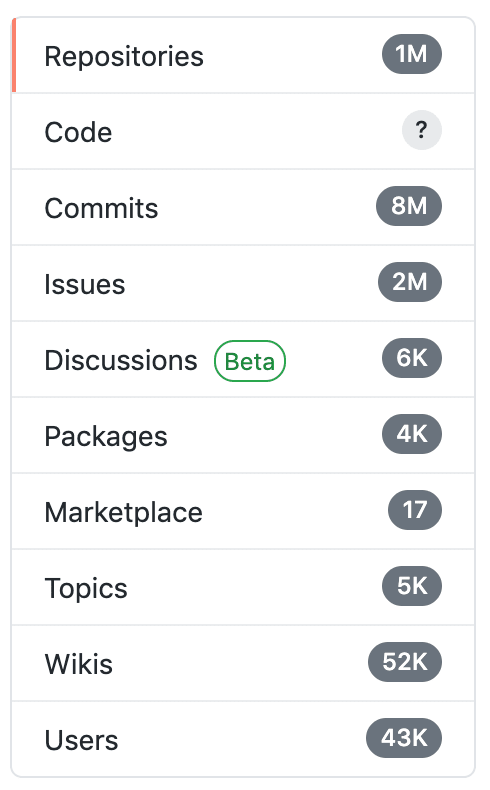 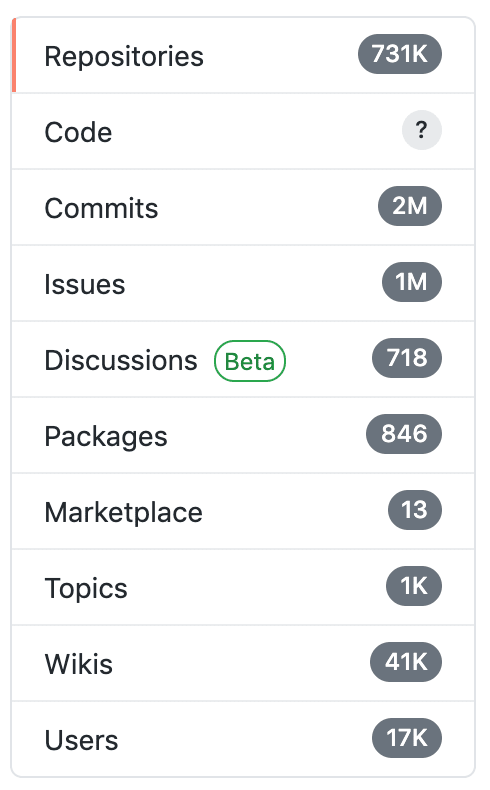 Google Trends: Comparison between React vs Angular in the last 12 months and 5 years 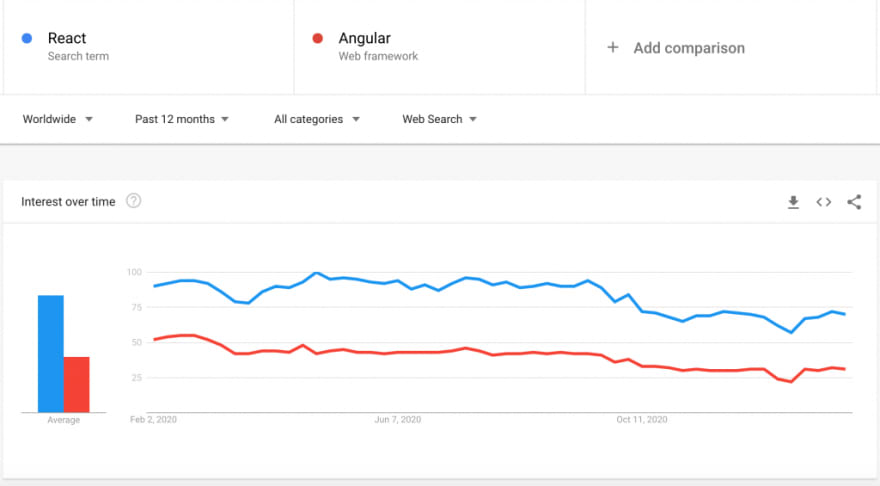 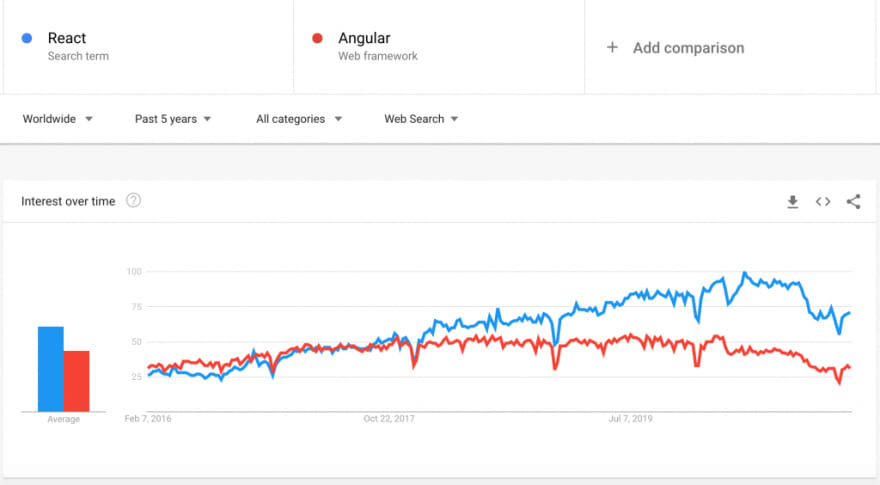 Angular is using templates based on an extended version of HTML with Angular directives. You will also have to learn a specific syntax.

With React, on the other hand, all you need is JavaScript knowledge. A JSX is a genius component made from markup and JavaScript logic in the same file. Thanks to the use of XML-like language, you can write your markup in your JavaScript code, so everything is in one place, and the code completion works better.

React uses Jest (sometimes together with Enzyme – JavaScript testing utility). Jest has a powerful mocking library, doesn’t require any configuration and is included in every React project. However, nowadays using react-testing-library is more common and practised.

Angular uses Jasmine, which outcome is considered by many as one of the hardest to read and too complicated.

Many times, our clients are also asking quite interesting questions, that are truly hard to answer.

Some of them you can find below:

React vs Angular: Time to market

Is it faster to build an app with React or Angular?

The answer is hard for two reasons.

One - it really depends on too many factors. Like the skill of a developer, the competences of the entire team, the level of communication, team work flow, etc.

Is it going to be easier to scale an app in React or Angular?

And again, I don't have a definite answer.

Both Angular and React have their pros and cons if it comes to scalability, but taken into account that React is better off with bigger apps, if you plan to make your app really big in the future, maybe it's better to think about the React from the beginning.

React vs Angular: How easy it is to start?

Is it going to be easier to start a project with React or Angular?

And again, no clear answer here.

If you take Angular - it has a lot of great ready-to-use tools and functionalities out of the box, which makes it extremely easy to start.

However, although React doesn't have that many ready-to-use options, it has also great, clear, and rich documentation that will guide you through and help you build the project from the scratch. It also has a great community ready to help anytime.

In general, there is no definite answer to which one is better React or Angular, as they both are able to build great apps.

Yet we can see slightly more advantages in using React, and we choose it, as we have to face projects with performance challenges more often. On top of that, we are appreciating the possibility to have total frontend freedom a lot.