I'm building a social media network and collaboration tool based on mind maps, documenting my work in this series of blog posts. Follow me if you're interested in what I've learned along the way about building web apps with React, Tailwind CSS, Firebase, Apollo/GraphQL, three.js and TypeScript.

In the previous part I, part II and part III, I've found out how to render React components on sprites in three.js and connect them with lines to make up a mind map that's nested two levels deep.

There's Got to Be a Better Way

I've been thinking about the solution I have this far. It is renders mind maps with a depth of two levels, and already it becomes clear that drawing a graph like this is not easy (it is mathematically speaking a graph).

I ultimately want my mind map to be potentially hundreds of levels deep and have thousands of nodes. To calculate the position of the nodes so that the don't overlap is a nontrivial problem.

A Facebook friend pointed me to the wikipedia article about graph drawing (thanks, Stefan!). It discusses different layout methods. This one seems to be the most appropriate for drawing a mind map:

In force-based layout systems, the graph drawing software modifies an initial vertex placement by continuously moving the vertices according to a system of forces based on physical metaphors related to systems of springs or molecular mechanics. Typically, these systems combine attractive forces between adjacent vertices with repulsive forces between all pairs of vertices, in order to seek a layout in which edge lengths are small while vertices are well-separated.

This is what it looks like (with tons and tons of nodes): 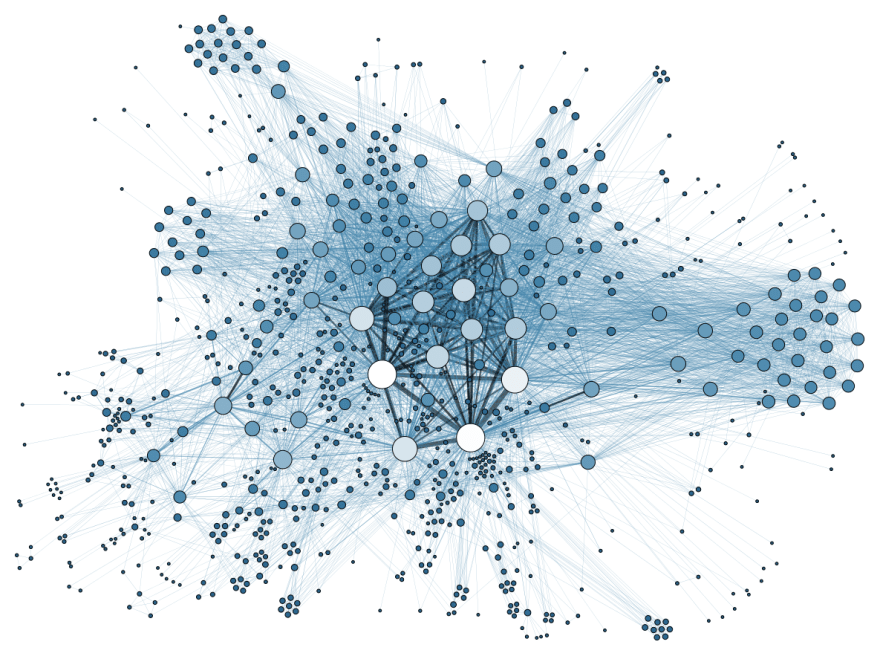 Note quite what I'm aiming at, but I think I can make this work for me.

Dev.to user crimsonmed pointed me to an implementation of force-directed graphs for three.js: three-forcegraph – thanks Médéric!

To use three-forcegraph, I have to reformat the JSON file with my mind map data:

While previously, the nodes were linked through a parent property, now the nodes and the links between them are defined as separate arrays.

My renderMindMap for now simply throws the data in a ThreeForceGraph object and renders it:

Note the line graph.numDimensions(2) – it's important, because by default, the graph will be three-dimensional, which is not suitable for a mind map and would lead to nodes that appear to overlap.

I need to render the graph in an animation loop, because that's how the library works, it starts out drawing all the nodes in the same spot, then the force of each node drives them apart from each other.

The result looks promising already – none of the nodes are overlapping:

Now, instead of those bubbles, I want the force directed graph to display the MindMapNode React components I had created in my earlier attempts (see part I of this series).

It took quite a bit of fiddling and trial and error, this is what I came up with:

So here you have it, my mind map rendered as a force directed graph:

I think next time, I'll see if I can add interactivity: it would be cool if I could add new mind map nodes and remove existing ones.

Once suspended, pahund will not be able to comment or publish posts until their suspension is removed.

Once unsuspended, pahund will be able to comment and publish posts again.

Once unpublished, all posts by pahund will become hidden and only accessible to themselves.

If pahund is not suspended, they can still re-publish their posts from their dashboard.

Once unpublished, this post will become invisible to the public and only accessible to Patrick Hund.

Thanks for keeping DEV Community safe. Here is what you can do to flag pahund:

Unflagging pahund will restore default visibility to their posts.