When you type change git commit or similar keywords in a search engine,
you find many answers explaning how to rewrite a commit message,
but not how to actually modify the contents of the commit.

Lets begin by listing our commits:

In this screenshot I use my gl alias which expands to:

Here I want to modify the contents of the third commit,
feat: Refactor and add features, because I mistakenly
committed modifications to the changelog
which I didn't want.

So I run an interactive git rebase down to this commit
by running:

This command launches your git editor (vim here)
to tell git what to do. Here we tell git to stop
right after the commit we want to modify: 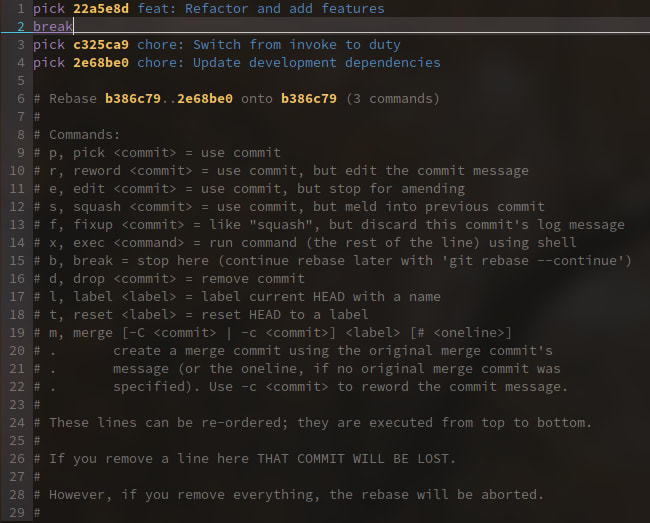 We save and quit this temporary file (with :wq),
and git tells us that it stopped at the desired commit:

Don't pay attention to the commit SHA:
I took the screenshot afterwards so they don't match 😄

Now you can start modifying, adding or deleting files!

In my case I wanted to remove wrong sections in CHANGELOG.md,
as well as remove conflict-resolution lines in pyproject.toml.

In this screenshot I use my gs alias
which expands to git status -sb.

All you have to do now is to amend the current commit
(the one at which we stopped, the one we wanted to modify):

OpenBB Is Pleased To Announce The Release Of OpenBB Terminal v 1.2! Now Better Than Ever!

Timothée Mazzucotelli
I am an open-source developer :) Love to create, love to contribute, love the community!
Migrate Disqus comments to Utterances (in GitHub issues) with Python
#howto #disqus #utterrances #python

Once suspended, pawamoy will not be able to comment or publish posts until their suspension is removed.

Once unsuspended, pawamoy will be able to comment and publish posts again.

Once unpublished, all posts by pawamoy will become hidden and only accessible to themselves.

If pawamoy is not suspended, they can still re-publish their posts from their dashboard.

Once unpublished, this post will become invisible to the public and only accessible to Timothée Mazzucotelli.

Thanks for keeping DEV Community 👩‍💻👨‍💻 safe. Here is what you can do to flag pawamoy:

Unflagging pawamoy will restore default visibility to their posts.