If you’re a hobbyist developer and you want to host your fun app for next-to-free, you should definitely use Google Cloud Run. Once you set it up, Cloud Run is a dream to work with, but getting started can mean a lot of trial and error.

In this post, I will go step-by-step through setting up GitHub Actions to automatically deploy your cool app to Cloud Run.

1. Install gcloud and do a local deployment

My initial idea was to write a “how to get started with Cloud Run” post, but it turns out the official Quickstart is excellent.

If you’re just starting out, follow Google’s Quickstart. It covers:

By the end of the tutorial, you will have installed the gcloud command-line interface (CLI) and used it to deploy your first container to Cloud Run. This article picks up after the Quickstart material: it’s intended for anyone looking to add a bit more automation to their deployments.

You will also need a GitHub repository — you know, for the GitHub Actions to work. If you’re more of a “see the code” learner, I created an example repo — pcraig3/hello-cr — as part of writing the article. Feel free to clone or fork it.

When you run gcloud commands locally, you’re probably using your root account (ie, tied to your email address) because that’s the default account you create when you sign up to GCP. For local development, that’s fine: your root account is a superuser with lots of permissions, so you can do whatever you need to.

However, you should really avoid using your root account on other platforms. If your account password is ever stolen, an evildoer can take over your entire G-Cloud setup and use it to host crappy websites, run up a huge tab, or steal your data.

Instead, you should create a "service account": a separate account with limited permissions intended for specialized tasks. If your service account is compromised, the aforementioned evildoer can take down your Cloud Run app, but they won’t be able to mess up too much else.

I’m most familiar with creating service accounts by logging in and clicking around, so that’s what I’m going to do here. If you’re smarter than me, you might prefer the command line, but all the same stuff will apply. 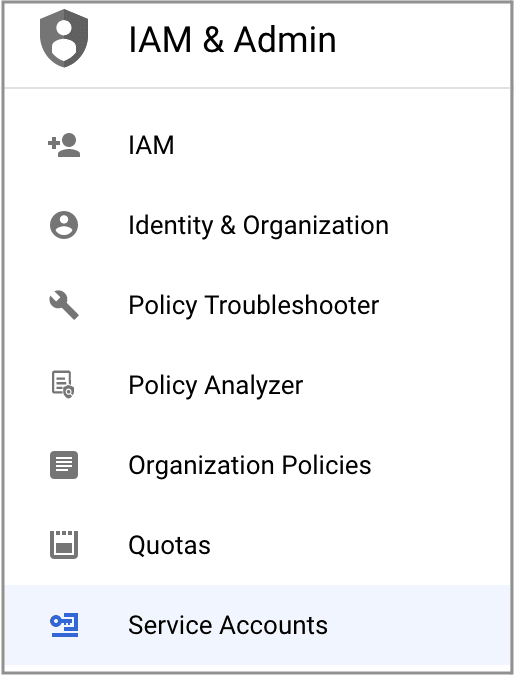 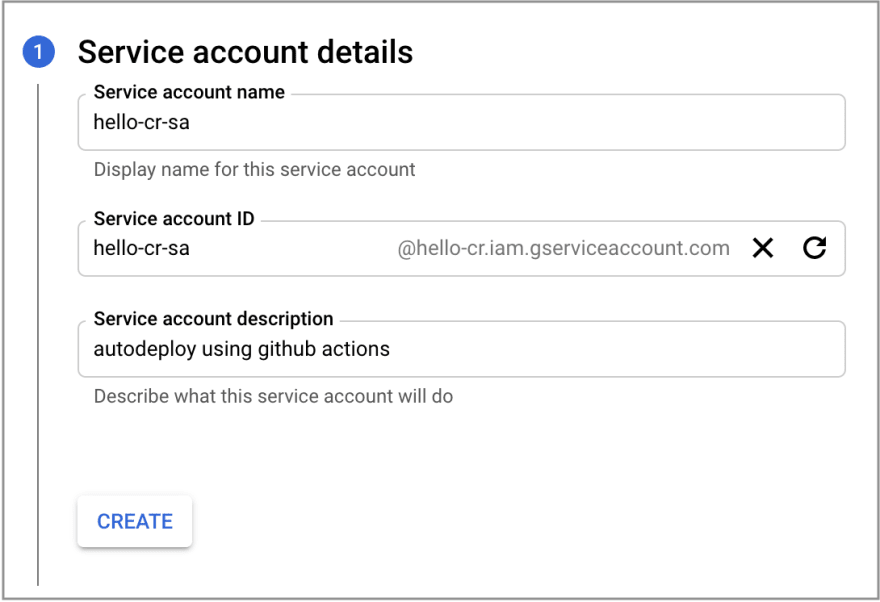 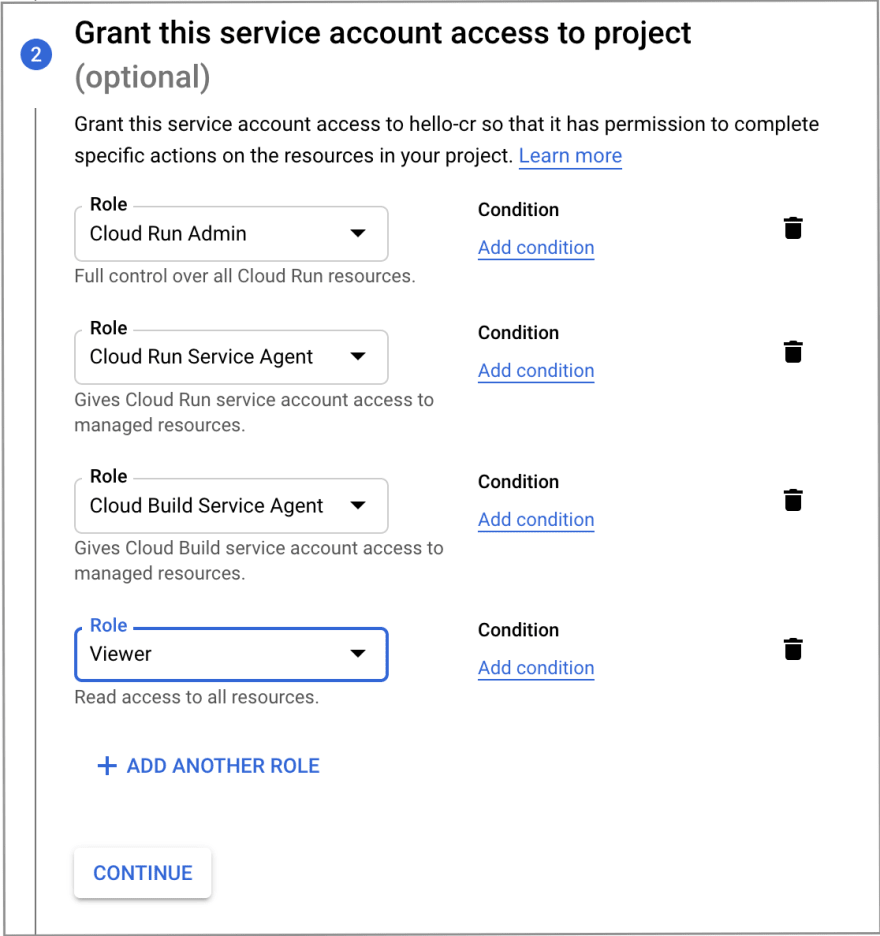 Hooray! Now that you’ve created your service account, let’s make sure that everything works as expected by trying a local deployment as your new service account.

Authenticating on the command line as a service account

Show all of your service accounts with

The account you just created should be listed there.

Replace EMAIL-ADDRESS with the email for your service account. Also, you probably want to rename the .json file to something less shouty. If you store it in your app directory, make sure to add it to your .gitignore file.

Now that you have the key file, you can authenticate yourself as this service account.

This way, you can run commands as the service account.

You should be able to build and deploy your app using your service account. To do so, follow the steps outlined in the Cloud Run Quickstart.

Build your container image using Cloud Build, by running the following command from the directory containing the Dockerfile:

where PROJECT-ID is your GCP project ID.

Replace PROJECT-ID with your GCP project ID. You can view your project ID by running the command gcloud config get-value project.

Nice! If the deploy succeeded, you know this service account has the permissions it needs to automate future deployments.

Setting up a "deploy" GitHub Action

Github Actions automate various parts of your development workflow: you can run tests, do linting, or trigger notifications based on certain conditions. You can also set up rules to deploy your app when your main branch is updated, which is what we want to do.

GitHub maintains a Marketplace of third-party Actions that we can use to plug into third-party services. Luckily for us, the folks at GCP have built a GitHub Action we can use to log in and run CLI commands: https://github.com/marketplace/actions/setup-gcloud-environment

GitHub Actions’ syntax is .yml-based, so let’s see what our deploy workflow will look like.

In the root directory of your app, create a file at .github/workflows/deploy.yml.

The Build and Deploy commands are pretty similar to those we just ran above, although there are a couple of differences. Let’s take a closer look at the build command.

If Actions are enabled for your repo, pushing your new deploy.yml file will attempt a deployment but it will fail because we need to add the secrets for our service account. The secrets we need to add are referred to in the env: section near the top of the file.

The RUN_REGION is hard-coded, but we have to create the other two secrets. Github’s documentation for creating secrets is actually really good: you can add them under "Settings" > "Secrets" > "New secret".

Secrets are encrypted as soon as they are created, and there’s no way to reveal the original values once saved, so if you are adding sensitive values in the future, make sure to add them as secrets rather than accidentally committing them to your repo.

Once you’ve created your secrets and committed your deploy.yml file, your next push to the main branch will trigger an automated deployment. It usually takes a few minutes to deploy a new version of your application (depending mostly on how long it takes to build your container).

While writing this post, I created an example repository using Google’s Node.JS sample application and added my workflow file to it. It’s super simple, and might help you out if you need an tangible example of these concepts. Feel free to clone, fork, or raise an issue if you have any questions.

This repository is a reference implementation for using Github Actions to continuously deploy a Node.JS application.

The deployment configuration is described in .github/workflows/deploy.yml. Whenever the main branch is updated, it will:

The app itself is based on the sample application used in Google's "Build and Deploy" Quickstart for Cloud Run.

The repo is MIT-licensed, so you are free to use or modify it however you like.

You did it! Get yerself light lager and a pizza. 🍕

Once suspended, pcraig3 will not be able to comment or publish posts until their suspension is removed.

Once unsuspended, pcraig3 will be able to comment and publish posts again.

Once unpublished, all posts by pcraig3 will become hidden and only accessible to themselves.

If pcraig3 is not suspended, they can still re-publish their posts from their dashboard.