updated 2020-01-24
-noted that the example in part 2 will use S2, not Geohash
-removed "relational" term when discussing spatial data types

Google Maps, Yelp, and Meetup all can help us answer a variation on the same question of "what X is nearest to Y". What subway stop is closest to my friend's house, where's the nearest sushi place, who else is interested in hiking in my town, etc. These sites use geographic data about points of interest, and our current location or a location of our choosing to calculate what's close.

We'll start by looking at points of interest on a line, then move our way up to 2d planes and then a globe. Along the way we'll encounter geohashing, an elegant solution to the problem of nearness.

Let's imagine a world with one-dimension. All points are described by a single value, the relative position on that single great line of existence. To avoid any unfortunate incidents, we can stay in our 3d world and just observe this lineland from afar.

We see 5 points of interest on the line, with the following positions:

With only one-dimension, the distance between any two points in lineland is simply the difference in their positions. If we want a lineland Yelp clone to answer the question of what restaurants are within 5 units of my house at position 1, we can use a brute-force approach by calculating the distance from every point to the center point:

We find three restaurants in the specified range.

As our dataset of points of interest grows larger, calculating the distance from every point to the center point is more and more work and our algorithm gets slower (or we parallelize the calculation and spend more computation in exchange for time).

Despite it's range of culinary delights, there's not much going on in lineland, so let's bump up another dimension.

Infinite Planes and the Distance Formula

We are now in the world of two-dimensions, with the familiar X and Y coordinate system of geometry and mathematics. We plot points of interest on an infinite plane, with a horizontal X position and vertical Y position.

In our plane world, we see the same 5 restaurants from lineland, but with positions composed of X and Y pairs: 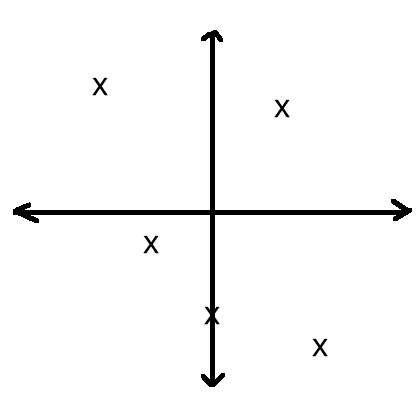 With two-dimensions the distance between any two points is calculated using a derivation of the Pythagorean theorem, the Distance formula, the square root of the squares of the differences:

In our 2d Yelp clone, we want to find restaurants within 5 units of my house at position (1,2). Again, we start with brute-force and do the calculation for every point to the center point:

Doing this calculation for 5 points is no big deal, but as the dataset grows larger, our algorithm needs more and more compute capacity and/or time. As with lineland, we address scalability by limiting the size of the dataset. The fewer points to feed into the distance formula, the faster.

To limit the size of the dataset we use a minimum bonding rectangle or bounding box:

As the diagram below illustrates, we can create a bounding box that is guaranteed to include at least all the points within R units of the center point. Given a point at (x, y), the four corners of the box will be at: 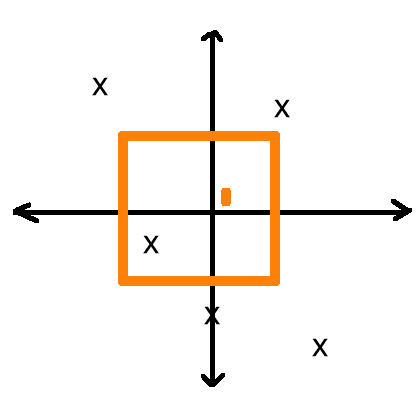 With these outer bounds defined, we can restrict the set of points we calculate the distance for to be only points between these bounds.

Without getting into the technical details here, most data stores have indices that support range queries to make finding the subset of points within the bounding box efficient.

With that, we're ready to enter the third dimension and think about distances over a spherical object, like say planet Earth.

While we use street addresses to locate places in our everyday lives, under the covers we are all using latitude and longitude coordinates:

The combination of these two components specifies the position of any location on the surface of Earth, without consideration of altitude or depth.

Before we move on, it is important to note that calculating the exact distance between points on Earth is far more complex than for points on a two-dimensional plane. Fortunately, for the scenarios we are concerned with, say locating the nearest taco stand, we are OK with simplifying our distance calculations at the expense of precision by making these assumptions:

With these assumptions in place, let's take a look at the 5 points of interest from our prior examples, now specified by latitude and longitude coordinates:

Me drawing those points on a sphere isn't going to help anyone, but if you are curious, these are all just locations selected around San Diego and Tijuana.

The Haversine formula itself is described in great detail on the Wikipedia page if you want to flex your geometry muscles. Lots of sines and cosines. The phi variables are latitude, the lambda variables are longitude:

In our 3d Yelp clone, we want to find restaurants within 5 miles of my house at 32.7584°, -117.1402° (not actually my house). Again, we start with brute-force and do the calculation for every point to the center point (in this case using an online calculator to avoid doing the math myself):

Many modern data stores have support for storing latitude and longitude pairs, as well as built-in functions for calculating the distance between these points. Typically these features or packages are called Spatial Data support or GIS (Geographic information system) support.

Even it is built-in to the data store, this type of calculation can get more and more expensive as we increase the size of our dataset. Again, our approach to limit computational and time use is to limit the dataset we operate on.

Conceptually, like with planes, we want to only calculate the distance between points that are within a bounding box around the center point. One method for calculating the edges of such a bounding box using latitude and longitude is described in this paper. The linked paper suggests that this method could be used with a SQL-compliant datastore to leverage latitude and longitude indices to select the subset of points in the bounding box and only then calculate the distance. A similar approach using MySQL specifically, is detailed in this post. There are many more similar techniques I came across while writing this post. I haven't tested them to give a concrete recommendation of one over the other.

The solution I want to talk about is called geohashing.

Geohash is a public domain geocode system invented in 2008 by Gustavo Niemeyer[1] and (similar work in 1966) G.M. Morton[2], which encodes a geographic location into a short string of letters and digits. It is a hierarchical spatial data structure which subdivides space into buckets of grid shape, which is one of the many applications of what is known as a Z-order curve, and generally space-filling curves. 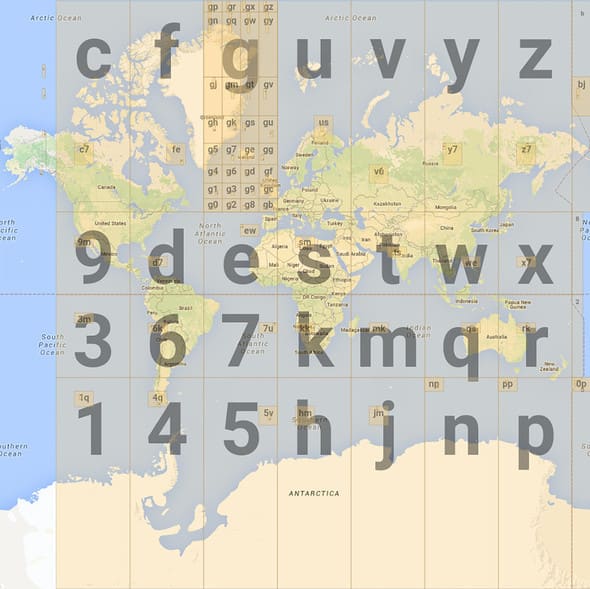 In other words, through geohashing you divide the world into a grid of squares and rectangles, addressed by hash. Any point on the earth (latitude and longitude) has a corresponding hash that fits into one of these grid cells or bins. To see a visual explanation of geohashing, check out this video or this page.

The length of the geohash we use determines how large the bin is. For example, a geohash length of 5 will give us an approximately 5 km by 5 km bin.

Geohashes were originally used as part of a URL-shortening service, but across the industry are now used for spatial indexing and searches as well.

To return to our Yelp-like example scenario of finding nearby restaurants, let's add 5 character geohashes to our points of interest:

To get a more comprehensive set of points of interest, we can get all the points in the center geohash bin and its 8 immediate neighbors. From there, assuming we want to be precise, we calculate the distance between all the points and the center, dropping the points that are too far away.

Like a bounding box algorithm, a geohash based algorithm can handle larger datasets by first chopping those datasets into manageable chunks for our distance calculations. Also, while the latitude and longitude based bounding boxes described above depend on the data store having support for spatial data, we can manipulate geohashes in any data store, as they are just strings.

The ability to use geohashes without custom spatial data types will come in handy in my next post, where I dig into a solution I studied that uses DynamoDB as a data store, along with some JavaScript functions to implement a simple Starbucks locator. This solution actually uses Google's S2 as a different type of geohash, which I'll explain. In that post, I'll also get into two issues of some importance that I glided past here: first, deciding how big a geohash to use in your application and second, how to find the neighboring geohash bins.

Once suspended, phm200 will not be able to comment or publish posts until their suspension is removed.

Once unsuspended, phm200 will be able to comment and publish posts again.

Once unpublished, all posts by phm200 will become hidden and only accessible to themselves.

If phm200 is not suspended, they can still re-publish their posts from their dashboard.

Once unpublished, this post will become invisible to the public and only accessible to Peter Miller.

Thanks for keeping DEV Community 👩‍💻👨‍💻 safe. Here is what you can do to flag phm200:

Unflagging phm200 will restore default visibility to their posts.