PS: This is a very fun front-end architecture model that can create unlimited fun. I wrote this article mainly because it is fun, and there is nothing new.

When I create Quake which is a meta-framework for knowledge management, with meta-data and quake component, you can combine any data to any component, like story in calendar with Transflow DSL from('story').to(<quake-calendar>, story is build from meta-data: 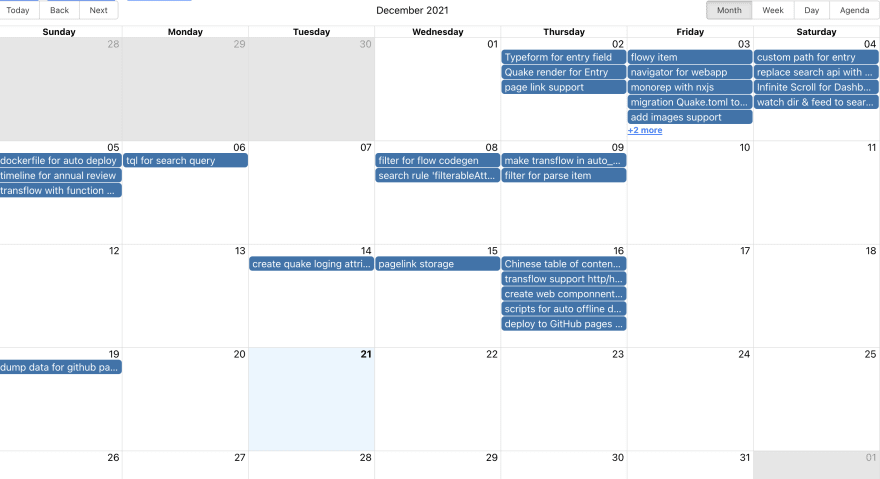 I found componentless is the pattern of Quake's low-code design principle, I decide to abstract the patterns of it. I call it Componentless:

Componentless architecture is an architectural pattern, it refers to a large number of rely on third-party components (runtime dependent components rather than compile-time dependent components, that is compilation as a service) or temporary storage of custom code running in the container Frontend application. The three-party components of the application, like the three-party API service, can be independently released and deployed independently, and the application does not need to be recompiled, built, and deployed.

From the name Componentless, you can know that its target is the serverless-like back-end architecture pattern. Therefore, the definition is quite similar to that of the Serverless architecture. That's why, we define it as a componentless architecture. You don't need to write any components, you only need to write logic code or DSL to achieve their combination. Moreover, we can only provide a DSL + universal URL, and the browser will complete the automatic construction and operation of the application according to the DSL.

Evolution of front-end and back-end architecture

Previously, it was quite interesting to often communicate with others about the application of domain-driven design (DDD) in the front-end. As a “nine and three-quarters”/10 DDD bricks, in the past, I always felt that domain-driven design is not suitable for the front-end. Clean front-end architecture is what people need, but design + getting started is slightly more difficult.

In this year, I have used DDD design and planning for multiple back-end applications, and I have a new experience (although it still doesn't work). The front-end can have a DDD-like approach, but the approach is completely different from the back-end. The back-end uses model and function as the basis of two different programming styles, and the front-end uses components + events as the basis of the programming style. Components are destructible, and events are orchestrated by designing event streams.

Therefore, you don't directly apply the idea of back-end DDD to front-end applications, unless the logic of your application is focus on the front-end.

For most of today's systems, they still remain in a state of "back-end microservices, front-end "big mudball"." The back-end microservices have been disassembled into individual microservices according to "Conway's Law" (of course, unreasonably splitting the microservices is another problem), while the front-end is still in a state of a big mud ball. Therefore, the micro-frontend is used as one of the (not the only) technologies to solve the organizational structure alignment and implement the architectural model of rapid release and online. It can split a single large application into multiple smaller autonomous applications, but they are still aggregated into one. It can be used to solve the migration of legacy systems, unify user experience, help multi-team collaboration, etc.

When migrating back-end systems, we use DDD (Domain Driven Design) to find a reasonable basis for the design of microservice architecture. Microservices have become a way for us to transform the legacy system. We start with one module and one function, and gradually replace the old single application until the entire system is replaced. This replacement mode is quite similar for front-end applications.

Therefore, after the transformation of the micro front end, the structure is aligned, and the personnel is aligned. Everyone is happy. 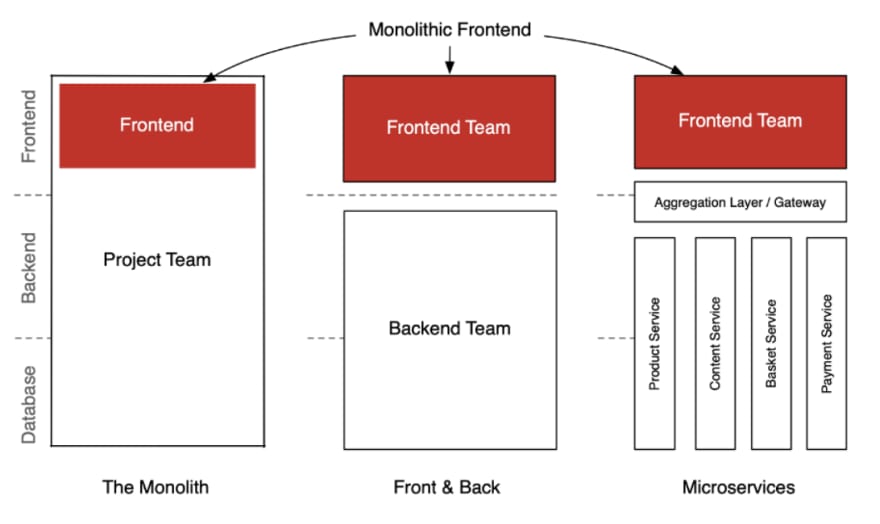 Going forward, how should we continue to evolve the system?

In 2017, after learning about DDD and Serverless, and create the "Serverless Application Development Guide" (https://serverless.ink/), I have been thinking about how to apply Serverless-like ideas in the front-end? So, there was an idea about the cross-frame component library: "The second half of the front-end: building a cross-frame UI library", but these domestic companies that write component libraries do not have such a bold idea, it is a pity-only the version number + 1, what others do follow? There is also an interesting story line. After experiencing the enthusiasm of low-code programming, I rethinked the future of front-end and back-end: "Front-end and back-end integration: Will the front-end and back-end separation die?".

At first, I thought no-code programming was a ComponentLess direction, but a research found that it was not. Nocode programming tends to visualize programming, while Componentless tends to use DSL programming. At this point, I prefer to use Web Components + WASM technology to build a new front-end architecture.

Until I recently reapplied this idea in the open source knowledge management tool Quake, I found it particularly interesting, so I wanted to write an article to introduce the related idea-after all , The market has accepted the Serverless concept and the micro front end concept. Then, the remaining questions become very simple.

Continue back to the definition at the beginning:

Componentless architecture is an architectural pattern, it refers to a large number of rely on third-party components (runtime dependent components rather than compile-time dependent components, that is, compilation as a service) or temporary storage of custom code running in the container Front-end application. The three-party components of the application, like the three-party API service, can be independently released and deployed independently, and the application does not need to be recompiled, built, and deployed.

Simply, what a componentless thing needs to do is to turn the component into a runtime service instead of a compile-time dependency in the past. When all the components become a kind of infrastructure, we no longer need these components, and then let the components disappear from the application development side, and achieve a state where the application does not require components. In this way, it has also become a LowCode type system, with simple code generation, it can reach the state of NoCode.

Example: How to move towards a Componentless architecture?

In terms of the process, it can be divided into three steps:

The remaining part is fill-in-the-blank programming.

1. Use Web Component to decompose the application

For now, with the support of Custom Element + Shadow DOM, we only need to update the link to the script tag of the component library, or the cache. 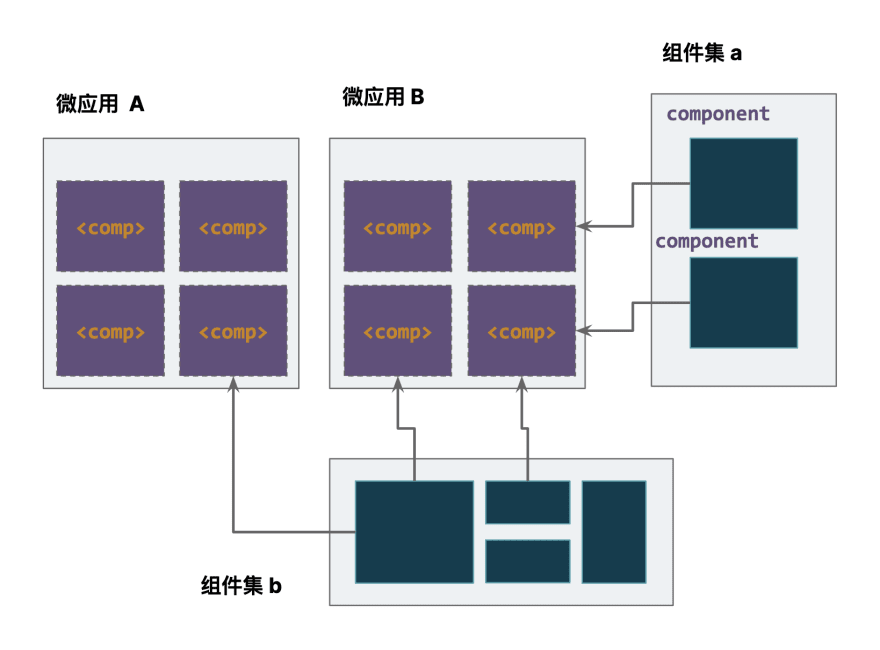 These are not important. Now there are very few "components" in our application-we still have some components for orchestrating these components + some additional business logic.

When using a framework like Serverless Framework, we only need to fill in our business logic on this function, that is, fill-in-the-blank programming. For the front end, the process is similar. We have data and our target components. Only a limited code generation function is needed. That is, we only need to generate an empty function to be improved, such as Transflow in Quake: from('todo','blog').to(<quake-calendar>), the generated function and logic (part of the code example ):

At this time, you only need to ensure that the routing and functions are not modified, and the remaining part is to fill in the blanks for data processing.

In addition to the above-mentioned direct decomposition method, there are other gradual migration methods.

From the current personal understanding, its core concept is: Components are "services." That is, components can be deployed and updated freely, just like services. After the component is updated, the application has also reached the update of the application in a sense.

In addition, there are such as:

In addition to the many advantages mentioned above, it also has a series of shortcomings to be solved:

In a sense, componentless architecture is a generalized low-code implementation mode. Because of the more independent component model, the low-code system it builds is more interesting:

It's just that, in terms of mode, there is not much difference.

None of the above is interesting. After we adopt Web Component as the implementation technology of componentless architecture, there will be more room for architectural display. Web Components is already a very good container similar to Docker, which can play various fancy containerization modes. We tried some patterns at Quake, which brought a series of challenges, but it was also very interesting.

Based on the features of WC, encapsulating the components of the existing mainstream frameworks such as Angular, React, Vue, etc., can quickly provide such capabilities. For example, the QuakeTimeline and QuakeCalendar we provide in Quake are all in this way. React components are packaged as Web Components:

Since the WC components are exposed to the outside, it doesn't matter what front-end framework is used.

In the cloud-native model, the Ambassador model can create services or applications on behalf of consumers and send help services for network requests. The same event can also be encapsulated by components,

However, I wrote this just for fun. I created a Loading component and inserted the <fetch-api> component in Loading to initiate an HTTP request. After the request was successful, the DOM was destroyed.

In this way, I only need to replace this request component to replace all request APIs.

For example, in Quake's markdown rendering engine <quake-render>, the <embed-link> embedded in the page is rendered conditionally, and the embedded page of the is also markdown, so we need a , So you can "mock doll" infinitely, until the current page of the browser is hung up.

In terms of usage, the two components A and B do not have such a mutual calling relationship.

PS: Actually this is a bug. Later I thought it was a features.

In the cloud-native patterns, the sidecar model refers to the deployment of application components into separate processes or containers to provide isolation and encapsulation. In this regard, it is also very simple for Web Components.

There are still many, you can play slowly when you have time.

Think outside the frame and think about the problem, and you will find all kinds of very interesting things.

The Harsh Reality for JS Developers: If You Don't Study The Fundamentals You Will Be Just Another “Coder”

Once suspended, phodal will not be able to comment or publish posts until their suspension is removed.

Once unsuspended, phodal will be able to comment and publish posts again.

Once unpublished, all posts by phodal will become hidden and only accessible to themselves.

If phodal is not suspended, they can still re-publish their posts from their dashboard.

Once unpublished, this post will become invisible to the public and only accessible to Phodal Huang.

Thanks for keeping DEV Community 👩‍💻👨‍💻 safe. Here is what you can do to flag phodal:

Unflagging phodal will restore default visibility to their posts.