Part of every product development is proper testing of the application.
There are numerous ways of testing it and explaining all of them is definitely a subject for several blog posts.

In this post I will concentrate on a particular scenario.
We want to run integration test using Maven build against application deployed on remote Tomcat. Surely we could use embedded Tomcat, but let's say we want to verify that it runs properly in its target environment, e.g. staging where different other components may require proper configuration, like database, other services etc.

In this post, I will explain how to configure Jenkins build using the descriptive pipeline. The build will at some point download test coverage data from remote Tomcat server using Jacoco plugin.

I will use a sample Spring Boot application which has REST endpoint.
We're going to query this endpoint from our functional tests. Here is the project.

There are several parts involved in this configuration:

Let's start from the Pipeline definition.
Jenkins Pipeline is a very nice feature which allows configuring builds from a text file. I like this idea mostly because it allows storing build configuration together with source code in the same repository and control versioning. You can see the complete Jenkinsfile here.
I just wanted to give you a feeling of what you can do with it.
First, you can manage which tools you will need for the build.

These are the names which you used in Jenkins Global Tool Configuration.
E.g. for JDK it would like like below:

Then you can define a list of stages, each executing several steps.

The stage below is running maven command which produces WAR file to deploy on Tomcat.

Next, we can execute shell commands.

The commands above use SSH to invoke remote commands:

As you see the Jenkinsfile is very straightforward and allows quick configuration of the entire pipeline. Definitely more friendly way than clicking through Jenkins UI.

Our build is running remote commands via SSH. To allow it we have to give Jenkins Host permission to connect to Tomcat Host through SSH.
This is very easy. I will skip how to install SSH on both hosts. It can be easily found in the internet.
Then we need to generate SSH key on Jenkins Host (if does not exist) but use blank passphrase (otherwise we cannot input passphrase in non-interactive mode when pipeline runs and it will fail)

and confirm default answers.
This will create two files: ~/.ssh/id_rsa and ~/.ssh/id_rsa.pub.
The last one is the public key. We need to take content of this file and copy it on Tomcat server to file ~/.ssh/authorized_keys

Now we can test connection and run from Jenkins Host

Where tomcatuser is an existing user on Tomcat Host who has permission to start/stop Tomcat and tomcathost is (as you probably guessed ;)) Tomcat Host hostname or IP address.

On Tomcat we need to update configuration to allow running Jacoco agent.
This is the tinny Java program which will start when Java Virtual Machine starts, instrument deployed classes and gather information required to calculate coverage data on runtime, when we query REST endpoint.
When we will run Jenkins build it will download this coverage data through TCP/IP, because Agent on Tomcat is listenning on a port.

This is a line which needs to be added on Tomcat Host in $TOMCAT_HOME/bin/catalina.sh at the very beginning of the file

It needs to have path to jacocoagent.jar which you download from Jacoco site. You can find it in downloaded ZIP in lib folder.
It needs also port number. You can use any free port. This is a port on which Maven Jacoco Plugin will connect to download coverage data.

The last, but not least part, is setup of build on Jenkins.
Here we go..
First create a new build. 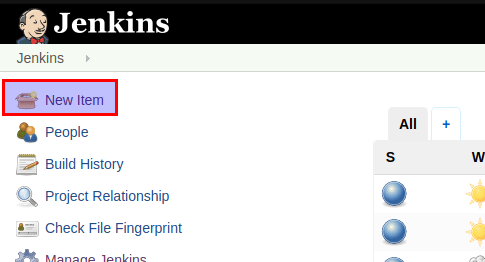 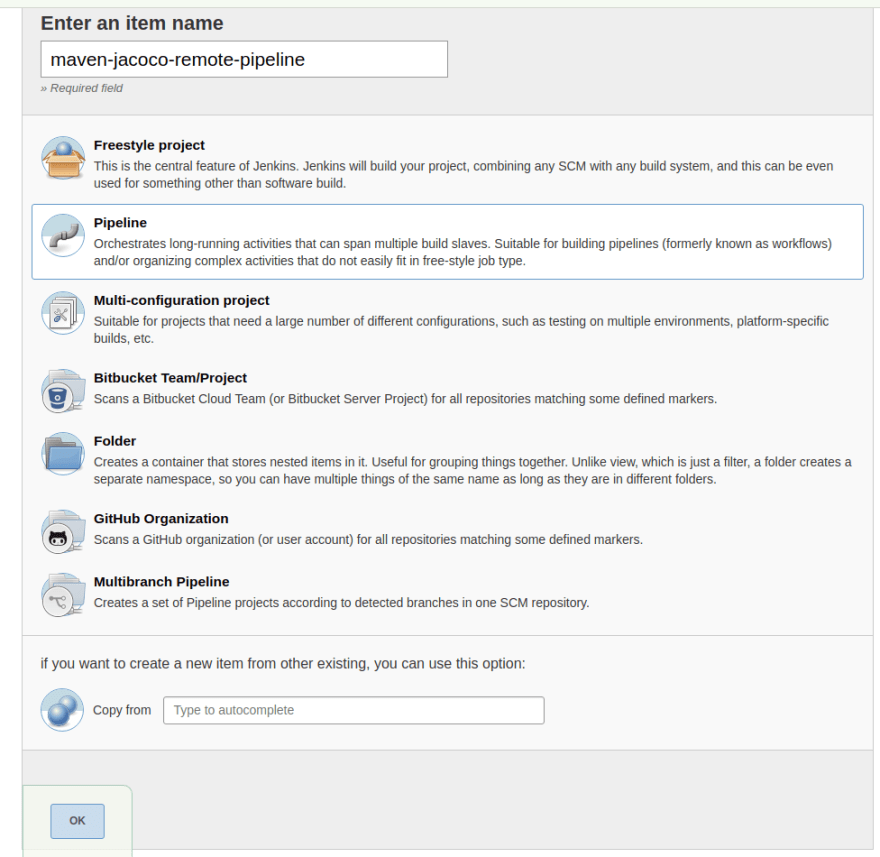 Finally configure the Pipeline as in the image below. 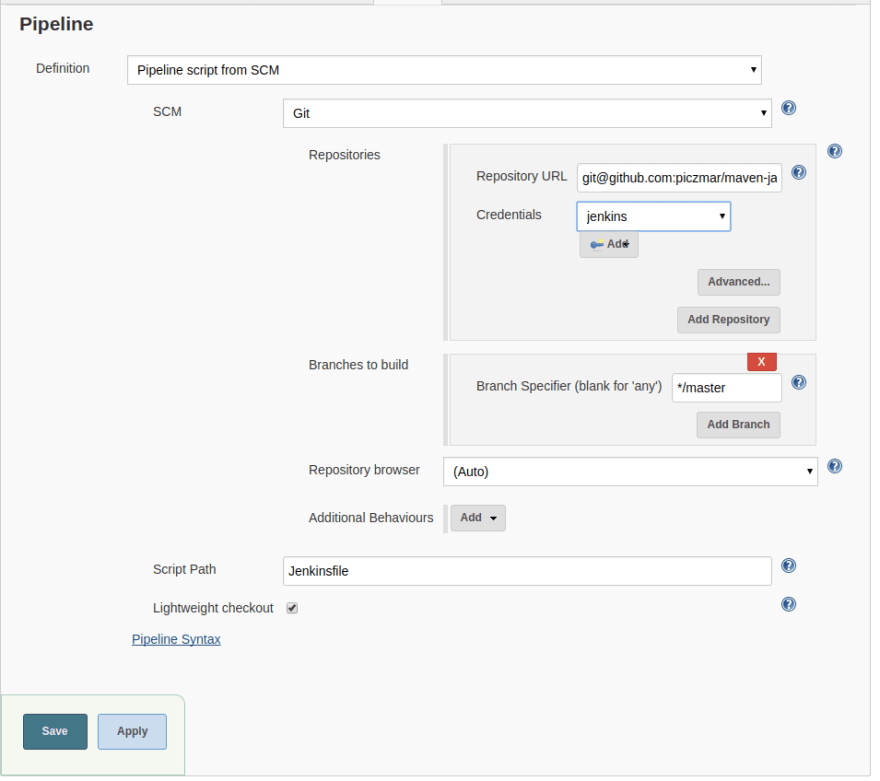 All you need to do is to specify Github repo and the path to Jenkinsfile relative to project root. It is a good practice to put the file at the top of your project (next to pom.xml) because it simplifies stages definition - all paths in command can be given relative to root, e.g. mvn .. command. Otherwise it will need more twicks.

Last part is to test the build.
Let's run it manually. Then we can setup any triggers we want just like for any other Jenkins build. 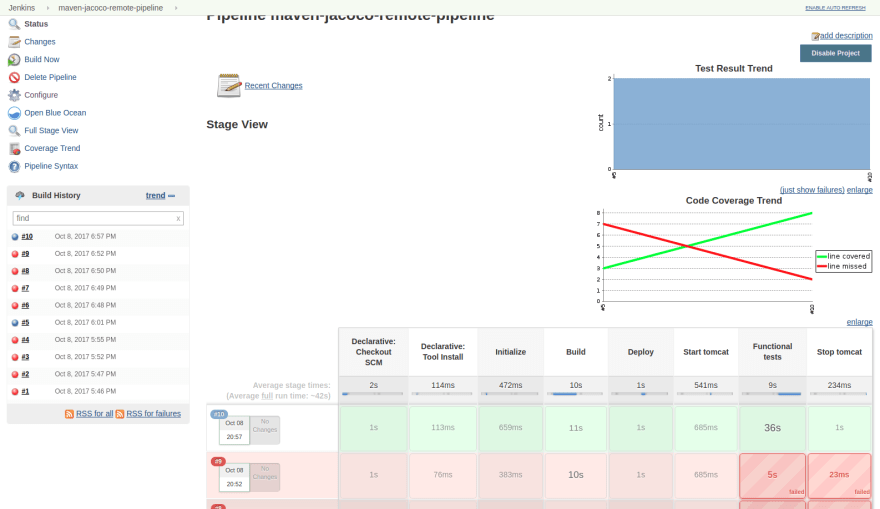 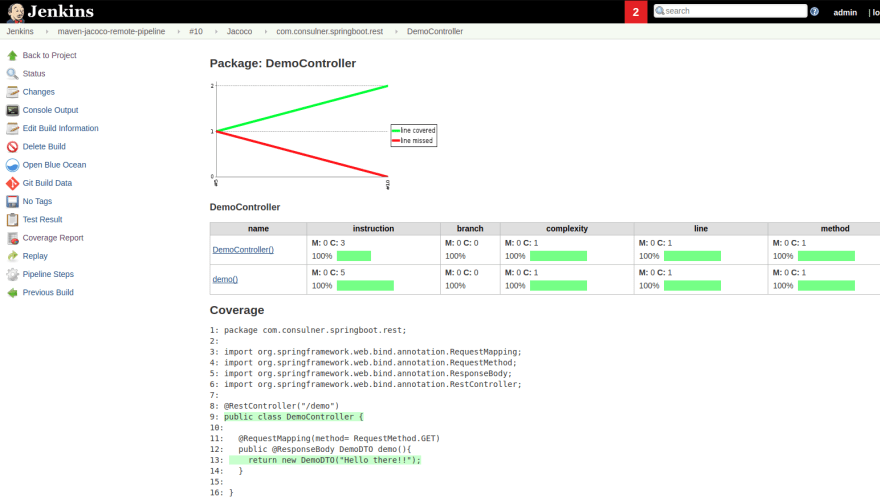 That's it. Hope you enjoyed the article.

FormData from Form in mutation!

Once suspended, piczmar_0 will not be able to comment or publish posts until their suspension is removed.

Once unsuspended, piczmar_0 will be able to comment and publish posts again.

Once unpublished, all posts by piczmar_0 will become hidden and only accessible to themselves.

If piczmar_0 is not suspended, they can still re-publish their posts from their dashboard.

Once unpublished, this post will become invisible to the public and only accessible to Marcin Piczkowski.

Thanks for keeping DEV Community 👩‍💻👨‍💻 safe. Here is what you can do to flag piczmar_0:

Unflagging piczmar_0 will restore default visibility to their posts.