This tutorial talks about a powerful bug trap that was introduced in Ada 2012: the Type_invariant attribute.

The idea of type invariant is pretty simple. Sometimes data structure are quite simple, just an aggregation of values, but often they are quite complex with an internal structure that needs to be preserved.

A type invariant associated to a given type is a Boolean expression that is true for every valid value of the type. Ada allows the association of a type invariant to a private type; the compiler — if instructed so — will insert code that checks that the invariant remains satisfied; if not, an exception will be raised.

An example: a table with two keys

Let's do a simple example. Suppose that

A possible solution is shown in the figure 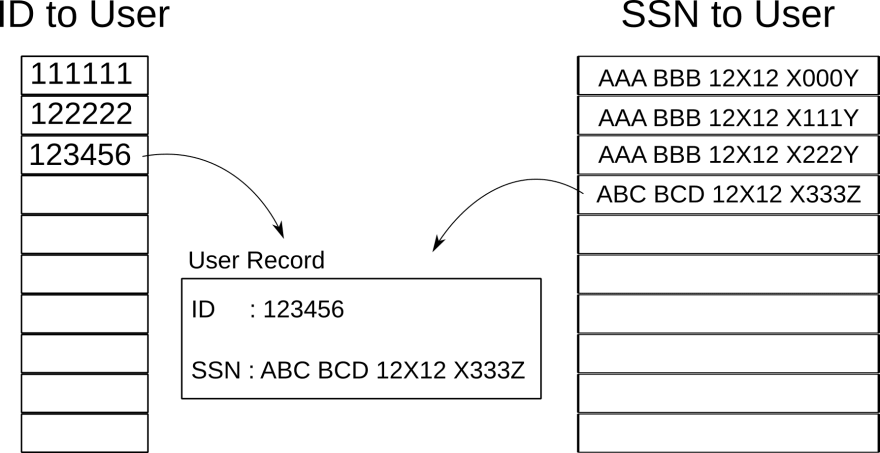 The data structure is made of two Ordered_Maps: one map is indexed by the Serial_ID, the other one by the SSN and both maps store pointers (access values in Ada jargon) to a User_Record, a record that contains the user information. This structure clearly introduces some (quite obvious) redundancy

This is an excerpt of the public part of the spec file (roughly the *.h of C)

Let's look at the implementation of the package. Let's start with Add_User.

The implementation of Add_User is quite straightforward: with

we allocate dynamically a record with the user information and with

we update the two internal tables by associating the given ID and SSN with the address of the newly allocated record.

This is our first tentative to the implementation of Delete.

This implementation has a bug 🐛, as it is clear from this figure that pictures the behavior of Delete. 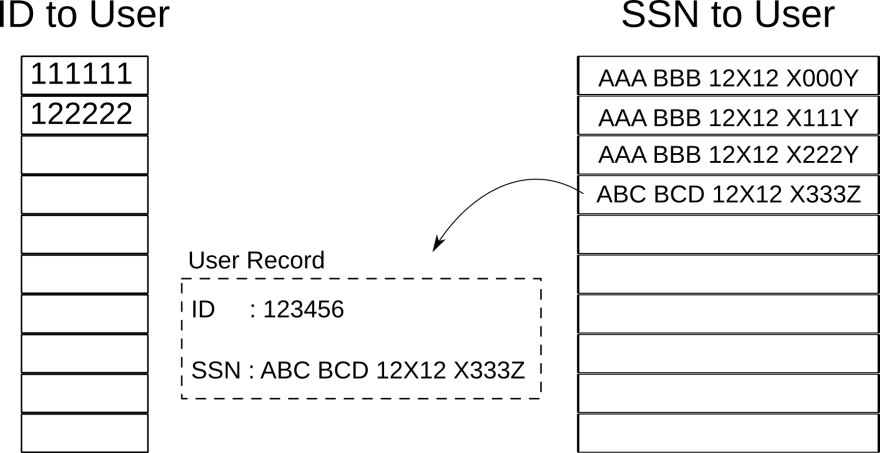 The dashed line means that the memory area of the user record now has gone back to the heap. It is clear that we forgot to remove the entry from Dir.SSN_To_User and now we have a dangling pointer referring to the old user record.

This is a nasty bug.

Oh, yes, believe me. I have already seen this movie, actually I was the main character. What could go wrong? Well, for example, later you could want to update the entries of Dir.SSN_To_User in some way. However, the memory that was assigned to the user record now belongs to some other structure that will be corrupted by your update.

Depending on your code, the bug can remain dormant for long time, then, suddenly, one day, if you are lucky, you get a SEGFAULT when you try to use the corrupted structure again. If you are unlucky you'll get funny random behaviors, possibly difficult to replicate.

Even if you are lucky (so to say...) you'll get the SEGFAULT in a place totally unrelated with the real bug in Delete. Believe me, finding this bug can take days of stumbling around in the dark. Not even an army of rubber ducks can save you. 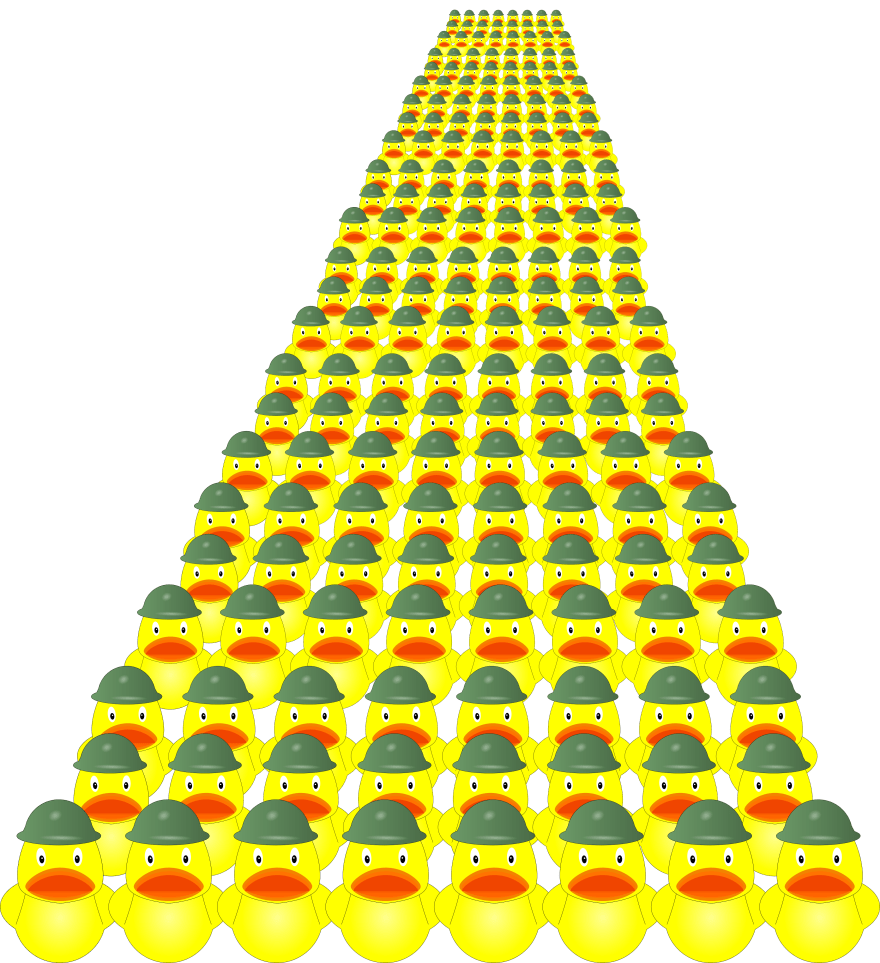 Although this is a specific example, this kind of time bomb 💣 (or Sword of Damocles) behavior is typical of bugs that cause a loss of internal coherence in some complex structure. The bug will not manifest itself when the structure is corrupted, but later as a delayed consequence of the loss of coherence, making bug hunting difficult.

Fear not, my friends and colleagues. Ada comes to the rescue with the Type_Invariant. It suffices to add it to the type definition as in

where Is_Coherent is a function that checks that the whole structure is coherent, that is, that the two maps have the same number of entries and that the data in the user record match the corresponding key in the tables. The source code of the (fairly long) function is included, for reference, at the end of this post.

Now if we run the following test program

we get the following results

where, for the sake of readability I replaced part of the dump text with ⋯. The line

refers to the line where type User_Directory is declared. In the stack dump the first two lines refer to some system files, we are interested in the third line

that refers to the first line of procedure Delete.
Summarizing, 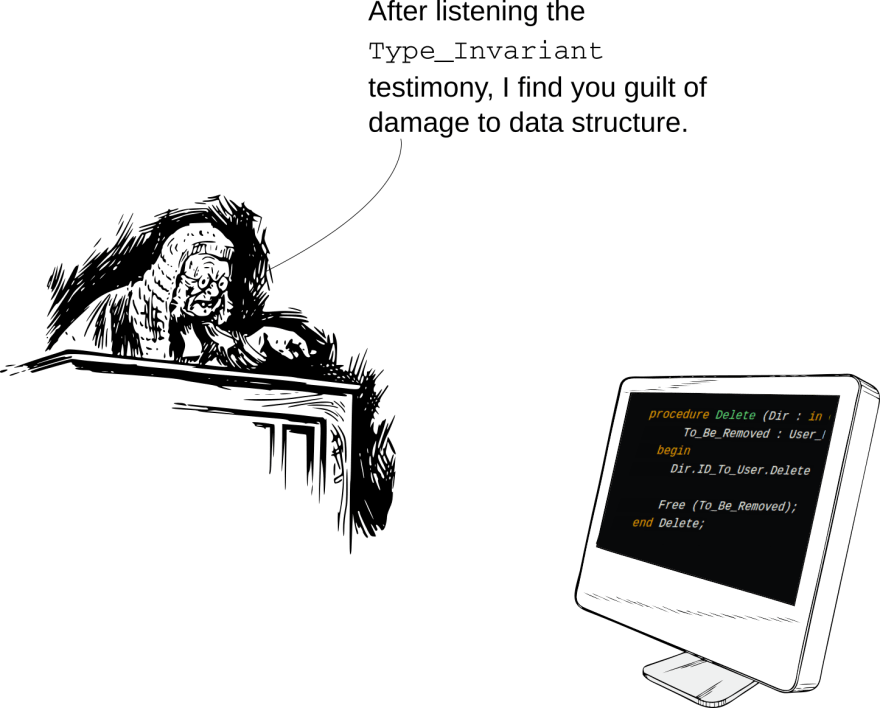 Someone maybe could observe that at the line -- and here??? the variable Dir is in a non coherent state since we updated one table, but not the other. The same happen in the Add_User procedure. Wouldn't this raise an exception?

Well, no. The details are a bit complex, but the basic idea is that since Add_User and Delete are declared in the same package of User_Directory, they are able to operate on the internal structure of the type and it is acceptable that during this manipulation the internal structure is not coherent for a moment. The type invariant will be checked only when the procedures end;
see the Reference manual if you want every single, gory, detail...

Riccardo Bernardini
I graduated in 1990 in Electrical Engineering and since then I have been in university, doing research in the field of DSP. To me programming is more a tool than a job.
Proving the correctness of a binary search procedure with SPARK/Ada
#spark #ada #formalchecking #tutorial
Watchdoging in Ada
#ada #watchdog #multitask #threads
Safer set-uid programs in Ada with the suid-helper library
#setuidprogram #safety #ada