The Haxe Foundation recently released Haxe 4.0 and I decided to check it out. Here's what's new in version 4.

Haxe runs on Windows, Mac, and Linux. You can download it here.

Haxe is an open-source high-level strictly-typed programming language with a fast optimizing cross-compiler.

So the high level strictly typed programming language makes sense, but a fast optimizing cross compiler? What's that about?

So the general idea here is "one language to rule them all". You write your application in Haxe, then it compiles to another language to target a platform. Basically it treats the output language (like JavaScript, C#, Python, etc) as bytecode for your application.

So I decided to try that out. 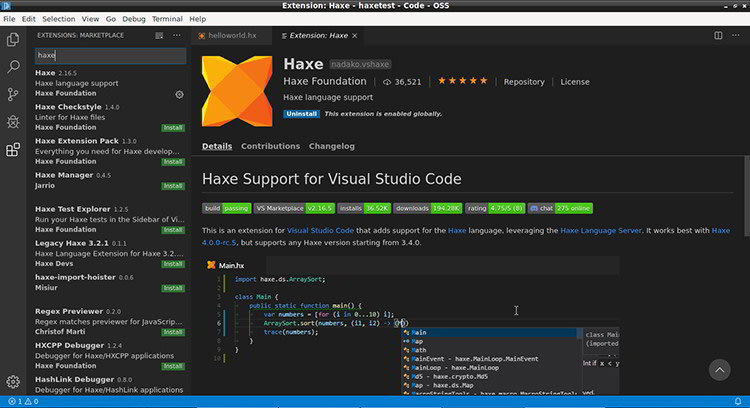 I was delightfully surprised to see a bunch of extensions for Haxe in Visual Studio Code.

So the hello world in Haxe is simple:

This looks pretty much like any other C based language you've looked at. We can clearly see a class defined with a static function, and in that is "trace"? (weird name for an output function) and the text to be displayed. So first let's build a javascript file from it:

The file runs and it outputs this:

Let's see if it works. I included it in an HTML file and got the following: 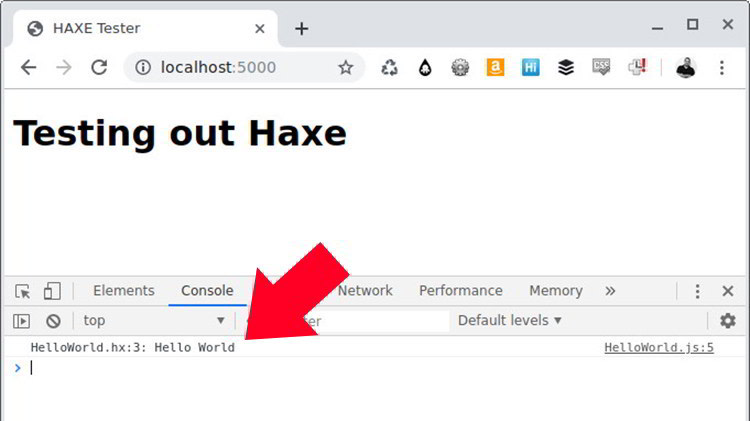 So I decided to play around with it a little:

And then I generated another JS file: 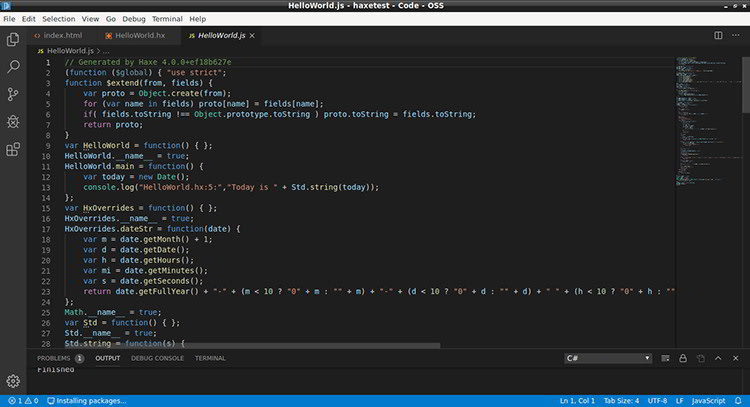 That's a little crazy, but then I load it up in a browser:

And it works! It's written the date to the console. Pretty cool.

So enough playing around with JavaScript, let's generate our hello world in Python:

I run it and it generates the following code: 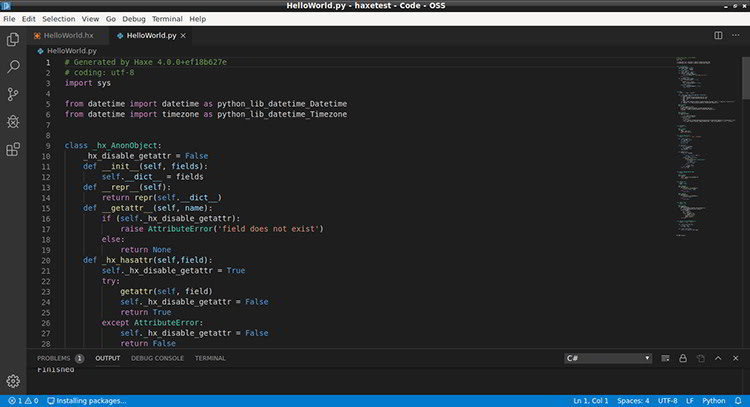 And it looks like it works, with the exact code I used for JavaScript. So far so good.

and it generates this: 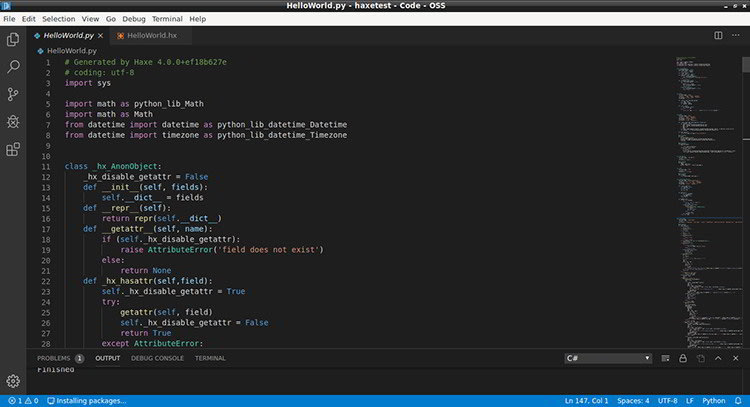 Wow. Even more insane code to generate... a date? Well ok. I run it.

Cool! It actually worked with zero modification to the original haxe file.

Instead of the 486 line python file haxe generated I could have simply written:

But I digress. This is an edge case and not a thorough test so I'll withhold judgment for now, I'm sure haxe has to scaffold a lot of things and do some setup for when you truly use the language to develop a real application.

So with C++ and given what I've seen so far I have no idea what to expect.

With this one I have to install the hxcpp library, but it's easy enough:

Then I just change my command a little here:

and after running it, appears to scaffold a bunch of stuff: 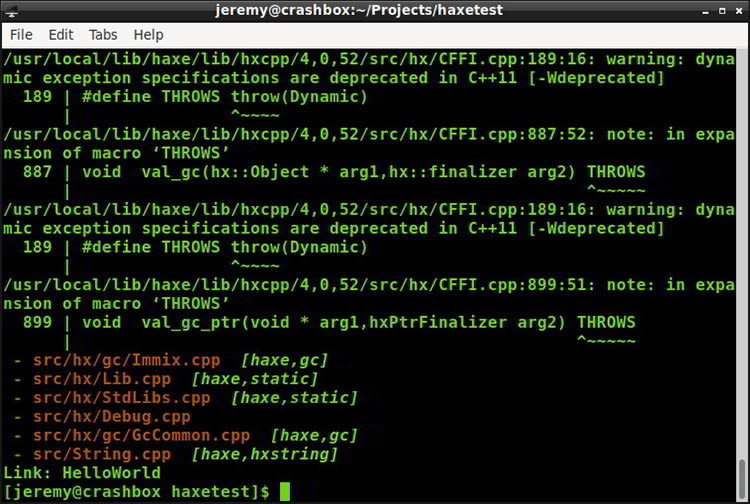 and it generates a folder named HelloWorld.cpp:

So I go in and run the exe.

again it generates a ton of code: 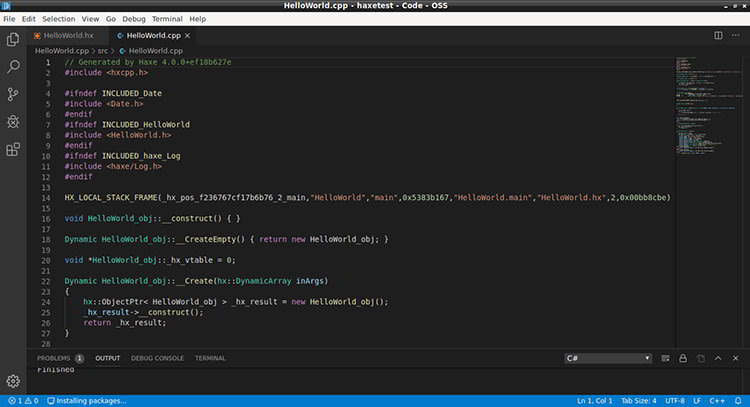 but again it's probably just scaffolding for when people build actual applications with it.

The date display works the same:

So this is pretty cool stuff! Imagine something that generates JavaScript, Python, or C++ from a single codefile.

So let's build a little node webserver, I stole the idea from this tutorial

first I have to install the Haxe nodejs library:

Then I create a file named Main.hx

and then compile (transpile?) it:

And then run it with nodeJS:

And it runs! Pretty easy. The JavaScript it generated looks like this:

Which actually isn't too bad!!

This isn't a thorough review of Haxe, just playing around. While doing this I didn't:

-It's easy to install - It's available in Windows, Mac, or Linux. I used Arch Linux for this article, at this time the repository still has 3.4.7-1 but I was able to grab the 4.0 binaries, point haxe to the standard library and get going. It took minutes.

-It worked as expected - I generated a lot of stuff just playing around with it, and I didn't find any "why does this happen" moments. Clearly some work has been put into making this solid, and it shows.

-It's a really cool concept - I like the idea of using one solid language to generate many kinds of outputs. Some may avoid this pattern but I think if it's done right it can reduce developer effort.

Why would anyone use this? 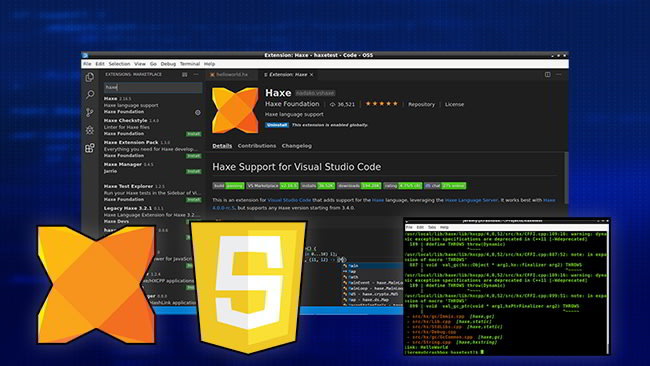 So you might be asking yourself why anyone would use this? It's basically a fancy transpiler right?

Not exactly. While I didn't really build anything out I did research some of the language features and it appears to be a very mature language with a lot of features I like, such as:

If I were building a real application with this, I'd be tempted to evaluate it based on what I've seen.

Remember languages are not meant for compilers, they're meant for you. Any language that you can get good at and feel productive in is worth a look, and maybe Haxe is the one for you.

Try it out and let me know what you think in the comments!