We had a course this spring, Virtualization, which had a project component.
You must've heard about virtualization, how things look unified from one end but are an orchestration of multiple services at the other end. We've multiple types of virtualization - ones that range from virtualizing entire Operating Systems (dual boots / Oracle VirtualBox) to virtualizing the desktops. I had to select a topic for the project and on some research found storage virtualization interesting.

Here's the source code for the project.

Storage Virtualization is practically providing a unified view on a cluster of storage devices, managed in such a manner that we have data safety and size/performance optimization.

A decent issue with having a storage solution is data de-duplication, which means trying to remove unnecessary copies of files that take up your resources. And I intended to solve the issue with my project(a distributed file system) while getting hands-on experience with managing multiple servers and implementing a management system within it.

The web framework I am most comfortable working with is Express(Node.js), and hence chose the same coupled with EJS templating for the frontend views.
I also decided to make use of docker for containerized services and using docker swarm to orchestrate them.

I wrote some general upload code in express using multer for managing them, then packaged it into a docker image. The base image was the LTS Node.js one, and I used docker-compose to do it in an organized manner.
Docker swarm is used to manage the cluster, and provides fault tolerance by having replicas and whatnot. What I wanted here was easy to perform hostname mappings for my storage servers.
The dockerfile I used for building the image

We see that I set the working directory as /usr/src/app. During development, I mounted the current folder as a volume, so nodemon would automatically detect all the changes and reflect them immediately. The development docker-compose file -

Since I had developed on blockchain platforms during the past year, my initial go-to logic was to make use of not block-chaining itself, but the tech that lies underneath it, Distributed Ledger Technology.

At this point, the project was ready and showed the implementation for the first review. Professor suggested to include some meaningful changes, and the one I liked most was delivering files by geographical proximity to the server.

I moved to the cloud this time. Created 5 droplets on digitalocean, with each one having a separate data centre - New York, Toronto, Singapore, Bangalore, Amsterdam.
I changed the architecture a bit this time - had a central server that served the frontend and maintained metadata of each file stored(I know that it is a bottleneck, but was enough for a class project) 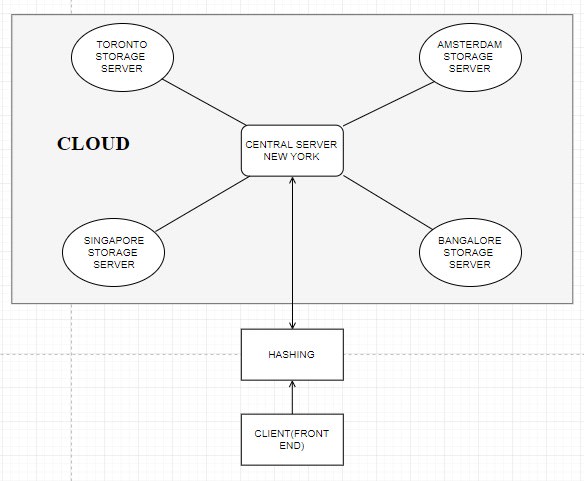 What I also did, was hash the files in the client side, by making use of the FileReader API coupled with the Forge library. Here's some code for it.

So now, only the file hash was being sent to the server as an ajax, and if the hash wasn't present, the file was freshly uploaded.

When the central server received the file, it selected two storage servers to store it in and then updated its metadata file.

So this time, when a new request for a file comes in, I used APIs like ipstack and distance24 to determine what location(city, preferably) the IP is from, and how far the city was from each of the storage servers. The servers are then sorted by distance, and the a URL is generated for the closest server, and returned. When the user clicks on the link, the file is downloaded.

Docker and Docker Swarm have been extremely helpful in this scenario, since I can simply specify the deployment constraints, pull and distribute images and so on.

What was your first project with distributed systems? Let me know in the comments below. Here's the source for the project.

Build a Minimal API with HereDoc and Docker

Once suspended, presto412 will not be able to comment or publish posts until their suspension is removed.

Once unsuspended, presto412 will be able to comment and publish posts again.

Once unpublished, all posts by presto412 will become hidden and only accessible to themselves.

If presto412 is not suspended, they can still re-publish their posts from their dashboard.