In this post I will tell you how my blog reached 1 million page views.

Where it all began

I began blogging for 3 main reasons:

I only realised how useful having a blog could be when I listened to John Sonmez's book Soft Skills. He tells you how important it is to have a personal brand. Whether you are looking to change jobs right now or not, you should be marketing yourself. As a developer, one of the best ways to do this is by having a blog. There is so much good advice in this book, I always recommend it to people.

If you're like me and prefer to listen to the audio version of a book, it is also available on Audible. That's how I "read" it.

John's advice was so valuable to me. I started writing blog posts, trying to be helpful to others. Whenever I came across a problem and it was painful to solve, I would create a blog post about it to save other people from that pain and make it easier for them.

After about 4 or 5 months of creating articles and not many people reading them, I was inspired on my lunch break at work to write a post called 10 golden rules for becoming a better programmer. I had heard that list style posts were popular and opinionated posts seemed to divide people so that people who liked it shared it and those who didn't like also shared it, even just to tell people that they disagreed with it. Anyway this post was a bit of a hit with the programming community. I put it on social sites like facebook, twitter and LinkedIn Groups. I also shared it on Hacker News which was a good move because it stayed on the front page for most of the day. In one day that post got nearly 14,000 page views and within the space of a week it had around 25,000 page views.

Lots of people were linking to this post from their websites, sharing it on twitter, facebook and LinkedIn and even including it in their programming email newsletters. Because of this it helped my google SEO ranking a lot. Even though the traffic died back down after the first week, google was starting to send traffic to my site for this article and some of my other ones too.

Following on from the success of my 10 golden rules post, I realised that list post do well, so I started to think of other posts I could write:

These posts generated quite a bit of traffic, but it was nothing like the traffic I saw from the 10 golden rules article. I wanted that feeling of excitement again. I was chasing it.

I was driving the traffic manually

Because I wanted to see a lot of traffic to my website, I was sharing the articles everywhere. At the time, the most effective place to share them was in the LinkedIn groups. The .NET Developers group has 300k members. Even if people didn't like my post, they would comment on it and it would keep it at the top of the group, which sent traffic to my site when they clicked on it. This wasn't sustainable. People would get bored of seeing my articles at the top of these groups. I was pushing it down their throats. The traffic needed to be organic instead.

In the first year, only 7.9% of traffic to my website was organic and 62.1% was from Social sites. 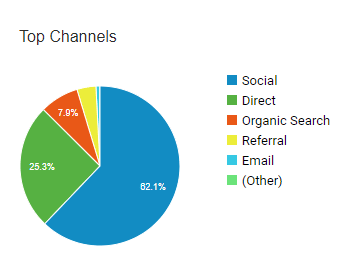 I need to focus on creating good content that people want to search for, not gimmicky content of lists, or posts which polarised opinions.

They weren't useful to the reader, they just got people clicking through from reddit etc.

I started to write more tutorial based blog posts. Ones which helped solve a problem for people rather than just gave me the immediate page view numbers in Google Analytics.

In my second year of blogging, it was the more technical posts like these which did well:

They were solutions to problems I had myself and other people were searching for solutions too.

So in my second year of blogging, 56.8% of page views were from organic search. 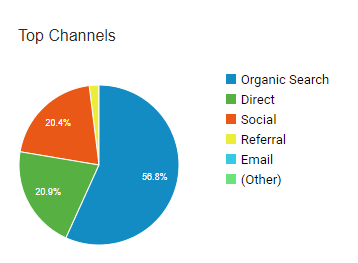 John Sonmez said if you are going to write a blog, you need to create at least one post per week, be consistent with it, have a regular day when your posts are released. This helps to create a following.

I would say I was more prolific than consistent, but regular posts of at least one per week really helped when it came to organic search.

This chart shows you the organic traffic from the beginning until June 1st 2019 (3.5 years)

A redesign and a move to https

In early 2018 I changed the site to run over https, I was worried about messing it up and losing all of my organic traffic, but luckily I had put the correct rewrite rules in place to redirect the traffic to the https route.

I also dropped the www. off the front of the address to make it a shorter url. I was already having to put the redirects in place, I may as well take this opportunity whilst I'm at it.

My site was looking very bootstrap and not very modern. I wanted to buy a new premium theme that would look more professional so I did some research and found that Creative Tim made the best looking premium bootstrap websites. I had to pay about $50 for the theme but it was worth it.

I don't know which of the above things was responsible, but my organic traffic just kept growing and growing from then onwards. See from 2018 onwards on the above chart.

I daren't change anything at the moment. SEO seems to be working perfectly for me. I only include the meta description and meta keywords. I don't implement schema.org or anything.

I've just carried on writing posts to help people overcome errors that I was experiencing, such as:

I must be doing something right with these posts because google loves my site at the moment.

The main things that have helped my website get to 1 million page views are:

3 years ago, I wrote a post and made a video on How to find the hidden dinosaur game in Google Chrome. It was mildly popular at first but it soon died off. Just recently I have noticed it being a popular page again on my site. Here's the traffic for the post:

What's the Difference Between a Parameter and an Argument?