Hybrid app developers around the world know full well the power and beauty the Ionic Framework provides. Ionic makes it easy to create hybrid mobile apps that have a mostly native look and feel. However, for many scenarios there is an increasing need to provide a truly native solution. Therefore it seems obvious to leverage the best of Ionic's CSS components to add some style to NativeScript, Progress's open source framework for developing truly native cross-platform apps with JavaScript.

But Isn't CSS Built for the Web?

Who doesn't miss the days of <font face='Verdana' color='green'>Hello World!</font>? What's that? Nobody? Many years back, CSS introduced a new paradigm of providing a (relatively) easy way to develop and maintain consistent styles for our web properties. While it's not without its detractors - hence the rise of SASS and LESS - CSS is still how we style websites and hybrid mobile apps.

That's why when the NativeScript team needed to implement a way to style apps, CSS was a clear choice. For developers who wear many hats, there is nothing like being able to re-use an existing skillset when learning a new technology. By implementing a subset of CSS, NativeScript developers can use such CSS selectors as types, classes, and ids - and also use CSS properties like margin, padding, color, border-width, and so on.

Take a look at the NativeScript docs for a list of supported CSS selectors and properties.

By default, NativeScript generates real native UI elements for iOS and Android. No offense to Apple and Google, but out of the box, native apps just aren't all that pretty! But thanks to the NativeScript CSS implementation, there is a lot we can do about that.

The Beauty of Ionic and The Power of NativeScript

While best known as a hybrid app framework, Ionic is just as well known for its CSS components and gorgeous color palette: 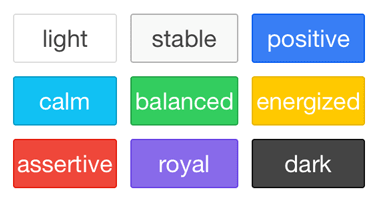 Combine this with a JavaScript framework that works with Angular or Vue.js, and well, it's easy to see why Ionic and Kendo UI are popular for web and mobile development.

The advantages of going native are evident, so our best bet is to utilize a framework that lets us leverage the skills we already have to create native apps. Enter NativeScript:

NativeScript is a powerful JavaScript framework that lets you build apps with the skills you already know (JavaScript/TypeScript, CSS, XML for markup, and optionally Angular or Vue.js).

Looking to get started with NativeScript? Check out the getting started guide.

It doesn't have to be a this-or-that situation though, when we can combine the best of Ionic and NativeScript!

What better way to enable existing web and hybrid developers to see how easy it can be to migrate to native technologies than to merge the beauty of Ionic with the power of NativeScript! Hence an Ionic-inspired CSS theme for NativeScript was born!

For example, by simply using simple CSS class definitions like these:

...and applying them to a NativeScript UI elements like these:

...we get a fully styled native UI element on the device PLUS usage of Ionic's font icons:

You can find the complete repo on GitHub. It's open source of course, so feel free to download, complain, and/or contribute!

And while you'll find the included app.css file to be purposefully verbose, you may be surprised by how much you can style a native app with very little code, using the CSS techniques you already know today. Enjoy!