Java 14 was released in March 2020 and one of the features that drew our attention was Records. Let's start by explaining what a Record is and then proceed with the potential use cases.

Note: Java 17 is about to be released (September 2021) which is the first LTS version with records support.

Records provide a compact syntax for declaring classes which are transparent holders for shallowly immutable data.

This feature attempts to reduce the amount of boilerplate code in our applications as you only have to define the fields (equivalent to class fields). Records provide a public constructor (with all arguments), read methods for each field (equivalent to getters) and the implementation of hashCode, equals and toString methods.

This is how a Record and Class, for the same data structure, would look like.

As you will notice this is significantly less code given the class' utility.

So where could the Records be used then? One potential application is in rest controllers. Sometimes it can be quite frustrating having to create a class only to be used as a return type or a request body in a rest controller.

In the next section we are going to demonstrate how to build a spring boot rest api with Records.

The code for this demo could be found here:

You can use spring initialiser (https://start.spring.io/) to create a spring boot project. The configuration for our demo is:

Everything else could be left with the default value.

If you are using an IDE you need to use jdk 16. For Intellij set the project sdk to 16 and the project language level to 16. 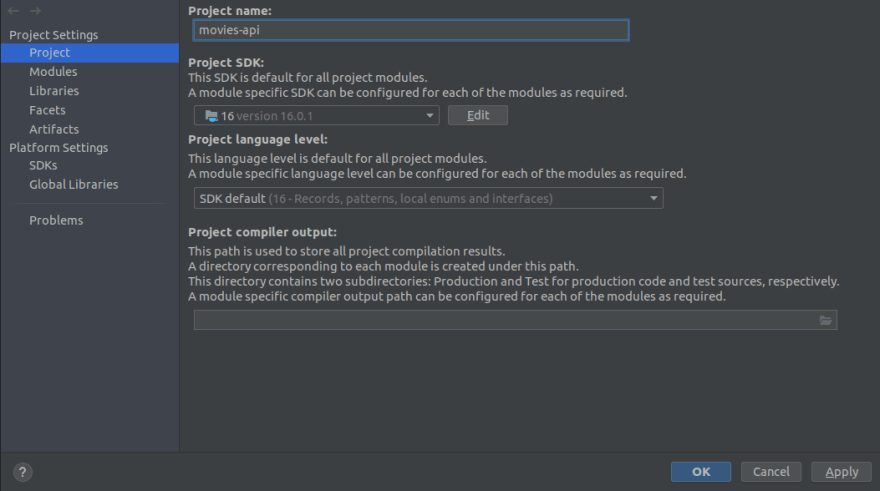 If you are using java 16 you can skip this section.

Before we create the rest controller we need to define the Records.

Next create a rest controller with 3 endpoints, one to retrieve all the movies, another to retrieve a movie by id and the last one to add a movie (we don't actually save anything as this is to demonstrate deserialisation).

Start the application and call the first endpoint, localhost:8080/movies. The following error is produced as the objects cannot be serialised.

The solution to that is to use Jackson annotations and in specific JsonProperty annotation.

Restart the application and you will be able to retrieve the list of movies.

The getMovie endpoint (localhost:8080/movies/1) uses the id() method which is provided by the Record. That way we can compare the id of each movie with the id provided in the api call.

Finally the addMovie endpoint is just a mock endpoint but it proves that deserialisation is also working. To test that you need to do a POST request to localhost:8080/movies with a valid body.

What could Records mean for the future of java? Maybe they are not meant to be used that way, but in general that feature is something that a lot of java developers anticipated. The fact that Records are immutable is adding a massive value. All the above in combination with the reduction of the boilerplate code make Records a promising feature.

Languages of the Future

Communicating Between JavaScript and Java Through the Cordova Plugins