Who doesn't love these awesome GIFs? These are used heavily on social media, and many among us(*cough* Myself *cough*) couldn't live without these (Prove me wrong 😎)

However, these GIFs are costly. They eat up loads of CPU and GPU power, are huge in file size. This GIF above 👆 is 890kb when downloaded. This number may not seem huge, but it's MP4 version is only 132kb.

And it barely eats any CPU. Even the oldest of devices will play it easily

You can convert a GIF to MP4 by running this command

What are those weird options? I'll explain later.

However, you'll have to manually run this on every single GIF.

But we, the developers don't like to do that🙄. So let's automate the process. 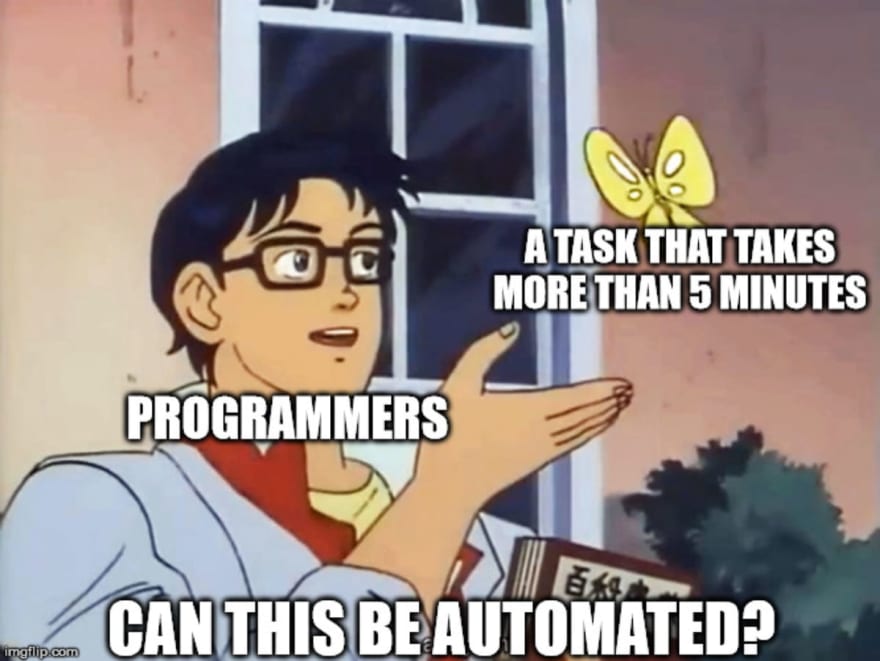 We'll require a binary of ffmpeg and will have to figure how to use it. And we'll need to download the right binary. What I mean by this is that in a real world application, you'll be deploying the code on cloud/servers, and you'd need FFMPEG there too.

If it's your own server, you can upload it there manually and it'll work. But you can't directly upload the binary to Cloud environments like Google Cloud Functions/AWS lambda without a lot of preprocessing and testing on your end. You'd have to keep a Ubuntu compatible FFMPEG binary alongside your own OS based binary, and still it won't work properly.

But thank the NPM Gods, we have the package @ffmpeg-installer/ffmpeg that installs the right binary based on the operating system. If you are running Windows, it'll download the ffmpeg.exe file. If the OS is linux based, it'll download specific binary for that.

And there's also an amazing package called fluent-ffmpeg which provides a very declarative, callback-based API to interact with FFMPEG.

So let's download these. Make sure you have npm setup.

The @ffprobe-installer/ffprobe package is also required by FFMPEG.

First, let's set up FFMPEG paths in our index.js file:

The code snippet above ☝ is not optional. Not having this config will break your program

Now, the code to convert GIF to MP4

When this process finishes, you'll have a vidgif.mp4 sitting right where you intended. It'll be much smaller in size, and will play perfectly fine.

Now this will play just like GIF! playsinline is necessary for it to run automatically on IOS Safari, and is also good for performance.

But wait! There's a catch!

If you push this file to production, and try to view it on Android or IOS, you'll see a blank area where the GIF should be visible. Why?

The code above doesn't encode the new MP4 video for maximum compatibility.

The file you generated will work fine on a computer which comes with all kinds of codecs preinstalled. But your phone's browser won't be able to parse the video file.

Remember the code snippet on top? Here it is again 👇

This code snippet works perfectly. The output.mp4 here works on phones too. But how do we translate it to fluent-ffmpeg format 🤔?

Courtesy of this gist

Once suspended, puruvj will not be able to comment or publish posts until their suspension is removed.

Once unsuspended, puruvj will be able to comment and publish posts again.

Once unpublished, all posts by puruvj will become hidden and only accessible to themselves.

If puruvj is not suspended, they can still re-publish their posts from their dashboard.

Once unpublished, this post will become invisible to the public and only accessible to PuruVJ.

Thanks for keeping DEV Community 👩‍💻👨‍💻 safe. Here is what you can do to flag puruvj:

Unflagging puruvj will restore default visibility to their posts.