Whenever an activity starts, you’ll see something like this in the logcat output:

This duration (1,380ms in this example) represents the time that it took from launching the app to the time when the system consider it “launched,” which includes drawing the first frame (hence “Displayed”).

This article is a deep dive to explore the question:

What does ActivityTaskManager measure exactly?

I know you're impatient, let's jump to the conclusion: ActivityTaskManager measures the time (uptime on API < 30, realtime on API 30+) from when system_process receives an Intent to start an activity to when the window of that activity is done drawing. 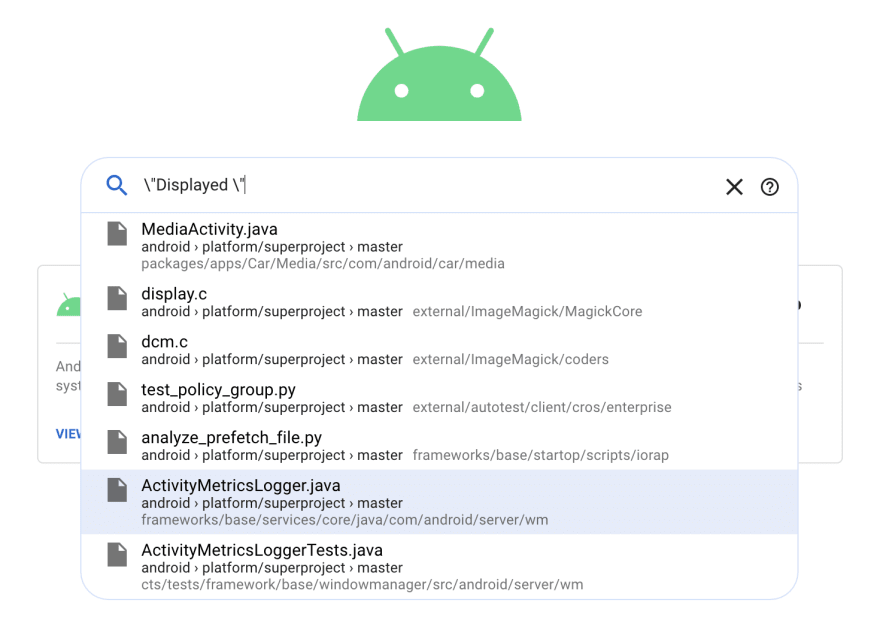 This leads us to ActivityTaskManager.logAppDisplayed():

ActivityMetricsLogger.notifyActivityLaunching() captures the start of the activity transition:

We now know where the start and end timestamps are captured, but unfortunately ActivityMetricsLogger.notifyActivityLaunching() and ActivityRecord.updateReportedVisibilityLocked() have many call sites, so it's hard to dig further within the AOSP source.

I was telling a friend I hit a dead end looking at the Android sources, and he asked me:

Why don't you put a breakpoint?

Duh. I have never tried to debug system_process, but there's no reason we can't. Thanks Vincent for the idea! Lucky for us, Android Studio is set up to find sources for the Android version the app is compiled against:

I can put a breakpoint like I would in my app:

Using a rooted device, I can connect a debugger to system_process: 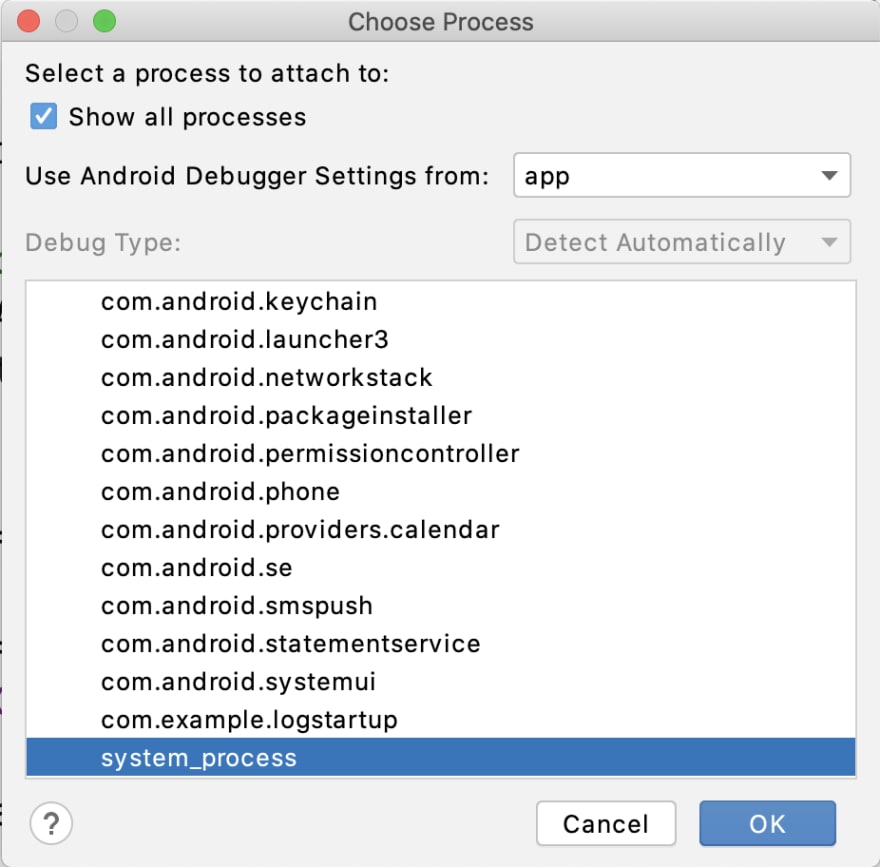 When I start my app, I hit a breakpoint for ActivityMetricsLogger.notifyActivityLaunching():

and another breakpoint for TransitionInfoSnapshot.notifyWindowsDrawn(): 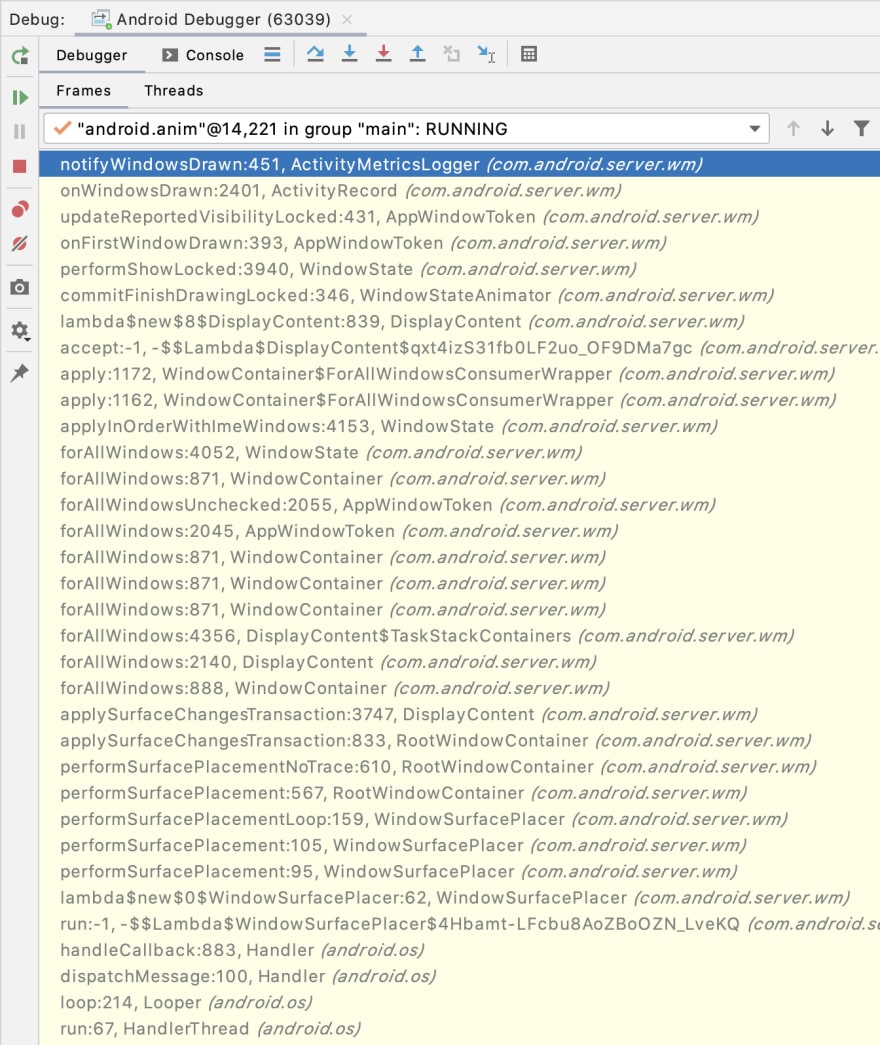 In Android Vitals - Diving into cold start waters 🥶, I explored what happens on app startup and concluded:

The user experience of launching an activity starts when the user touches the screen, however app developers have little influence on the time spent before ActivityThread.handleBindApplication(), so that's where app cold start monitoring should start.

How much time is ActivityTaskManager adding?

In Android Vitals - When did my app start? ⏱, I showed that we can use Process.getStartUptimeMillis() to get the timestamp at which ActivityThread.handleBindApplication() was called. I also shared a code snippet to read the process fork time (see Processes.readProcessForkRealtimeMillis()). We can logs these 2 values to logcat:

We also need to log ActivityMetricsLogger.mCurrentTransitionStartTime. We can make our previous system_process breakpoint non-suspending and have it log the value. The output of Evaluate and log goes to the debugger console. We want all logs in logcat so we're invoking Log.d() from there:

That's 129 ms from receiving the intent to forking the zygote process, and 193 ms from forking to ActivityThread.handleBindApplication(), i.e. 322 ms before the app starts loading its code and resources. In this example, that's ~30% of the app startup time reported by ActivityTaskManager.

The real number is lower than that, since system_process was running with a debugger connected. Still, it's significant enough that you should have this extra penalty in mind when measuring app startup with ActivityTaskManager.

Measuring app startup time from within the app

In Android Vitals - First draw time 👩‍🎨 I showed how to determine the first draw time. I compared that timestamp with the timestamp passed to TransitionInfoSnapshot.notifyWindowsDrawn(), and the two values are only a few milliseconds apart.

We can put together what we've learnt to measure the app startup duration from within the app:

How to manage dependencies between Gradle modules?

Once suspended, pyricau will not be able to comment or publish posts until their suspension is removed.

Once unsuspended, pyricau will be able to comment and publish posts again.

Once unpublished, all posts by pyricau will become hidden and only accessible to themselves.

If pyricau is not suspended, they can still re-publish their posts from their dashboard.

Once unpublished, this post will become invisible to the public and only accessible to Py ⚔.

Thanks for keeping DEV Community 👩‍💻👨‍💻 safe. Here is what you can do to flag pyricau:

Unflagging pyricau will restore default visibility to their posts.