You use automation in CI builds, packaging etc. – why don't you use it for keeping your docs up-to-date?

Being highly individual, docs aren't the first thing coming to mind as candidates for automation. At the same time, writing docs and keeping them up-to-date takes a considerable amount of time and hence teams would profit a lot if at least parts of a project's docs could be generated automatically.

Let me share our experiences we made at Storefront UI with the auto-generation of our components documentation.

With today's surplus in tools, libs and software, documentation becomes an important factor: Good documentation is key for many developers for choosing a framework or library in the first place. Knowing what to use when and how (and why not something else) is the bare minimum of information you need in any docs.

But there is more: A major point for frustration is a docs page with outdated information, errors or typos in syntax sections or examples. Users of your software heavily rely on your docs—oftentimes even more than you as the author might think. Keeping them

is what you should aim for.

All too often on the other end of the development cycle you'll find automation. Automating image optimization, builds, the whole Continuous Integration/Deployment pipeline, test runs and similar monotonous, repetitive tasks, seems rather obvious. In fact, everything that requires minimal to no human intervention is a perfect fit for programmatic automation. New and old tools and (online) services help with each and every angle you might want to—and should!—outsource from you and your team and lay in the hands of computers.

The initial efforts necessary for setting up such scripts almost always pay off in the long run. Not only because the time you save in the process adds up but also because (as long as the predicates of your automation scripts don't change) the outcome stays error-free; something most humans cannot achieve.

But how can you automate documentation?
Normally, documentation consists of several parts, with some having an explanatory character and being prose, while others strongly relate to code. Hands down, the former is currently almost impossible to automate. Let's take a look at the latter though: Examples for such code-related docs sections include:

We can see that these parts are perfect candidates for automation! They themselves follow a rather strict convention and are therefore per se programmatically extractable. E.g. we can introduce a new build step for our documentation which gathers facts from the actual source code and maybe more information derived from the general directory structure and the presence/absence of files.

If you are maintaining docs for a library or any software containing components, you could traverse the structure of your components' locations and collect the components you are passing by.
Maintaining such a list by hand, i.e. updating it whenever a component is added, moved, removed, drastically altered, works only for so long. At some point, you or a team member will introduce discrepancies.

Going further, the source code itself serves as a rich source of information for your docs. In many cases, components and fields in your code already are annotated with an important type of documentation: comments. By extracted and implementing them in appropriate parts of your final docs, you generate an always correct reference for your software. As soon as a code part leaves your source, it is automatically removed from your docs, keeping your users from confusion.

How We Automated Our Docs at Storefront UI

Storefront UI is an open-source component library with far-reaching customization options and as such it depends on good docs as the main entry point for future and as a reference for current users.
When I joined the Storefront UI core team last summer there were exactly three (3!) components (somewhat) fully documented. To be clear, this was no oversight of the team but simply due to the fact that the team efforts were focused on pushing the (at that time alpha-state) library with features. Having seen my fair share of projects, I was part of this situation more often than not.

Meanwhile we introduced several techniques that help us automate our components docs:

With these changes alone we were able to deliver useful docs for all our components.

we need to go deeper.

Storefront UI includes Storybook as another way to see our components work. Each "story" of a component already includes the source code needed to implement the behavior and appearance you see in the preview panel. Why not use that for the docs, too?

We managed to parse Storybook's .stories.js files in a way that the result is usable as example code snippets for our components docs. Each so-called knob in a story is transformed into a Vue prop with an appropriate type, with its data value being simply the Storybook knob value.
With only a little of sanitization of imports and the like, we end up with a clean usage example for a component with only one source of truth (in this case in the Storybook file) but with two output formats, always as up-to-date as the component itself and the storybook file. 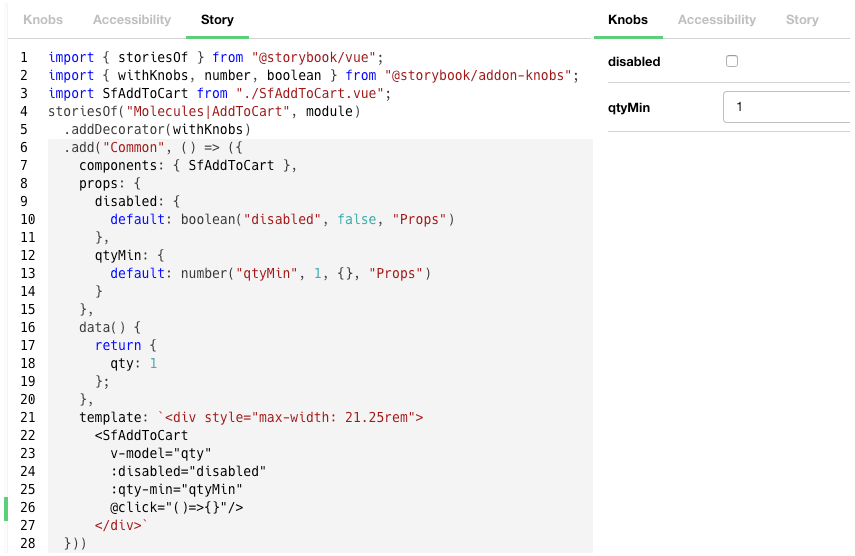 Result of a Rendered Component with Functional Vue Syntax: 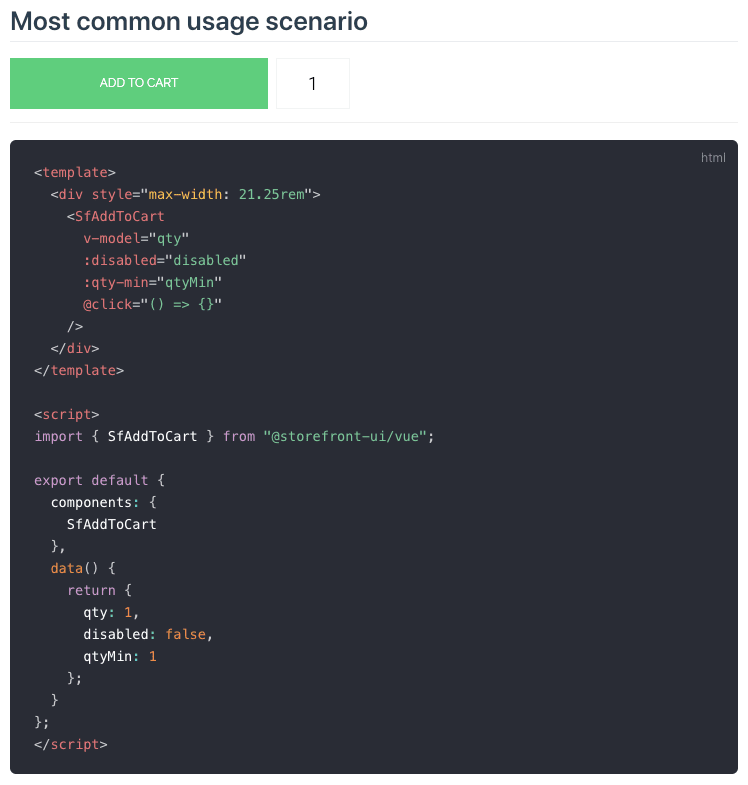 The same generation process takes care of another feature for our docs: For our users' convenience we also include (via an iframe) our demo components from the the Storybook into the component's docs, fully rendered and interactive.

This way, our user have all the information they need for a specific component in one central place, most of it auto-generated (🤖):

As you can see, the only part needed to be written manually for each component is the short description. For that we have the aforementioned markdown file next to each component which is parsed and included at the appropriate spot in the final docs.

Many projects have several sources for their documentation. Often these pieces get copied, extracted and included somewhere else manually. By taking advantage of automation for your docs generation you can accelerate this process and improve your docs' quality and freshness at the same time. Try to identify these sources and consider the best place to store the information once (code? tests? demo files?) and use it for your docs.
Writing helper scripts and robust RegExes to extract, transform and combine everything can be challenging but often an investment into your project's future.

If you have any question ❓, suggestions 💡 or rants 📣 feel free to get in touch!

For more information about Storefront UI, see our repo:

Customization-first, performance-oriented and elegant UI framework for eCommerce (and not only) based on Vue.js and Google Retail UX Playbook. Made with 💚 by Vue Storefront team and contributors.

Create Your Own Vue Application: Authentication with Firebase

Once suspended, quotingeddie will not be able to comment or publish posts until their suspension is removed.

Once unsuspended, quotingeddie will be able to comment and publish posts again.

Once unpublished, all posts by quotingeddie will become hidden and only accessible to themselves.

If quotingeddie is not suspended, they can still re-publish their posts from their dashboard.

Once unpublished, this post will become invisible to the public and only accessible to Eduard Dopler.

Thanks for keeping DEV Community 👩‍💻👨‍💻 safe. Here is what you can do to flag quotingeddie:

Unflagging quotingeddie will restore default visibility to their posts.