If you’ve already started job hunting for your first dev job, I’m sure you’ve experienced this: applying to job after job from sites like LinkedIn, Indeed, Built-In, or Angel List. You’ve probably seen replies like this one: 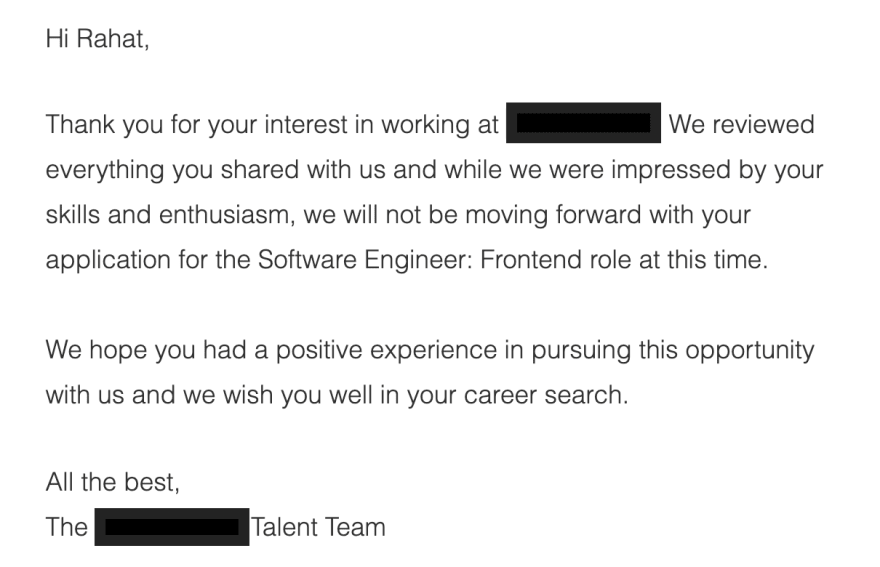 It sucks, you might have spent some time tailoring your resume to have the right keywords, or writing a nice cover letter. If you're doing this for several different applications then you are spending quite a lot of time on this only to get that rejection.

What if there was a way to skip all of that? Screw the tailored resume and cover letter just put in what you know, who you are, and be done with it. The easiest way to get around this and get a foot in the door is via referrals.

You might be thinking "yea ok Rahat easier said than done." It might actually be a lot easier than you think, take it from me a super introverted, social-anxiety ridden human being. I'm going to outline how I was able to successfully get referrals by using my existing network.

Talk to your friends/classmates/distant family.

I added the distant family because I can't imagine working with a close family member, that would be a disaster. Might not be for you though, who knows?

Here's the thing, companies need devs and they also need non-devs. Don't discount your non-dev network, they might be at a company that is hiring for a dev position that you're interested in. I see a lot of people going in straight for developers on the team for referrals and yeah that is good but it's probably easier to get something from someone you know somewhat well. It's easier for them to vouch for you, they know your work ethic, hopefully, on some level. Reach out to people you know and ask them if they want to catch up over coffee. Socially distanced Zoom coffee of course. You can gain some insight into the company and get someone you know to refer you to the position you want.

The pandemic has been a bit of a double-edged sword in regards to conferences. While yes we aren't able to meet in person anymore, or pick up some cool swag or eat overpriced food that doesn't taste all that great. Now we can eat less expensive food we made that still doesn't taste great!

Anyway, it's gotten a bit easier I think to network and meet people in the industry. These events which are now virtual tend to have discord or slack channels where you can interact with folks from all over and learn from them. If you make some friends, and notice I said friends, from these events they might be able to refer you to their own companies. I'll get back to the friends bit later on in the post.

A quick thing you can do before applying for a job is to look the company up on LinkedIn and check out who works there. If you've been networking and making connections, chances are that you might see someone that has a mutual connection with you. If the mutual connection is someone you speak to regularly, ask them for an intro it doesn't hurt! Even if I don't know you directly, if someone I know and trust recommends you then I would be more inclined to give you a referral.

If you've already exhausted the first three things then you've now come to the point where things need to get a little more creative. Piggybacking off of the last point you can always go to LinkedIn and look up people in engineering. You can try reaching out to someone and see if you can initiate a conversation.

Now I can't stress this enough: don't make it about you. I get a number of messages every day from people I don't know and their immediate first message is "can you refer me to your company." Nine out of ten times I ignore this and a lot of other people will too. Here is something I like to say when reaching out to people like this:

Hope you're having a good day/week/whatever. I see you are an engineer at an awesome company. The awesome company looks really interesting because it does insert awesome thing here. I wanted to see if you would be open to having a quick chat regarding your experience there? I'm a newer dev and I believe your insight would be great.

Thanks,
Cool Person in need of a job.

Not exactly those words but hopefully you get the idea. From my experience, devs including myself are willing to help. I'm always down to help a friend, so going back to what I said before, make friends not connections. I know your goal is to get a referral, so does the person you're messaging. It's still nice however to get to know you, especially if I might end up working with you.

I would only suggest applying into the void after you have tried everything here. There are lots of great resources for improving your resume, your LinkedIn, the projects on your GitHub, and those are definitely things that can help. None of those however are quite as effective as getting someone in the company to help you skip the line and get your resume seen by an actual person.

I hope this was helpful! If you're a new dev looking for their first job check out the ebook I am working on:

Build a Product become a Developer

I'm adding some great methodologies and cool tech you can learn to stand out for your job search. Feel free to follow me on Twitter or connect on LinkedIn as well!

Apply to Jobs You Don’t Want

How to excel at take home coding challenge

5 Steps to Tackle The Coding Challenges

Create your ENUM (yes from Java')