Earlier this month I wrote up a blog post demonstrating how to use client-side JavaScript to render a list of your YouTube videos on your site (“Adding Your YouTube Videos to Your Static Site with Vue.js”). This works well and didn’t use any “fancy” JavaScript that would be problematic for older browser (ok technically fetch is a bit modern but you could have replaced that with any other HTTP call) but I was curious to see if there was a way to do within my static site built with Jekyll.

While it would be possible to build a plugin to do HTTP calls to generate output, I didn’t want to pursue this route because, well, Ruby, and then I remembered something Phil Hawksworth had demonstrated a while back. Phil is a developer advocate for Netlify, the service I use to host and deploy this site. I’ve raved about them often on this blog (and on Twitter) so I’m somewhat of a fanboy. Phil wrote up a great article about how he added comments to his static site: Adding a Static Comments System to My Jekyll Build.

His idea was pretty brilliant. He wrote a Gulp script to get his comment data via a simple API, wrote it out to a Jekyll data file, and then when his site is built the data file is used to drive the content for his comments. Netlify lets you specify a build command when deploying and normally I just use jekyll, but by using a Gulp script, you could do a lot more.

Here is a quick example of this in action. I did not do this for my own site as I was a bit chicken, so I simply generated a default new blog for Jekyll at the command line. Next, I wrote my Gulp script. (I haven’t written Gulp scripts in years, so forgive any mistakes. Anything here good is from Phil’s original script.)

The important bit here is the get:videos task. I use a RSS parser from npm called, wait for it, rss-parser, which worked well except it didn’t seem to pick up one of the properties my own code did in the client-side version, specifically videoId which is used in the embed. Luckily I could get it manually as you see here:

I especially like how easy it was to output YAML for Jekyll:

Once it’s written out as a data file then it’s easy to use in a template:

The final step is specify the gulp task in my Netlify settings for my site: 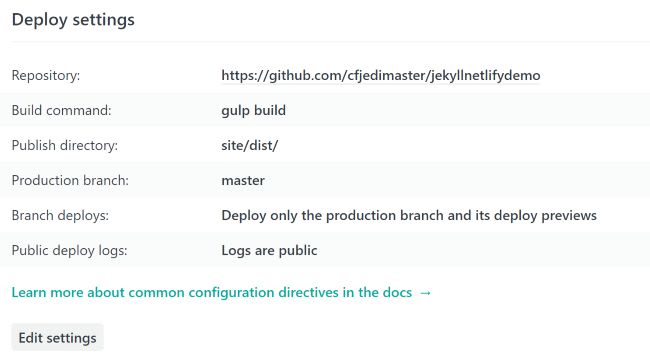 And that’s it! If you want to actually see this, you can view the live site here: https://fervent-beaver-e5dc28.netlify.com/videos/. The source code for this demo is here: https://github.com/cfjedimaster/jekyllnetlifydemo

Thanks for keeping DEV Community safe. Here is what you can do to flag raymondcamden: