Like always, thanks to this training, week 6 was a really nice learning experience. The main focus for week 6 was to create our own custom editor windows for our game project.

Custom editor windows are its own rabbit whole. I was able to learn that there two types of custom editors you can make on unity:

Both of them you can do a lot, will give a brief explanation on what is the difference and then will share on the one I made 😉

EDITORS WINDOWS
Custom editors windows are tools you create to make workflow related tasks simple for all those that are working on a project. These are projected with a unity window that you can access on unity’s window bar.

EDITORS INSPECTORS
This custom inspector editor resembles the inspector window that appears when you select a game object from the editor scene. But you have the opportunity to make your own and add fields that are not available with the default inspectors.

The custom editor that I created was an editor window that allowed a game tester to play the game without interacting with the game itself. 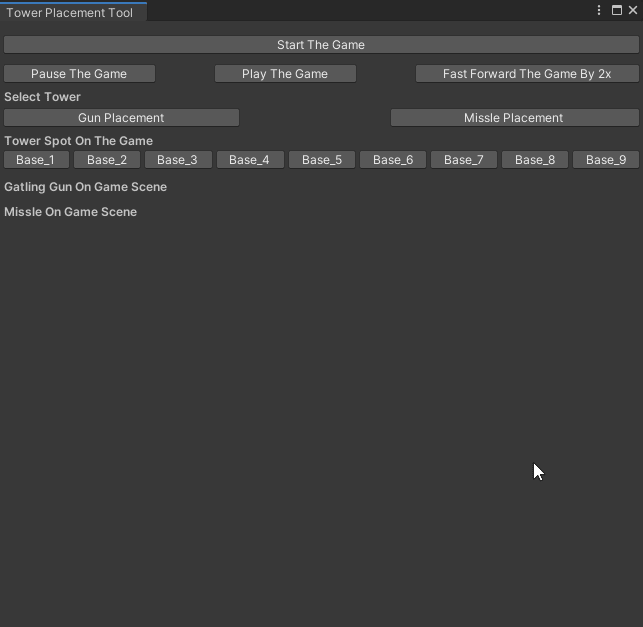 Once you hit play on the editor more options appear that will allow you to start the game, pause, fast forward and play it at normal speed.

When I started to make this custom editor there was a point that I had doubt on myself since I was not clear how to communicate with my scripts; once you learn that is mostly the same way you do it when creating the game and communicating with your script with a simple GetComponent or GameObject.Find then everything start to make sense.

Working with GUI.Layout was a bit confusing; in order to actually make sense in how to use it I decided to look at it like when you're making a website. If you're working with a website and you're using HTML and bootstrap you need to put everything in a proper order to make it work and especially when you want to make a so called layout group that they will react at the same time with a command.

There's still a lot of stuff you can do:
Change the color of the text
Add a pictures
Add a banner
Etc

Custom editors tool is really something else you can make a profit out of. In one of the calls with my instructor he told me that in game dev studios sometimes they ask for specific developers that only focus on tool making and that is actually cool.

Week 6 opened my mind to another side of Unity that I thought I was not going to learn it but once you take it step by step you see a lot of possibilities 🤩.

Next up is week 7