This is part of an ongoing series where I talk about the little things that make Emacs a nice editor. Today's entry: Magit, a Git interface for Emacs.

I'm not much of a Git client person myself. I don't use or particularly like Sourcetree or GitKraken. VS Code and JetBrains IDEs have some nice features, especially when it comes to merging and rebasing, but they're still not quite like Magit.

Magit on its surface isn't all that different from the VS Code Git integration: you can pull and push code, see diffs, read the Git log, and so on. But what makes Magit special is that its integration with Emacs makes it very ergonomic to use.

This is roughly the same as running git status: I see a list of files I've modified and whether they're staged. If I move my cursor down and hit Enter on the file name, it'll take me to the file in question.

I can stage individual files by typing s over the filenames, or staging groups of files by highlighting several and hitting s.

Finally, if I want to make a commit, I type c from the Magit buffer and presented with a number of useful options, not unfamiliar to us Git command-line users: 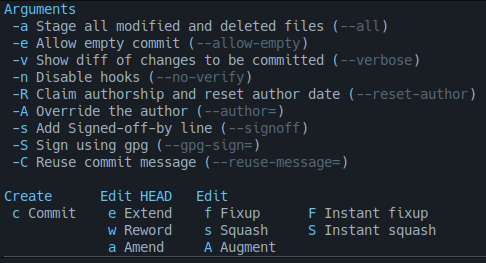 Each one of these arguments are actual Git arguments that will be applied to your Git commit. 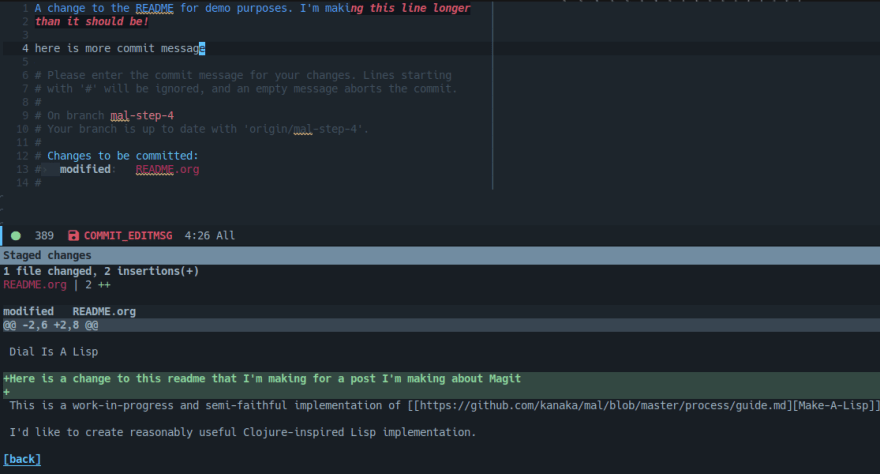 Magit provides a normal text buffer for writing a commit message (with all of the conveniences of Emacs of course). The first line is only supposed to be 50 characters long so Magit will mark any extra text in red. Below is the diff for the commit you're making.

Magit supports not only what appears to be most Git functionality, but you can modify this behavior using actual options that Git gives you. In terms of the interface, Magit makes it very easy to understand what Git commands it'll be running, and in turn passes along greater control to you. If, for example, I wanted to force push this code for some reason, I'd run M-x magit-push (or simply p from a Magit buffer), I'll see this: 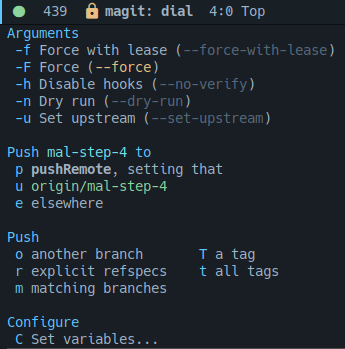 This looks similar to the commit window we saw earlier.

After typing -F I've turned on the --force flag, and Magit will run git push --force instead.

I like Magit because, unlike Sourcetree or even the terminal you don't have to leave the editor to do Git things, and unlike VS Code or IntelliJ, I can perform all these Git actions without ever having to touch the mouse.

Magit can do a lot more than this, of course, but even if this was all it could do it would probably still be my favorite Git client. To me it's yet another reason to use Emacs.

How to make your Python articles more correct and more comprehensible