It's a huge hype to learn how to code these days. And whilst I don't think that _every_one should learn to code I do think it can help kids to think in a logical fashion.

That's why when the Rietveld Lyceum asked me to give a guest lecture I happily said yes.

The Rietveld Lyceum organises guest courses of all kinds for their students. The idea is that students can get an idea of the jobs and functions that exist all around them (I really appreciate this). The assortment of lessons is extremely diverse, one can choose to get a ride with an ambulance, learn how to act, how to farm, how to start a business and much much more. The lesson I added was "Programming". I did not yet know the full program for the lessons but I was planning on teaching them how to build a (very) simple website.

I think the advantage I had with giving this course is that the students chose the subject themselves. If they weren't interested in learning how to code, they wouldn't choose to follow the course.

Developing the first lesson was the hardest. I had no clue of the level of the students. I chose to allow any class (VMBO, HAVO, VWO) to apply for the lesson, but I did not know if there would be a difference in programming level (I've seen better MBO programmers than HBO programmers).

Secondary education, which begins at the age of 12 and, as of 2008, is compulsory until the age of 18, is offered at several levels. The two programmes of general education that lead to higher education are HAVO (five years) and VWO (six years). Pupils are enrolled according to their ability, and although VWO is more rigorous, both HAVO and VWO can be characterized as selective types of secondary education.

I decided to let the first lesson be about learning a few basic HTML-tags, playing around with those and some extra material for students who picked up the simple material quicker.

I first introduced myself, what I was studying, what I was working on (eventually forgot to tell my name) and what we we're going to do during the lessons. I explained that depending on how quickly the material was picked up by the students the course could change over time.

After introducing myself briefly I started explaining why programming was important. I came up with three reasons:

I know there are many, many more reasons as to why coding is important but have you ever met a student who likes to listen to the teacher rattle on about one subject?

What I found very difficult next was to translate my own knowledge about coding to students who had never programmed in their entire lives.

How do I style a page? Just add a style-tag, create a class in CSS and append the class to the HTML-tag you want to style. Sorry. What? 🤔

I wanted to prevent the above from happening.

So, that's why I explained that HTML is nothing more than a file on your computer (or a server). This way I tried to make the, for the students vague, term "HTML" tangible. I showed an example of a very basic HTML-page and explained that when saving the file with the ".html"-extension you created your very first HTML-file. 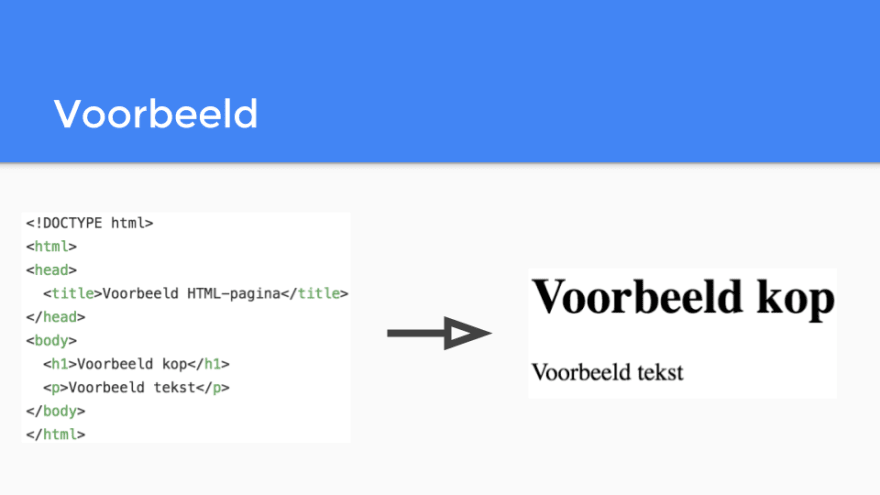 Then, after listing a few basic rules about HTML (closing tags, what tags are, about including the HTML, head and body tag) I decided to throw the students in the deep end.

I created an empty JSFiddle where the basic rules were stated once again and asked the students to create their first HTML. My goal here was to get the students to interact with the code as soon as possible.

Of course, I could first talk about each and every HTML-tag, show half a dozen examples and then let them do it themselves. I think what I would have accomplished then was very bored students.

Results of the first lesson

You might imagine that there were a lot of questions. And this is what I really, really appreciated. The students were eager to learn how to create the next thing. Further on during the lesson I explained how to use the heading-tags (h1, h2, h3, etc), how to add text to a page (p-tag), how to add links to a page (href) and how to add images (img-tag) to the page.

Interested in the presentation of the first lesson? View it here.

The second lesson started with a short repetition of the first lesson. Though, not in depth. Then, I asked the students to perform a small "test". Six questions about HTML, a few were two examples of HTML-code were shown and the students had to choose between those and a few theoretical questions. All the questions were multiple choice.

The reason I took the test was to see if people caught on to the matter. If everyone forgot how to create the page they were (a) not interested or (b) the explanation was lacking.

Judging the from the results I can say the students did catch on. The students learned something a week ago, in 1,5 hour and still remember (almost) everything correctly.

Using Bootstrap also posed some challenges. The students would have to download the framework to their computers, create an HTML file and then they could use the framework.

At this time the students were also making the switch from standalone JSFiddle's to using an editor. I chose Atom because the UI is very straightforward and installing it is very easy. Installing on school computers, however, wasn't as easy as I hoped it to be. The computers were so slow that installing Atom would sometimes take up to 10 minutes, or the computer would stop working and a reboot was required. Eventually we did succeed to install it on all the computers.

Sooner than I realised the course was already over. In the last lesson I wanted to take an exam, clarify a few things about HTML and learn them how to use the Bootstrap navigation bar.

I decided that it would be fun for the students to have a reward for their hard work. That's why I designed an exam for the last lesson.

The exam consisted of 15 questions, the students had 15 minutes for the exam in total and the minimum score was 50%. Also, the exam was designed so that every student got a different exam. To take the exam I used ClassMarker, one of the few exam software which met my requirements. There were ~40 questions, the software picked 15 random questions and presented them to the students. When a student passed the exam they received an e-mail with the score and a certificate. If they failed, they could take the exam again (since the questions would be different and they could not see the correct answer of questions they made).

The results of the exam were consistent with what I expected. Some students scored very, very high (💯%) and some a little less. One student failed the first time but passed the second time with a 7.5 (75%). Although I designed the questions so that there was no difference in difficulty level, of course some questions were tougher.

I also tried to find a balance between explaining and asking students to Google things themselves. You catch on to the matter way more quickly if you are interacting with it, by Googling your way around for example. But sometimes students would just get stuck, they tried to find a solution and just could not. In that case I was more than happy to explain it again. You do not want to become the teacher who never explains anything. 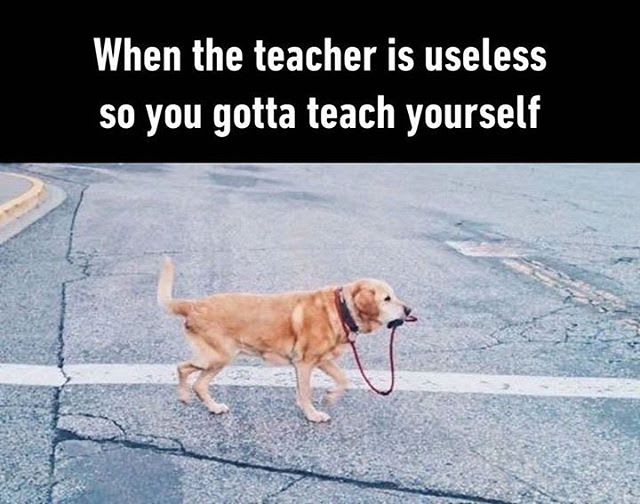 I designed the course to have a lot of hands-on time, you don't learn to code by watching endlessly at slides from the teacher but by doing and researching.

I think the explanation was extensive.> Just great! </answer> ;)> Would be great to have some more lessons so we could end with a real product.> I found it a very enjoyable course, it was well designed and I learned a lot.

Photos published with permission from the students.

Any remarks on this post? Please let me know! Drop me a line at ruben@rubeng.nl