Through Highscalability.com I came across a case study titled "How Rust is Tilde’s Competitive Advantage" in which it is explained how the company saved time and money (the customer's and their own) and created a very robust monitoring agent for their service. They were apparently also able to "retrain" their workforce without spending an excessive amount of time on the training or handling gratuitous complexity.

The first version was in Ruby, sometimes exceeded 100MB in memory occupation, wasn't very robust and created issues for their customers.

The new version was in Rust, its memory occupation was around 8MB, the customers were happier and they were able to deliver more features with the same occupation of memory and stability. 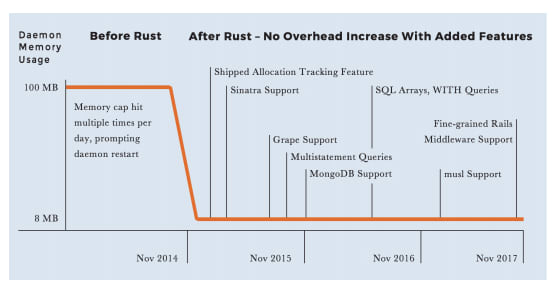 (taken from the case study)

I find this very remarkable.

Not being fluent in either language I would be curious to know if they considered Go at all and if so why they discarded it.

Bonus point: our own @vaidehijoshi is quoted in the case study :-)

You can find it here: "How Rust is Tilde’s Competitive Advantage"

rhymes
Such software as dreams are made on. I mostly rant about performance, unnecessary complexity, privacy and data collection.
How we decreased our memory usage with jemalloc
#rails #performance #changelog
An example of why performance matters (with Python and Rust)
#rust #performance
I broke login for 80k users
#ruby #webdev