Reading my posts you can easily find that there is a topic that cares about me a lot: Dependency management in the development process. There is a feature of the Scala programming language that I liked since the beginning. Without any external library, it is possible to successfully implement vary dependency injection mechanisms. In the past, I wrote about the Cake pattern. Now it's time to talk about dependency injection through the use of implicits. Let this race starts!

I have written many times about this topic, then I will not make a long introduction. To summarize, every time a component needs to send a message to another component, a dependency is defined between them. Components may be packages, classes, functions and so on. Messages are always associated with methods or functions calls. Dependency between two components can have many levels of strength. If you want a complete explanation of the dependency concept, have a look at this post: Dependency.
For sake of completeness, let's give an example of the simplest type of dependency: Association.

An association means that a class is made of references to other classes.

Other than the coupling between components that derives from dependencies, the problem with dependencies is also the process that a component has to take in place to resolve them. Dependencies resolution is a complex problem. To treat it successfully, the best thing to do is to apply the divide et impera principle.

Dependency resolution can be divided into two different tasks: dependencies declarations and resolution. 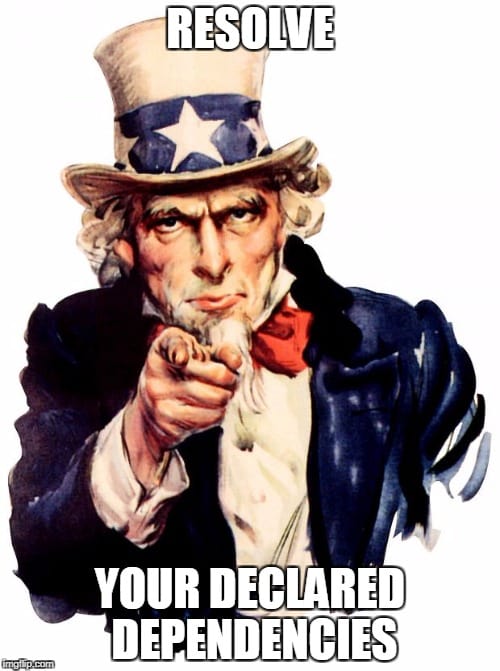 Using constructor injection, a component declares its dependencies as the parameters of its constructor.

In the above example, the class Connection is screaming to everyone that it needs an instance of an ActorSelection class to work properly.

If you want to know which other types of dependency declarations are available, please have a look at the post Resolving your problems with Dependency Injection.

Now that we know how to declare which kinds of objects a component needs to work, we also need a technique to resolve these object. And it's here that the "injection" part comes into play.

In the JVM ecosystem, there are a lot of libraries that implement the injection technique. We have many alternatives, such like the following.

But, Scala is different. The Scala programming language has a richer semantic that allows implementing dependency injection mechanisms without the need of any kind of external libraries. As you we will see in a moment, this technique applies both to classes and to functions. That's awesome!

In the past, I wrote about the Cake Pattern, which implements dependency resolution using traits and self-type. This time I want to write about a dependency injection mechanisms that uses two other features of Scala, function currying, and implicits.

Let's take for example a function that takes two arguments:

We can refactor this function into a new one, that takes only one parameter and returns a new function.

To multiply two integers you have to call the last function in the following way.

In mathematics and computer science, currying is the technique of translating the evaluation of a function that takes multiple arguments (or a tuple of arguments) into evaluating a sequence of functions, each with a single argument.

There is a shortcut for defining such curried function in Scala:

The languages save us from defining a lot of intermediate functions, giving us some vanilla-flavored syntactic sugar.

I suppose that you are asking why are we talking about currying instead of dependency injection. Be patient. 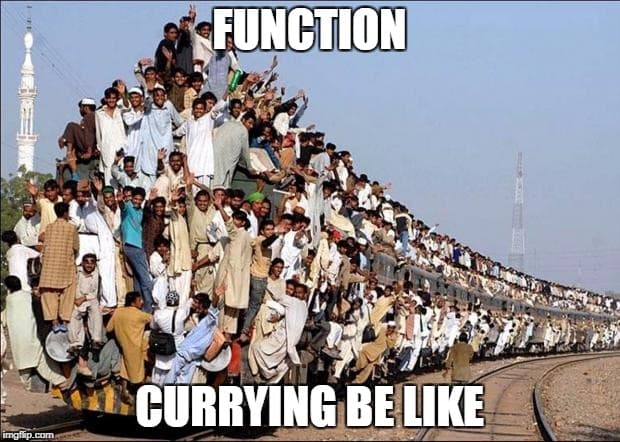 Implicits are another awesome feature of the Scala programming language. Hated by someone and feared by most, implicits can be applied to resolve a lot of problems, from automatic conversion between two types to the automatic resolution of dependencies. What we are going to explain is how implicit parameters work in Scala.

The parameters of a function (or a method) can be marked with the keyword implicit. In this case, the compiler will automagically look for a value to supply to these parameters. Here is a simple example of a function using an implicit parameter, taken directly from the Scala SDK:

In the above example, the parameter execctx of method apply is automatically resolved and provided by the compiler to the program. How does the Scala compiler know how to resolve implicit parameters? Compiler search for an object that has the same type of an implicit parameter and that is declared using the word implicit. In the case of execctx in the object scala.concurrent.ExecutionContext.Implicits is defined the constant global.

During implicits resolution, the compiler search for var/val/def that are available in the same scope of the function that as some parameters marked as implicit.

Implicit resolution is also one of the reasons why Scala compiler is so slow. In fact, implicits resolution has not any impact on runtime performances, as it is done completely at compile time. For a more detailed explanation on implicit resolution, have a look at Implicit Parameter Resolution 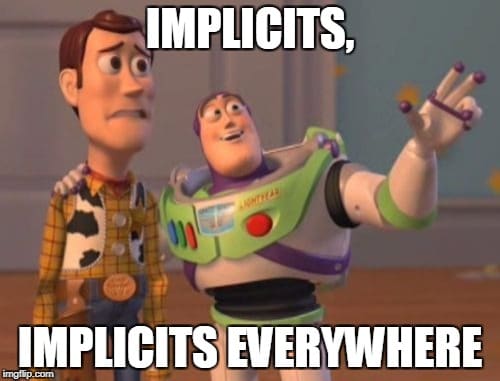 Until now, we learned how to currying a function; We learned how implicits work in Scala. It's time to put them all together.

As you probably already understood, we can use implicits to instruct the compiler to automatically resolve components dependencies. Let's start from types. We have already learned that dependencies of a class should be declared in its constructor. We learned that for every parameter of a function or method that is marked as implicit, the compiler search for an object of the same type in the appropriate scope.

We have declared also a UserService trait over the class, such that clients of this class have not to deal with the boilerplate code of implicits.

We have mainly two possibilities to provide this information to the compiler. The first is to use a configuration trait to mix with every class that declares an implicit dependency.

We chose to mix the trait into the companion object of the class to avoid replication of the instances of the variable repository.

The second approach is to use a package object placed in the same package of the class UserController.

Using the latter approach, the definition of the object UserController is not polluted by any external and strange extensions. The drawback is that it becomes harder to trace how each implicit parameter is resolved by the compiler. 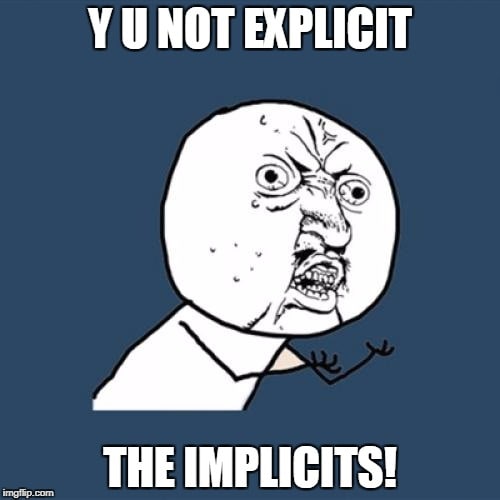 Easy enough! We have just implemented dependency injection in Scala using implicits! Wow! But, wait: why did we introduce also function curring? We did not use currying by now.

To clearly divide the inputs of the functions and the declaration of dependencies, avoiding polluting of the signature, we can use currying.

Finally, to let the compiler to resolve automatically the dependencies, we can use implicits, as we did for the object-oriented case. This technique is called implicit parameter.

"This is the end, my only friend, the end". We just analyzed the techniques we can use to implement natively dependency injection in Scala: Implicits. We analyzed in details the features of the language that helps us to achieve the goal: implicits and function currying. We showed an example both using object-oriented programming and functional programming. Well.

Different from the Cake Pattern, implicits gives us a mechanism to implement dependency injection that is concise and sexy.

Dependencies are resolved at compile-time, you write less code, there is no boilerplate, classes are loosely coupled, everything is extendable yet still typesafe.

On the other end, implicits resolution can become hard to understand an maintain very quickly.

It is common to use package objects with implicits, so there is no way to eyeball that this small import on top of a file feeds several functions calls with implicit variables. Even worse, it is impossible to understand from a code that this particular function call needs implicits.

As for any other technique in programming, we always have to compare pros and cons. In my opinion, if using properly, implicits offers more pros than cons. What do you think? Anybody with some bad story about implicits out of there? Cheers.

Is React or Angular Better?

Once unpublished, this post will become invisible to the public and only accessible to Riccardo Cardin.

Thanks for keeping DEV Community 👩‍💻👨‍💻 safe. Here is what you can do to flag riccardo_cardin:

Unflagging riccardo_cardin will restore default visibility to their posts.