The backdrop-filter CSS property allows you to enable cool graphical effects, such as blurring, to the area behind an element. It's the easiest way to make blurry backgrounds which are more commonly seen in recent web design projects.

However, there was one gimmick: this feature was only supported in Safari, classic Microsoft Edge (that one with EdgeHTML engine, not the preview) and unofficially in Chromium-based browsers by enabling a special flag. Because none of major browsers (I mean Chrome and Firefox) supported this feature, only about 15% of Internet users could see backdrop-filter in action. Plus the beta Chromium rendering of this feature was buggy and slowed down the whole page.

But things have just changed.

According to caniuse.com, the backdrop-filter feature is finally being officially supported in Chrome starting from version 76, which is currently at preview stage. It should become stable in a few weeks. Other Chromium-based browsers, such as Chromium Edge, Opera etc. should introduce it later (or have introduced).

That means after Chrome 76 goes stable, you will be able to use backdrop-filter without worrying that almost nobody won't see it in action - unless your primary target are Firefox users. That browser hasn't implemented this feature in any part yet 😢.

I've tested backdrop-filter on Chromium Edge and it works flawlessy. 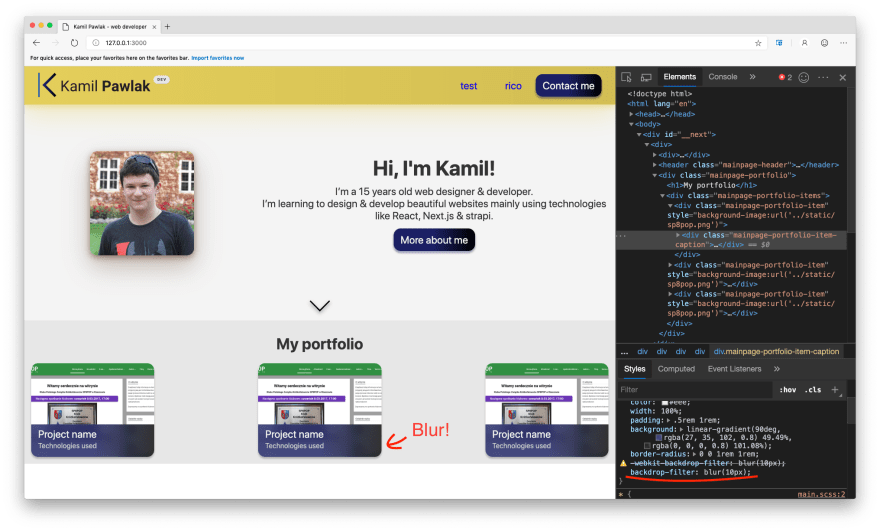 After these support changes, here's an example on how to use backdrop-filter in your CSS:

I think that the wider browser adoption of backdrop-filter property will lead to even more stunning website designs, especially those that utilize some kind of background blurring. Developers can use it without worrying that majority of people won't see it live because their browser doesn't support it. Feel free to use it. Happy coding 👨🏻‍💻

CSS Flexbox (Flexgrid) and how to use it quick ?

Modifying an SVG path with CSS

Once suspended, ricoet22 will not be able to comment or publish posts until their suspension is removed.

Once unsuspended, ricoet22 will be able to comment and publish posts again.

Once unpublished, all posts by ricoet22 will become hidden and only accessible to themselves.

If ricoet22 is not suspended, they can still re-publish their posts from their dashboard.

Once unpublished, this post will become invisible to the public and only accessible to Kamil Pawlak.

Thanks for keeping DEV Community 👩‍💻👨‍💻 safe. Here is what you can do to flag ricoet22:

Unflagging ricoet22 will restore default visibility to their posts.