It's not that I dread build failures or compiler warnings - I dread the wait.

My current Rust project takes about a minute to build on my laptop. It's not long enough to do something meaningful, like read HackerNews, but is long enough to make it feel agonizingly boring. If I don't have the money for a faster laptop, maybe I could build a really fast Rust development server on AWS?

A friend of mine is using an Intel NUC bare-bones computer as his local development server. It is quite powerful for its tiny size and will outperform my ageing Surface by a wide margin. We'll use the cost of a new NUC and the performance of my Surface as the baseline to compare different options.

Somehow I find it painful to part with $1,000 for a gadget I may not need in a few months, even if it's as cute as a NUC. Let's see what an EC2 instance may cost.

The average compilation time proved that the defining factor is the number of vCPUs (cores) - the more the better. Factors like extra memory, EBS optimization or network throughput didn't make any difference. I did use Unlimited option (u in t2.micro/u) for some tests.

Surprisingly, the new ARM-based instances (a1.xlarge, c6g.xlarge) were slower than x86, but provided more value. I also ran into several toolchain issues with them. It may be a bit too early to consider them for this particular application.

Another unexpected result was that t2.micro has the lowest cost per compilation. It is too slow for real-time builds, but it gets there eventually. I would use it for a build server in a CI/CD pipeline where the build duration is not critical.

The time saved per build is relative to the size of the build. The next graph shows the ratio of improvement with EC2 time compared to my current Surface/VSCode/WSL2/Rust setup. I may be saving 15s per build on this test project, but some builds may run into minutes, so the higher the ratio the more time it will save. 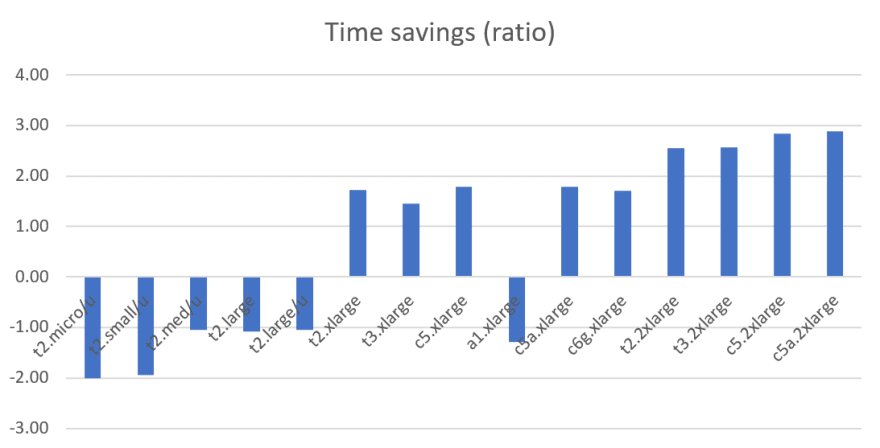 And finally, consider some measure of value vs the monthly cost. It looks like c5-types provide the best value for money for real-time Rust builds. I arbitrary defined value = time_saving_ratio/cost_per_build, which can be simplified to value = 1/(instance_cost * avg_compilation_time^2).

I would go with c5a.2xlarge for larger builds to get 2.89x improvement or c5a.xlarge for smaller ones with 1.79x. They seem to be the optimal choice between speed, value and what I am prepared to pay for it.

The rest of the post is a detailed step by step guide of setting up VSCode with a Rust development server on EC2.

The primary purpose of this development environment is building AWS Lambda functions. That adds a few extra steps with x86_64-unknown-linux-musl target and other specifics.

This section assumes that you already know how to configure a security group, launch an instance and connect to it. Let's get started ...

You may need to stop the process to troubleshoot if you get any errors. I included some links that helped me along the way.

We need to prepare the environment to easily start/stop the instance and deploy test Lambdas.

This is StartStopDevEC2 policy for starting your Rust EC2 instance from inside VSCode:

This is UpdateOrInvokeLambda policy for updating Lambda function code from your EC2:

Launch the EC2 instance in the AWS location closest to you to minimize the network latency. Lambdas can be deployed in a different location with the rest of your infra - the latency from the Lambda to you is not critical. For me, the nearest AWS data centre is in Sydney (ap-southeast-2) and my Lambdas live in us-east-1.

Starting the instance: press Ctrl+Shift+R and select Start vscode-syd VM. This shortcut works only if your VSCode is running locally. Give it a minute or so for the instance to initialize before connecting to it.

Stopping the instance: disconnect all SSH sessions and the instance will be stopped 1 hr later by the EC2 alarm described in AWS Config section. You can add stop-instances custom command if you want to stop it immediately.

Connecting to the EC2 instance from VSCode

Learn more about remote SSH connections in VSCode from https://code.visualstudio.com/docs/remote/ssh.

Setting up Rust for VSCode

If you are still running on that t2.micro instance it is time to upgrade to c5.xlarge and build the demo project for deployment to AWS Lambda:

Push the code to AWS Lambda. The Lambda must already exist for update-function-code command to work. Replace the region and function name with your IDs.

I noticed that IntelliSense within VSCode stops working from time to time. If that happens to you, search the command pallet for Rust Analyzer:Restart Server. It should start picking up errors and expanding the syntax as soon as your Rust Analyzer restarted.

Comments with questions, corrections or suggestions are very welcome.

What tools do you use?