It can often happen that you did something wrong by using GIT: you gave the wrong commit message, created too few or too many commits, you have commits in the wrong order or with the wrong content. To change such things you have to change history in GIT. Interactive rebase in GIT is an efficient and powerful tool for that.

The idea of interactive rebase

To change the last 3 commits before the current HEAD type git rebase --interactive HEAD~3 or git rebase --interactive hash_of_the_third_commit_after_head. Pay attention, the third commit after HEAD is practically the fourth commit in git log, since the first is the HEAD itself. Instead of --interactive you can also type -i. This command will open your default editor and list your last three commits. The format is something like:

The very first thing you can do is to change the order of the commits in this file. It is pretty straight-forward, just change to order of the lines

Other than that you have the following options with each of the commits:

You should just write the right keyword or its abbreviation (in brackets) before he commit id. 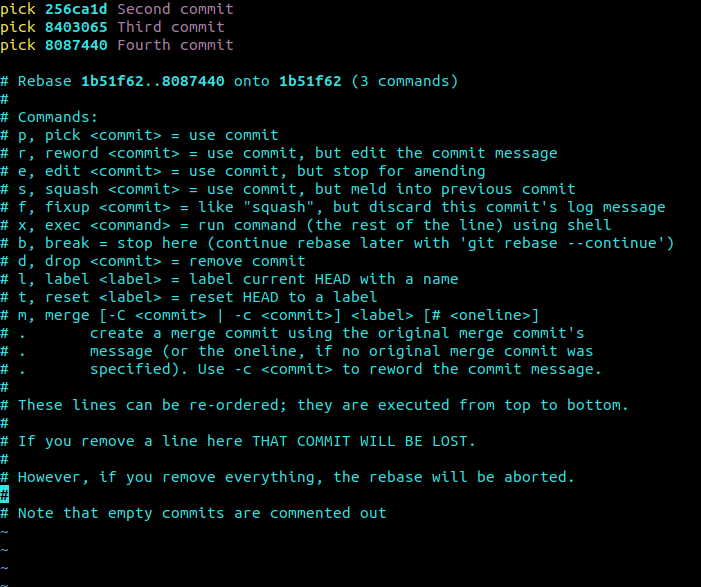 Here is a small collection of real life scenarios which can be resolved by interactive rebase.

There’s a huge chance that you have to resolve some rebase conflicts, in this case change them, add the changed file with calling git add and type git rebase --continue at the end. Since the rebasing is commit based it can be that you have to fix similar conflicts in the same file multiple times.

Get rid of unnecessary commits

It can happen, that you would like to remove a commit with its content, do the following:

That’s it, you removed the unnecessary commits with all their content.

One commit instead of multiple commits

Sometimes you created too many simple commits and you would like to make your history more clean with less commits. You can simply merge the content of multiple commits into one.

What to do if you want to change the commit message of an older commit?

How to change the content of an older commit?

How to split an already existing commit?

In my view interactive rebasing in git is a very powerful option which can make several scenarios easier and faster. But in order to use it in an efficient way you have to really know how it works.

Why you don't have to commit node_modules folder

How to change the URI (URL) for a remote Git repository?