I've been a full-time Developer Advocate for nearly 1.5 years now, and have learnt lots along the way. The stuff I've learnt about being an advocate I've written about elsewhere (here/here/here); today I want to write about something that's just as important: staying sane and looking after yourself whilst on the road. This is also tangentially related to another of my favourite posts that I've written: Travelling for Work, with Kids at Home.

I love my job as a Developer Advocate, I honestly do. It's a great combination of a lot of the things I enjoy doing. But I've come to realise over the months that there are quite a lot of things that can contribute to one getting frustrated with it and work in general, being tired, and at some point probably burning out.

One of the biggest things that I've had to reconcile in my mind is the hours in the day and how I think about them. My first ten years of employment were just 'normal' office jobs, and if in that 9-5 office job you take a three-hour lunch break, most people would feel that they 'owed' some time back for that. Whether because your manager actually monitors your time (ouch) or simply you have work to get done that wasn't getting done in that time, you may well end up working late or starting early. Quid pro quo, right?

The problem with this when you're on the road is that your day is turned on its head. This week I did four meetups, in four cities, across three countries. I got up at 04:15 to get my first flight on Monday and after the meetup that night got to bed at about 23:00. So on the 'debit' side of the ledger is a crap-ton of hours spent travelling, let alone actually presenting and advocating. But for a long time I still felt whilst on the road that I should be up, breakfasted, and ready to log on to work at 09:00 for a full working day---plus meetup in the evening, and that not doing so was cheating.

Guess what? As a developer advocate on the road shit doesn't work like that (or at least, hopefully doesn't if you've got a half-decent boss). Sure, you need to be available to take calls and get work done, but you also need to look after yourself. No point burning yourself out because then you'll be no use for anything---including doing the meetup or conference for which you've travelled all that way. So get your work done, but be realistic with yourself (and others asking for deadlines whilst you're on the road) what you can (and should) get done during that time.

All of this is a long winded way of saying look the f**k after yourself, and don't sweat about counting the hours. Stuff balances out in the end. Most people are professional and conscientious and will get the work done.

There's another aspect, related to the above, as David Allen points out:

Hey how's this for a weird meta-skill that takes practice and is easy to get wrong: realize when you're too tired to work, and don't do it. At a certain state you can only drive yourself nuts, but can't actually get anything meaningful done.

A few years ago, I realised that doing zero exercise, and enjoying beer and good food, was probably putting me on the wrong side of the statistical likelihood of some health problems. What I'd got away with in my twenties was surely going to come home to roost in my late thirties and (now) early forties. So I started running, using the Couch to 5k programme. This year I did my first half-marathon, which I never thought I'd have done when I started a few years ago. I am no athlete, but I found that much to my surprise I really enjoy running. It's a chance to switch off and clear my head. When I'm working from home, I try to run before breakfast and I find I'm less grumpy with my kids. When I'm working away, it's a great way to see a little bit of the place I'm visiting---and to also force myself to do something other than work.

Lots of work travel, as glamorous as it may sound, is actually airport → hotel → conference → hotel → airport. "You're going to Rome next week?! OMG I've always wanted to go there!!". Yeah, me too. And I still do. Because, technically I've been to Rome. But I've not actually been to Rome. Running is a great way to sneak in just a little bit of sight-seeing, and if you do it early morning before heading to the airport you find places are deserted, and you get some nice photos, if that's your kind of thing. Check out my Strava feed and Twitter feed for some of the runs I've done. 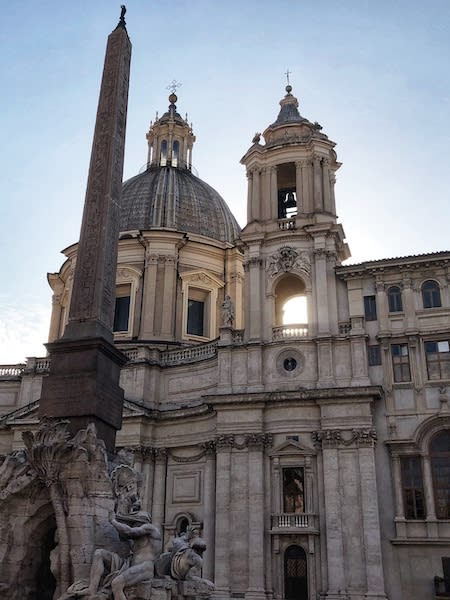 This one is a new discovery for me. When I'm on the road, it's lonely. Which may seem ironic since you're often speaking to large crowds of people. But contact that counts for something, whether it's family or close friends, is limited in supply and usually on the end of a phone or video call (and timezones often hamper that too). So it's lonely, and where do we go for human interaction in this day and age? Our phones, of course!

Twitter, Slack, Email, Instagram, Strava, back to Twitter, check Instagram again... it has belatedly dawned on me that this is a really shitty way to occupy my time when travelling, particularly at mealtimes. So I've taken to bringing my Kindle, some good books that I want to read (not ones that I feel I ought to read or want to have read), and I make myself read that at a mealtime. Eating alone whilst on the road I got used to pretty quickly when I started travelling for work years ago, but I'd often just graze on my phone.

If you're looking for inspiration on what to read, I am thoroughly enjoying working my way through Robert Harris' books at the moment, including Munich, Enigma, and Imperium. The key for me here is that it has to be something I want to pick up.

There is no way you can productively make use of all the theoretical time available to you when travelling. 30 minutes between train connections here, an hour in an airline lounge there, 20 minutes in a taxi there---these are all great for catching up on emails, but they suck for trying to get chunks of work done that require contiguous blocks of time. People work differently, but I found myself just getting frustrated as hell that I wasn't getting things ticked off my task list when I had "all day" available to me in the hours before an evening meetup. But unless you are actually sat in a hotel room or a coffee shop for solid hours of time, it just doesn't count the same as normal hours sat in your office or working at home, and you need to be realistic with yourself about what you'll get done.

Don't feel bad about spending some of the time not doing anything. Or wandering around a nearby park. Or playing a game on your phone (SoulKnight rocks!). Or visiting a museum. One of the most valuable few hours I've spent recently was at the NS-Dokumentationszentrum in Münich which I came across just by chance, and I'm so glad that I did.

Travelling screws with your body. You're sleeping at different times, not in your own bed, eating conference food, drinking conference coffee 🤮or squatting at coffee shops. It's too easy to get to the end of the day and realise that you've not actually drunk any water, only coffee and beer. With the best will-power in the world, whilst I know I should not rely on the caffeine to keep me going and a beer to relax me...I still do 🤷. So to try and keep it vaguely checked I try to instead make it a habit of ordering a water with every drink. At least that way I'm taking in some water, rather than none.

One of the best resources I've found is the DevRel Slack community. These are folk many of whom are doing the exact same thing and so can empathise fully. Sometimes you just want to get off your chest about a crappy connection at an airport, othertimes you'll get great discussions about all aspects of DevRel. It's a friendly community and a great resource.

My best resources for learning web3 are buildspace and cryptozombies.