I use Plex to manage and view all my movies, tv shows and music located at my personal home storage system. It consists of two programs:

This normally works really well. But one evening when my girlfriend and I wanted to watch a movie, it suddenly didn’t want to start. Instead, this really helpful error message appeared on the tv screen: 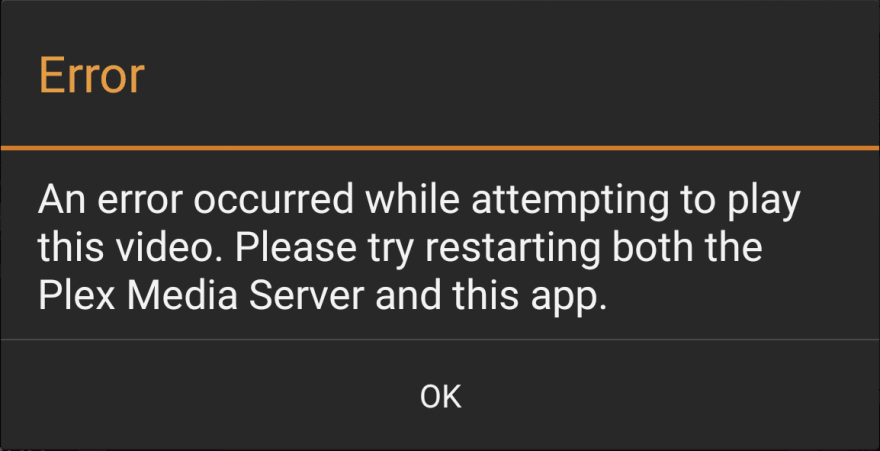 This was a new one for us. I knew, if I didn’t fix this right now, the evening would be ruined!

So on to fixing this. First idea: reboot everything. But that did not help, the movie still didn’t play. I started to think about what the problem could be. My first thought was that the movie was somehow corrupt or has some audio or video codecs that aren’t supported. But I quickly dismissed this idea because I knew that this movie played fine the first time I did a test run with it. So I tried to run something else and noticed, that the shows apparently seemed to work!

Some minutes had already passed and before letting this evening go to waste and possibly anger my girlfriend, I decided to instead watch the still working tv show with her.

Fast forward the next day, the movie was still not playing. The tv show was working. Trying other movies I noticed that no movies at all were playing! So I began searching for clues on the internet. One of the first things people said was to make sure that I had up-to-date versions of the Plex media server and the Android app. They were and I couldn’t remember that I updated the software recently.

After some more searching I found this thread on Reddit:

It seemed to suggest that my temporary file space was not big enough:

It’s because you don’t have enough temp space to transcode the entire file. It’s a check that was just added a couple of updates ago. In the settings, you can point the temp transcode folder to a drive with more space (I pointed mine to a new share on my NAS) and everything should be fine again.

The setting can be found here:

This sounded exactly like the problem I was having! But checking at the server showed that there was plenty of temp-space available! At this point, I was already searching for the error for more than an hour and thought about giving up and reinstalling the server-side of Plex. But this would have meant reindexing my whole media collection which would probably last some hours.

I decided to postpone this and went back to the living room, see if reinstalling the Android app (again) would work or if any magic happened in the meantime that would make the movies work again.

Of course reinstalling didn’t help and it did not work by itself either. After flicking through the various options in the Android app I saw the following settings: 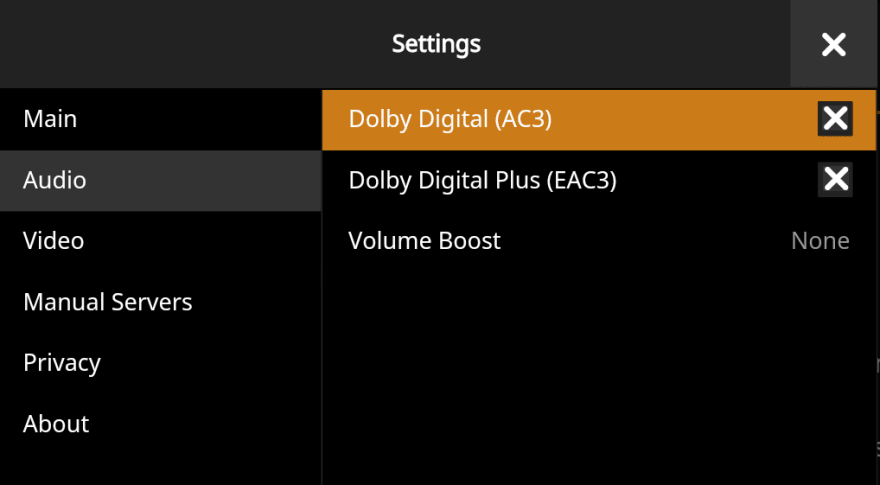 Then I suddenly remembered that I once removed these both checkmarks and now they were there again! I unchecked both and all my movies were playable again. I went to the App Store and checked when the last update of the Plex app happened. Indeed it was some days ago. Seems like this update reset the app settings.

So if you ever find yourself in the same situation, check the following:

Once suspended, rndmh3ro will not be able to comment or publish posts until their suspension is removed.

Once unsuspended, rndmh3ro will be able to comment and publish posts again.

Once unpublished, all posts by rndmh3ro will become hidden and only accessible to themselves.

If rndmh3ro is not suspended, they can still re-publish their posts from their dashboard.

Once unpublished, this post will become invisible to the public and only accessible to rndmh3ro.

Thanks for keeping DEV Community 👩‍💻👨‍💻 safe. Here is what you can do to flag rndmh3ro:

Unflagging rndmh3ro will restore default visibility to their posts.