This post is out of date. The cucumber crate version used here is obsolete. Fortunately, the new version is not only better, but also easier to use and has excellent documentation, which you can find here.

Cucumber is a tool for behavior-driven development (BDD) that uses a language called Gherkin to specify test scenarios with a syntax that is very close to natural language, using key-words such as When and Then.

Here I will not explain the particularities of neither Cucumber nor Gherkin. My goal is to just show you how to use them with Rust. If you know nothing about them, I recommend you to:

That being said, the examples I am using are elementary, so you should have no problem following along even if you have never seen Cucumber and Gherkin before.

The code used in this tutorial can be found here.

To focus on how to use Cucumber with Rust, I decided to code a dummy multiplication function, so you don't get distracted by the idiosyncrasies of a particular project.

Then, remove the mod tests from lib.rs and code this:

And that's all for lib.rs.

Setting up the manifest

The manifest (Cargo.toml) require these entries:

In [dependencies] we have tokio, which is an async runtime required to work with cucumber-rust (even if you are not testing anything async). You may use another runtime.

And in [dev-dependencies] we have cucumber_rust, the star of this show.

We have to create a couple of files:

At the end, we have this:

Coding the test with Gherkin

Here we have a context set by Given, an event described by When and an expected result expressed by Then.

Although my purpose is not to teach Cucumber, I have to say that this is not a good BDD scenario. Not so much because it is dead simple, but because it is a unit test in disguise. I have, nevertheless, kept it here because it has the virtue of making things crystal clear regarding how we are going to interpret this scenario with Rust. For best practices, check this.

Handle the scenario with Rust

From now on, we stick with Rust.

The first thing we need is a World, an object that will hold the state of our test during execution.

For now, we created an enum named MyWorld that will be our "World object", holding the data between steps. Init is its initial value.

The MyWorld object implements the trait World provided by the cucumber_rust, which in turn gives us the methods to map the steps (Given, When, Then, etc.).

The Error type is a requirement from this trait, as is the attribute #[async_trait(?Send)].

Now it is time to actually code the interpreter. I will explain the code block by block, so it might be useful to also have the complete code open, so you don't lose sight of the whole picture.

After declaring the mod, we created our builder, a Steps struct that will store our steps.

The crate cucumber_rust provides three variations for the main Gherkin prefixes (Given, When, Then):

I am using given_regex() to parse the two numbers. Remember that in operations.feature I specified this:

When you call a step function such as given_regex() you get a closure containing the World object and a Context. The latter have a field called matches that is a Vec<String> containing the regex matches (if you're not using a _regex step, the Vector will be empty). In this case, as I am using regex, it has three values:

This is the regex "normal" behavior. If you are not familiar with regex, this is a good intro (thank you YouTube for holding my watch history for so long).

With these values, I return my World object now set as Input.

Before we move to when, I have two quick remarks to make:

This one is very straightforward. I use match to get the enum inner value, multiply both inputs and return the World object with a new value.

The function mult is ratter useless, but it has a role to play here: to show you how to import what we declared within the library crate.

Here I use regex again to compare the value that was calculated in the Then step with the value provided by Gherkin (which is, as I said, a very suspicious BDD scenario).

At the very end, I return builder.

After the mod, we declare our main function:

That's it! To test it, all you have to do is to run

Rust will run the main function found in the file specified in the manifest: cucumber.rs. This is the result. 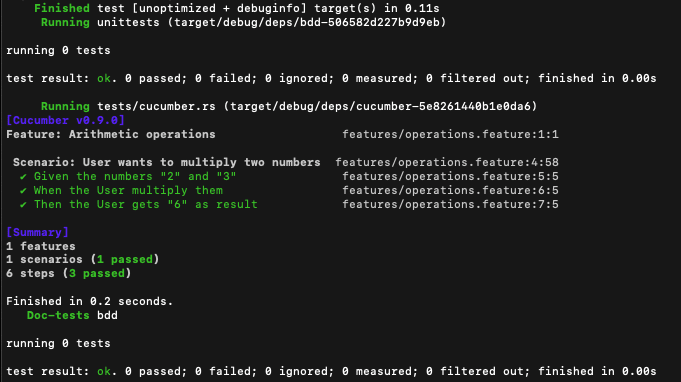 I recommend you to mess with the values and run the tests, so you can see how the errors are captured.

Much more can be done with cucumber_rust. I hope this tutorial helps you get started with it.

Once unpublished, this post will become invisible to the public and only accessible to Roger Torres (he/him/ele).

Thanks for keeping DEV Community safe. Here is what you can do to flag rogertorres:

Unflagging rogertorres will restore default visibility to their posts.