The result is a great local development experience via AWS SAM combined with the power of Terraform as the glue and as a general purpose solution for other AWS service deployments.

The creation of this combination came out of necessity working together with developers that are not cloud native developers. Our initial solution was to emulate the online environment by using command line tooling that would execute a proxy which then executes the Lambda code. This resulted in some big problems down the line (hint, hard to debug!).

The solution here is to avoid self created offline development environments, AWS SAM is directly supported and developed by the good people of Amazon themselves. Hence, we've started using AWS SAM because of its use of Docker containers to emulate AWS services and it provides the means to easily create the relevant Service events (e.g. events for SNS, API Gateway, etc.) for AWS Lambda local testing.

In this article I'll discuss the background and the solution I created to successfully integrate Terraform deployments with AWS SAM.

There are two repositories on Github that demonstrate my solution, please feel free to review these here:

First off, let's start with an overview of the solution and where the responsibilities have been defined for both Terraform and AWS SAM.

The idea behind this setup is to take advantage of a couple of key features offered by AWS SAM;

Then have the rest of the application be defined by Terraform that can do this reliably and in a DRY (Don't Repeat Yourself) structure.

With that said, AWS SAM only defines the API definition (API Gateway), the AWS Lambda functions, and Lambda CloudWatch Alarms for CodeDeploy. 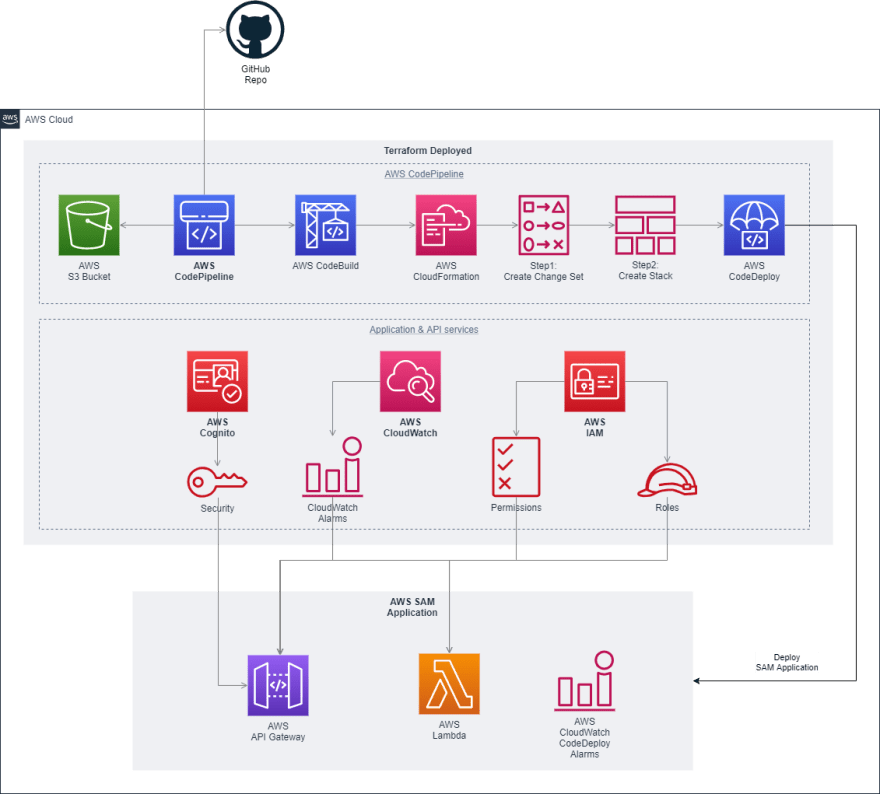 Terraform is an all purpose infrastructure as code tool suite that can create infrastructure on a number of Cloud vendors. With its big support base, and the very useful modules system, it's relatively straightforward to deploy large infrastructures to AWS.

With that said, what does Terraform deploy in this particular configuration with AWS SAM?

Besides the complete AWS CodePipeline, as shown in the diagram above, it manages all "fringe" AWS services in this code example. From left to right:

For your own projects this would mean; services like SQS queues, Databases, S3 buckets etc. would all be created by Terraform and referenced in the AWS SAM template.

To deploy AWS SAM, we use AWS CodePipeline to setup our automated CI/CD pipeline. It consists of the following stages:

Each stage can result in artifacts that need to cary over to the next stage in the pipeline, that's where the artifact_store configuration comes in.

To get the source, the GitHub credentials (OAuthToken), and connection information (Owner, Repo, and Branch) needs to be provided.

PollForSourceChanges if set to true, will start the pipeline on every push to the configured Branch.

The lifecycle ignore_changes configuration is applied because of a bug with the OAuthToken parameter. See this issue for more information.

The build stage is pretty self explanatory.

What's more interesting is the buildspec file which defines the steps to produce our artifacts. The configuration.json file contains all the properties that are defined in the AWS SAM template. That way we can configure this run for each environment (dev, test, prod) individually with different settings.

Here we get to the meat and potatoes of the pipeline, the deployment stage.

There are two steps it needs to undergo:

Here we create the CloudFormation Change set on an existing stack or a new stack, which means it will "calculate" the difference and applies the changes necessary to the related services in your AWS account.

For this we need an IAM Role with the appropriate permissions (role_arn or RoleArn, someone at Terraform will eventually find out which one ;) )

The template is a result from our build process, hence build::packaged.yaml. Then the build::configuration.json file is in the Github repo that contains the relevant parameters for deployment of our stack.

Please note there's an inconsistency in how Terraform deploys action CreateChangeSet. By just setting the role_arn in the action block, the RoleARN in the configuration block gets set to null. You need to set the RoleARN parameter to avoid this. I've reported this issue to the official GitHub repo.

If you want to find out which configuration block parameters are required in defining CodePipeline stages and actions, look at this official documentation page for CodePipeline, and in this case the CloudFormation action reference in particular.

To run your own AWS CodePipeline for your AWS SAM integration, I've made this Terraform module available here:

With CloudWatch the main purpose is monitoring, so I've created monitoring for;

If you want to create CloudWatch Alarms for API Gateway endpoints and/or AWS Lambda, you can use my Terraform module to quickly set them up:

To setup the required policies and permissions, the following two things are done.

This creates a role based off of policy documents like shown below. Then this ARN gets applied in the AWS SAM template and that function can subsequently publish a message to an SNS topic for instance.

We store this json and then call it with my module like show here.

The role_vars get filled in the json template automatically upon inclusion via the data "template_file" Terraform function called within that IAM module. See the official documentation on this functionality here.

To allow your API Gateway to execute an integrated AWS Lambda function, you have to give it permission like so:

This lambda:InvokeFunction action tells the principle apigateway.amazonaws.com that the source_arn is allowed to execute the function_name. You can apply this similarly for the SNS service (sns.amazonaws.com) or any other service that can integrate with AWS Lambda.

The actual integration of the AWS Lambda with the endpoint is defined in the OpenAPI document that is included in the AWS SAM repository. With these two together, you have a functioning integration.

Alright so we know what the Terraform parts do, how about AWS SAM?

Check my example repository here if you'd like to go in-depth.

When the AWS CodePipeline is finished it will deploy, from left to right:

Then there are a few artifacts in this repo that control the integration with Terraform and define the AWS SAM stack.

As you can tell from the official documents on the AWS SAM template anatomy, it resembles CloudFormation for the most part and it introduces a few special Resources to more quickly create serverless applications.

Rather than going over every bit of detail, I'll focus on two features that make creating templates much less painful. After which I'll discuss how to get local development up and running and show a bit of the CodeDeploy goodness that comes along with AWS SAM applications.

With Globals you have the ability to apply configuration across all individually defined resources at once. For example:

This means that each function declared under Resources will use the Runtime NodeJS version 12 and they will get the same Tags applied. This saves a lot of space configuring the same properties for each individual function.

With the OpenAPI document, certain definitions in AWS SAM template are unnecessary, therefore they can be omitted. For example:

The Events property does two things;

To make this interpolation work, you'll have to include this document in the Api resource like this:

The idea is to make the AWS SAM use as minimal as possible, and have everything else done by either the OpenAPI specification or my Terraform modules.

To test run locally, a few things need to be in place:

The following will appear indicating the api server is ready:

Debugging is enabled on port 5858, you'll see this notice in the command line:

Now I can set breakpoints in my code editor and attach the debugging tooling to the debugging port 5858. This should stop execution at that breakpoint, allowing you to live view variables and the call stack.

Now that we can actually start a local api, the next thing is to actually replicate the events you can receive from other other AWS services such as DynamoDB, S3, SNS etc.

To view the supported list of events, execute sam local generate-event. Then we can choose to emulate SNS like this:

To customize it, add the appropriate flags that wish to have in the event. To list those flags:

Once we have these events, we can do a local test run by invoking the lambda directly with the event we want to test:

The last piece of functionality that makes AWS SAM such great tooling to use, is the CodeDeploy functionality. Next to support for ECS, and EC2, it also supports deployment to Lambda functions. With this service you basically get blue/green deployment out of the box for free without having to set anything up at all.

How this works is, once the CloudFormation stack (changes) are getting applied, it will use CodeDeploy for the Lambda function parts which looks like this:

Depending on the deployment strategy chosen in your AWS SAM template (under property DeploymentPreference), for instance:

It will automatically do traffic shifting from your old version to the new Lambda version code. In this example, it will shift 10 percent to the new version and 90% to your old version. After 5 minutes, 100% of your new code is deployed.

See this official article for all the available configurations.

To manage potential errors and rollbacks, this is where the CloudWatch Alarms come in that were discussed in the introduction of this chapter.

Whenever a deployment is done with CodeDeploy, it will update the CloudWatch alarm to monitor the latest version for any errors within the EvaluationPeriods specified. If the Threshold is breached, it will do a rollback to the old version.

Not all is perfect yet with AWS SAM, I've logged some of the errors and issues I came across for your convenience.

1. I'm not seeing my code changes when running my api with sam local start-api

Unlike what the CLI tool suggests, You only need to restart SAM CLI if you update your AWS SAM template, this is actually not true.

You'll need to run sam build after every code change. Hopefully this will get fixed in later versions of the tool. Links to related issues on Github;

The work around suggested is to use nodemon and then run nodemon --exec sam build next to the command sam local start-api -d 5858 -n env.json. This way any code changes trigger the sam build and you can keep the local api running in parallel.

Makes sure your Docker environment is running before you run any local invocations.

To run AWS SAM locally, make sure you run npm install in your dependencies folder. For my example, the dependencies are located in ./dependencies/nodejs

Somehow it does not find this configuration even though it is listed. To solve it, use the AllAtOnce as DeploymentPreference which also seems to work for Lambda next to EC2.

The solution here as suggest by this issue, is to add the OpenAPI version to the globals section of your AWS SAM template like this.

The inclusion of AWS SAM in our local development workflow has made things significantly more efficient and the ability to use Terraform for almost everything else keeps most of what we already did the same. The best of both worlds!

There are some definitive improvements to be made in this setup I'm sure. My first thoughts are using AWS Systems Manager Parameter store for synching parameters between Terraform and AWS SAM. For now however, the manual synching works and only needs to be done at setup time.

If you have any other idea's or improvements, let me know in the comments below.

Thanks for reading and leave a heart when you enjoyed or appreciated the article.