React + Redux are widely-used and popular technologies for developing the client-side of the web project. Such a bundle allows extending the product’s capabilities by simplifying the development of its features. Of course, that’s nothing ever perfect and these technologies are not an exception. In this article, I will show you how to avoid the challenges when using React +Redux and why you сan use Redux Thunk to streamline the development process.
JavaScript is a language with an asynchronous cycle of events. It means that all the logic is executed in one thread, but the sequence of the executable code is not defined by default. For example.

When executing the code described above, the following actions will happen:

For those who haven’t deal with asynchronous programming before, such a flow of actions may seem weird, as the message “Next statement after fetch” is last in the list and had to be executed in the last turn as well.

This peculiarity also becomes an obstacle, as the events in Redux dispatch synchronously by default. Synchronous execution of the code leads to problems with the app that requires a lot of API requests. The diagram below shows the basic idea of Redux. 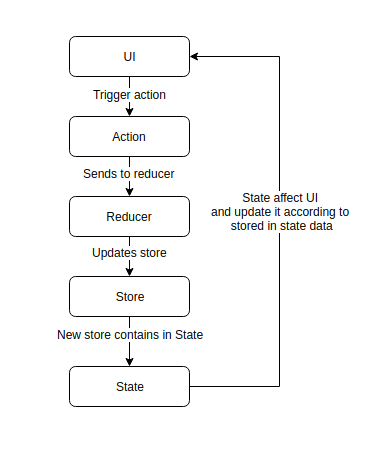 This is a linear cyclical flow of executing a certain logic. Such an approach works well and is stable when this refers to executing the linear code on the client. But in most cases, working with JavaScript on the client involves work with the network and solving the queries for receiving or updating certain data.

Each request is an asynchronous code with the callback. For this reason, when the complex client logic is implemented, it may cause some mess in code and, as a result, a number of potential errors.

Of course, it’s not what we want to achieve.

So how the programmer can simplify his/her life when it comes to the situation described above? They can do it by rendering the parts of the asynchronous logic from the components into the actions.

In such a way, the block “Action” from the diagram turns from the linear code into the set of logic that can contain branching and callbacks. Also, you can call the next actions or the whole cascade of actions if necessary. Fewer words, more actions. Let’s get straight to the examples.

This solution is based on the Redux support of the Middleware conception. Middleware in Redux allows conducting the processing or response to the event that was dispatched before the event will get into the reducer and influence the state.

In most cases, middleware is the function that processes the event and renders it to the next middleware or reducer. The functions of the middleware are similar to the chain of functions, each of which dispatches the action to the next function.

You can read more here. This information is enough to understand the main point of the solution described below.

This is a middleware package for Redux that allows to write action creators that return function instead of the action object. In addition, the internal function receives two parameters dispatch and getState.

It allows to conduct a certain logic inside the action creator, analyze the current state and dispatch the action or a number of them. It depends on the logic and you can do it not only linearly but in the callback of some network request as well.

It gives a significant flexibility in building the project logic. Below, you can see how it looks in practice

In such a way, there can be come set of logic inside the action creator with the several dispatched actions. Also, the action can be dispatched in the callback of some data request. If nothing is dispatched, there will be no any error and the state will remain in the current state without any changes.

Advantages of this approach

Connecting the middleware during the project initialization

Now let’s imagine a real case where we can use the feature described above. For example, it can be the data upload that consists of the chain of the requests of the following structure: 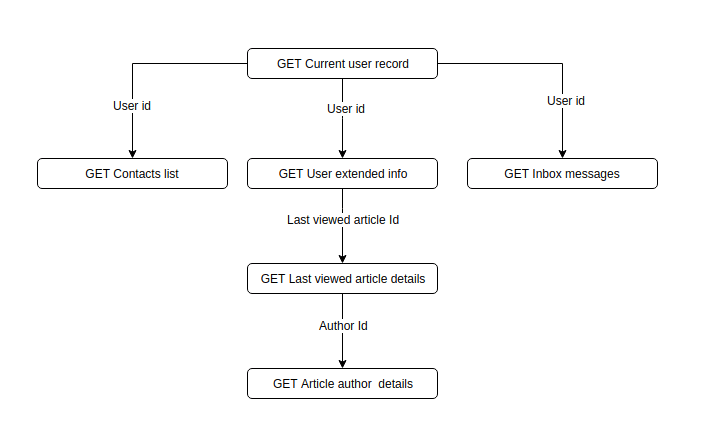 Above is the chain of the requests, where the data from the previous request are used as the parameters for executing the next one. In addition, after the execution of the request a branching can occur, where not one but several requests will be executed.

This code describes the cascade data upload (illustrated in the diagram above). Here you can see the opportunity to despatch the next action creators in the action creator or dispatch the actions that will influence the state and also execute the action dispatch separately in the callback (asynchronously). The technique, described above allows to significantly simplify development.

Redux thunk is a middleware that allows to unload the components from the logic and simplify the asynchronous code. Such approach is not compulsory but useful on the big projects when code complexity becomes a roadblock on your way to success.

The 7 Best React Component Libraries to Use in 2022

Once suspended, ronakvsoni will not be able to comment or publish posts until their suspension is removed.

Once unsuspended, ronakvsoni will be able to comment and publish posts again.

Once unpublished, all posts by ronakvsoni will become hidden and only accessible to themselves.

If ronakvsoni is not suspended, they can still re-publish their posts from their dashboard.

Once unpublished, this post will become invisible to the public and only accessible to ronakvsoni.

Thanks for keeping DEV Community 👩‍💻👨‍💻 safe. Here is what you can do to flag ronakvsoni:

Unflagging ronakvsoni will restore default visibility to their posts.