Now-a-days Web3.0 is trending and there are lot of stuffs also in talks like blockchain, NFT, Ethereum, Solidity, etc. etc..

As many of us would know about the blockchain, let's just see it's definition

Blockchain is a continuously growing list of records or blocks you can say, which are completely decentralized with distributed databases and immutable ledger meaning continuous blocks linked to each other.

So now let's move towards our topic Smart Contract.

Let's take an example for this. Suppose there is company which helps various NGO's to collect the funds for their campaigns. Various NGO's files pledged amount to their site and rest of the work is done by that company, which can also be called as "crowd-funding".

If the amount contributed by various people is equal to or greater than the pledged amount the NGO's will get the amount by deducting the some commission by the platform provider company.

Else if the money funded is not equal to the pledged amount, the money will be returned to the people.

Similarly, the smart contract's work. See the formal definition of

Smart contracts are a type of Ethereum account. This means they have a balance and they can send transactions over the network. However they're not controlled by a user, instead they are deployed to the network and run as programmed. User accounts can then interact with a smart contract by submitting transactions that execute a function defined on the smart contract.

In simple language, it is a certain set of rules written with the help of scripting language like Solidity in Ethereum , which can be considered as JavaScript.

Where the smart contract will be present in blockchain?

So when there will be a Peer-to-Peer network of blockchain where all the nodes are interconnected to each other i.e. ledger. Each node will contain a separate blockchain. So where does the smart contract will be present?.

It will be present alongside with the blockchain of node. 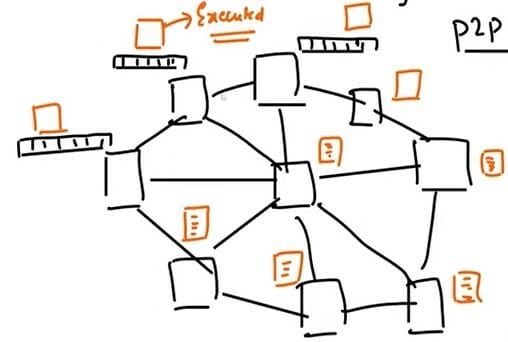 Real-World Smart Contract in use....

The discussion has been locked. New comments can't be added.

Once suspended, rutikab12 will not be able to comment or publish posts until their suspension is removed.

Once unsuspended, rutikab12 will be able to comment and publish posts again.

Once unpublished, all posts by rutikab12 will become hidden and only accessible to themselves.

If rutikab12 is not suspended, they can still re-publish their posts from their dashboard.

Once unpublished, this post will become invisible to the public and only accessible to Rutik Bhoyar.

Thanks for keeping DEV Community 👩‍💻👨‍💻 safe. Here is what you can do to flag rutikab12:

Unflagging rutikab12 will restore default visibility to their posts.