Functions are one of the basic concepts in programming. The name itself suggests, it performs a function. A function is a block of code that you can use whenever you need and wherever you required to avoid repeated code blocks. Once a function is written, it can be used over and over again. They usually take some input, perform some operations on it and produce some output.

In this article, we will learn about functions in JavaScript, different ways of defining functions, how hoisting and function scope works and a few more concepts regarding functions. Let's begin.

Functions are defined, or declared, with the **function **keyword. The declaration begins with the function keyword, followed by the name of the function then set of parentheses, which can be used for optional parameters. The code of the function is contained in curly braces.

Functions allow a programmer to divide a big program into several small and manageable functions.
For example, If you are building a simple calculator then sum() will be a function. It will take two or more integers as input and return the sum as the result.

The name of the function can be anything, as long as it follows the same rules as declaring variables.
JavaScript functions are written in camel case too. It's a best practice to tell *what the function is doing *by giving the function name a verb as a prefix. Also, the function should perform only one task and have a single responsibility. Thus naming should be based on that one responsibility.

Defining a function does not execute it. Defining it simply names the function and specifies what to do when the function is called. Calling the function performs the specified actions with the indicated parameters. We can call it by writing the name of the function, followed by parenthesis ().

Parameters are input that gets passed into functions as names and behave as local variables. A function can have multiple parameters or no parameters at all.

If you declared a parameter but did not pass an argument to it, your parameter would be undefined. It means that function parameters default to undefined.

The argument is the actual value that gets passed into the function. 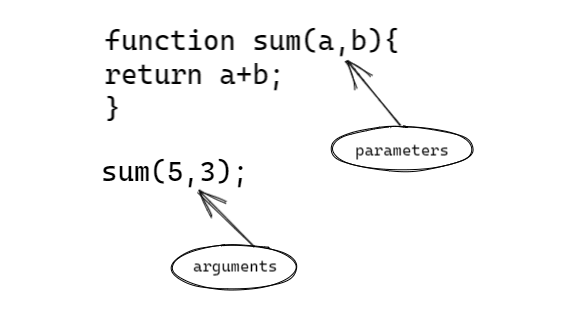 A function expression looks similar to function declarations, except that the function is assigned to a variable name.

Functions stored in variables do not need function names. They are always invoked (called) using the variable name. The function above ends with a semicolon because it is a part of an executable statement.

Hoisting was thought up as a general way of thinking about how execution contexts work in JavaScript. Hoisting means variable and function declarations are moved to the top of scope before execution. It allows you to use a function before you declare it in your code.

Function declarations are hoisted but function expressions are not.

Functions defined in a function declaration are hoisted, which means that you can use the function although it's defined below the code using it. Hoisted functions are made available everywhere within the current scope. For example

As opposed to function declarations, function expressions are not hoisted and can therefore not be used before they're defined.

Functions that are executed as soon as they are declared, these functions are known as Immediately Invoked Function Expressions or IIFEs.
IIFEs follows a particular syntax as shown below.

Let's break it down to make more sense. We have a function defined inside parentheses, and then we append () to execute that function.

The function becomes a function expression that is immediately executed.
Here are few important things about IIFEs

Arrow functions are mainly syntactic sugar for defining function expressions. Arrow function allows us to write functions in a much shorter syntax. It’s one of the most popular features of ES6. We can now create more concise, cleaner, and more readable functions by using the => operator.
The syntax is as follows

Syntax wise it’s easier to understand, remove the function keyword, declare the function like a variable, and after arguments, put a fat arrow.

Even though arrow functions are more concise than normal functions, they can still be reduced.
If the function body has a single expression, it can be written as

Also if there is only one parameter, then there is no need for parenthesis. For example, consider a function that takes a number as input and returns its square as a result.

The primary use case of arrow functions is for functions that get applied over and over again to items in a list. For example, if you have an array of values that you want to transform using a map, an arrow function is ideal.

There are a few more ways we can define functions, which aren't discussed in this article. The decision of which declaration type to choose depends on the situation.

When you declare a variable inside a function, you can access that variable only within the function. It is not visible outside of the function. For example

To visualize how scopes work, you can imagine one-way glass. You can see the outside, but people from the outside cannot see you.

A method, like a function, is a set of instructions that perform a task. The difference is that a method is associated with an object, while a function is not.

When used as object properties, functions are called methods.

I keep writing about the things I learned. So you can connect with me on Twitter, Github or Linkedin.

Add the Telegram Messaging API to your React application

Building a web3 frontend with React