It might be know to you already, that there are situations where you actually want to unsubscribe from your Observables.
There are several ways to do this. In several projects, I stumbled across a mixture of using takeWhile & takeUntil. This raises the question, why are there two of that, which sounds similar and act similarly?

Well, let's take a look at a quick example. The first code snippet we are looking at is using takeWhile to unsubscribe from an Observable.

In this example I have two different Observables. The first is created using the interval operator. This will emit notifications till the condition passed to takeWhile is falsy. Inside the takeWhile we use a boolean variable describing if the user has already clicked or not. As soon has one clicks somewhere in the screen, we unsubscribe from our interval-Observable. To determine if the user already clicked we used a second Observable created with the fromEvent operator. Additionally we used the tap operator, to log the notifications in the console. We can see that our Observable is unsubscribed as soon as there is no new log coming in.

From a high-level perspective, the code snippets don't look that different. Instead of having a boolean property, describing the state of our Observable, we now directly used the click-Observable.
We pass this Observable instance to the takeUntil operator and as soon as the user clicks somewhere, our interval-Observable will be unsubscribed from.

So all in all both code snippets look similar and behave similar, right? Well, No!
Let's have a look at the marble diagrams describing those operators because this will highlight the difference between those two operators. 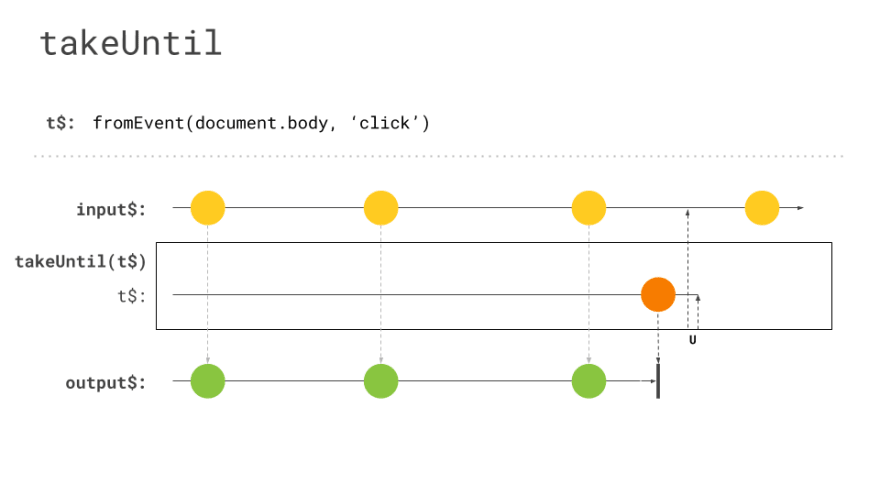 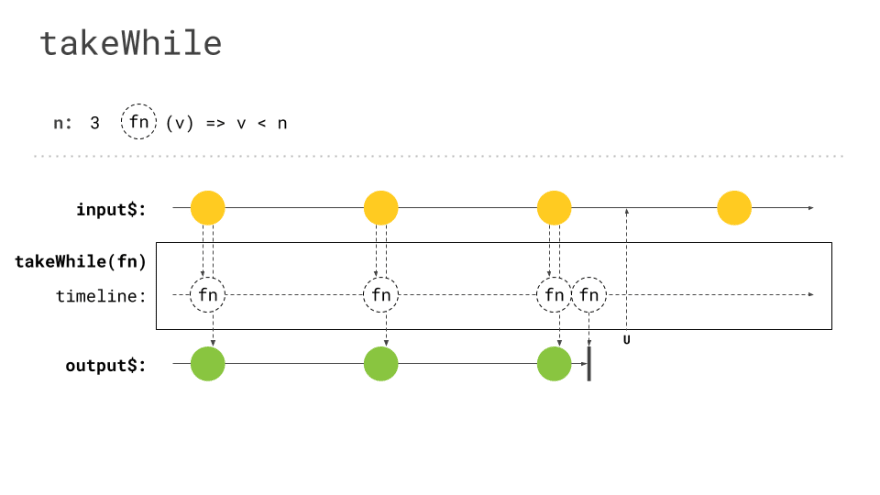 So what's the issue with this piece of code? Well, our component is already destroyed and due to the needed notification, needed before unsubscribing kicks in, we will start an animation and trigger an HTTP call. This is probably unwanted and just afterwards we will check if we want to unsubscribe from our Observable. Besides the fact that those operations are totally superfluous, it also might break our app or pollute our state.

Now maybe one might argue: "Well, I could move the takeWhile operator at the very beginning of the observable pipeline!"

That's true, you could do this, and you will save the unneeded operations, which is a good start, but you won't unsubscribe from inner observables. So if the Observable returned by makeHttpCall is a long-living Observable, it will not unsubscribe from that, if the takeWhile is before switchMap in the pipe. By the way, the same goes for takeUntil, so make sure to have the unsubscribe-operator at the very end of your pipe.

Don't get me wrong, takeWhile is an amazing operator, but just if you actually use the incoming value to determine, whether you want to unsubscribe or not! Do not depend on "global" state, when using takeWhile.
For those scenarios stick to takeUntil and use a Subject instance to trigger it.

A real-world use case for takeWhile would be a long-polling mechanism. Imagine fetching a resource describing a process. This process can be successfully completed or otherwise ongoing. For sure you just want to continue polling while the process isn't completed yet. The code for such a scenario could look like this.

For such a scenario, where we use the incoming will, to determine wether we want to stay subscribed or not, takeWhile is ideal! If we have an external trigger, stick with takeUntil.

I'm really thankful for all the amazing people helped me writing this blog posts.
This goes out to:

Back on the grind - New Years Resolution - Dev Log 35

Once unpublished, this post will become invisible to the public and only accessible to Jan-Niklas Wortmann.

Thanks for keeping DEV Community safe. Here is what you can do to flag rxjs: