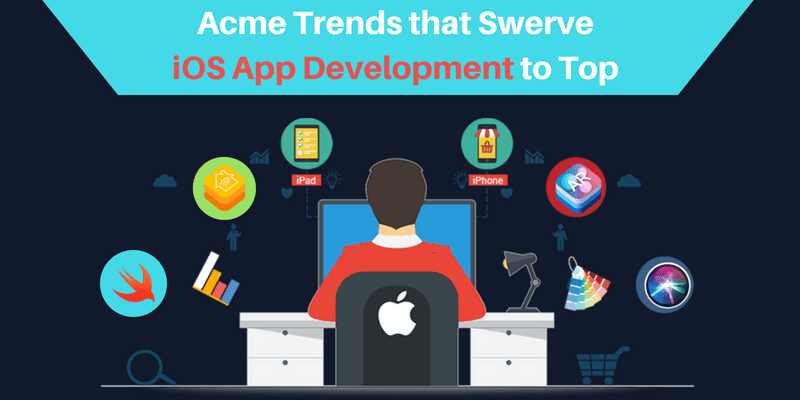 Apple launched iOS 11.3.1 a few months back which was improvised by iOS 11.4 and iOS 12 recently. Digging a bit deeper, it was found that iOS 11.4 users reported rapid battery drain post update. This problem was independent of the iPhone model which was being used. Switching off the Wi-Fi when the phone is not in use and connecting a 2.4 GhZ Wi-Fi instead of 5 GHz can do the trick, but several users reported that these tricks didn't work for them. Therefore, many of them have rolled back to iOS 11.3.1 which made the battery life normal again. iOS 12 seems to resolve this issue completely. It is therefore important to keep a check on iOS App Development trends. iOS 12 updates rolled out initially in a beta or a pre-release testing version.

Apple recently announced in WWDC 2018 that has been working on additions like a redesigned home screen app grid, a merger of the third-party applications running on iPhones and MAC's and a multiplayer mode for augmented reality games. Some more updates to features that are planned to be released by later this year are “combined apps platform”. Feature updates that iOS 12 won't include this year: Revamped “photo management” app and an update to Apple's in-car user interfaces.

One of the foremost reasons Apple succeeds with almost every update is the security that accompanies these features as compared to Android devices and feature enhancements.

Some of the iOS development trends that shaped 2017 were:

Topmost Trends that will define future of iOS App Development in 2018:

Swift programming language was developed by Apple to support iOS and Linux Operating systems. Swift 4 is the latest upgrade in Swift. Designed in a user-friendly manner it is callable, secure and robust. This will essentially ease out the development process.

Updates in SIRI and Augmented Reality

SIRI is one of the oldest virtual assistant made by Apple and is an integral part of iOS, watchOS, macOS, and tvOS. The intelligent interface works on voice queries and natural language algorithms and is going to become even more intelligent in coming times. It has made searches 10 times faster and more accurate. While people find it easy to give instant voice commands if they want to search anything rather than typing the entire message, the convenience of asking and searching just about anything and finding relevant suggestions is easier than ever. SIRI, Maps, and GPS seem to be a perfect combination if you have both of your hands on the wheel and don't know where to go. Get directions, find local businesses or find your way back home. SIRI has simplified almost navigation.

*Tap Start to begin navigation – It will automatically start within 5 seconds if you don’t respond.

*This trend is only going to increase in coming years.

Used in more than 27 countries, Apple Pay is turning out to be most dependable, fastest and widely used method of online payment. It is currently limited to transacting with only those having an Apple ID. A TouchID, FaceID, or PIN is to be used to authenticate payments via Apple Pay. It will support iPads, Mac laptops, iOS watches etc.

Apple came up with "Files" app for File Management with iOS 11.3.1. This is essentially a cloud-based application that allows a user to store all their information on device-less non-tangible storage and access it anytime anywhere. It requires a user to create a dashboard to store all images, files, and videos together. In all, the invention of cloud-based apps makes sharing of information easy.

Hybrid applications are native applications stuffed with HTML5. They make HTML5 embedding possible within a Native container and essentially combine the functionality of two platforms. Ionic, React Native, Angular.js are some of the examples of hybrid Applications.

With a purpose to automate homes, Apple HomekIt is driven by SIRI commands which allow two iOS devices to interact with each other. An increasing number of iOS app development companies are involved in creating such applications and are slowly taking home automation to next level.

People are making use of AR and VR technologies to a greater extent and introduction of ARKit2 has particularly enhanced the ability of users to work closely with AR. With a multiplayer gaming support, ARKit 2.0 has combined with augmented reality and is being used in many applications like Snapchats, Instagram and games like pokemon go etc.

This simply scratches the surface as to what all things an iOS developer must consider while development. Technology keeps evolving and has an important role in bringing about significant changes in our lives. It is favorable to pace up with emerging technology in order to stay ahead of the rivals. Top iOS App Development Companies have to stay updated with all the upcoming trends and keep developing trending apps.

Ryan Miller
Ryan Miller is BDM at ITFirms - a research based company provides list of leading IT Companies that deliver top quality results for their clientele and known for the best in development industry.
Signs that you're a Senior Software Engineer
#career #codenewbie #webdev #beginners
Where do you like to travel the most? 🏔🏝
#watercooler #discuss #showdev
Manage all your home 🏡chores with this Notion Template🔥
#productivity #watercooler #showdev